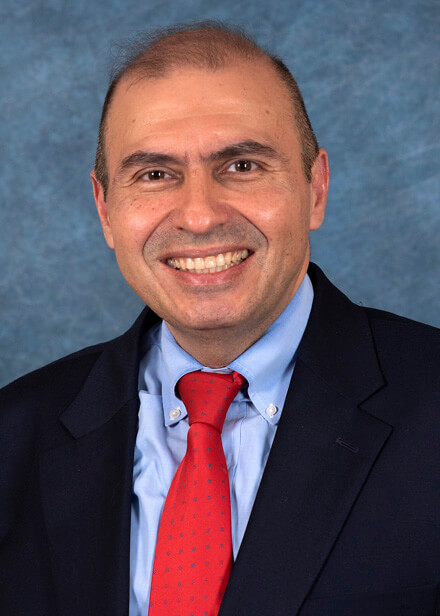 Dr. Alvarez joined Sam Houston State University in June 2019 as founding Chair of the Department of Physiology & Pharmacology in the College of Osteopathic Medicine. Dr. Alvarez is a trained physician and scientist with an M.D. degree conferred by La Universidad Libre in Cali, Colombia in 1994. He initiated his academic career in La Universidad Santiago de Cali (1996-1999), where he contributed to developing undergraduate and graduate health programs and became Director of the University Health Care facility. During his tenure as a medical practitioner, La Universidad Santiago de Cali recognized him with an excellence award for medical practice.

Interested in understanding the mechanisms leading to pulmonary edema, he traveled to the U.S., where he trained in the laboratory of Dr. Mary Townsley who trained under the lineage of the world experts in pulmonary edema, Dr. Aubrey Taylor and Dr. Arthur Guyton. Dr. Alvarez obtained his Ph.D. in Basic Medical Sciences (Physiology) in 2005 at the University of South Alabama. Subsequently, he joined the prestigious laboratory of Dr. Troy Stevens as a postdoctoral fellow at the University of South Alabama.

Dr. Alvarez resumed his faculty career at the University of South Alabama and rose to the ranked of Associate Professor in the Department of Physiology and Cell Biology at the University of South Alabama. During his tenure at South Alabama, he studied inflammatory stress responses in pulmonary endothelial cells, endothelial progenitor cell behaviors, and obesity with internationally recognized research program sponsored by several funding organizations including the National Institutes of Health (U.S.A.). He has published more than 50 peer-reviewed original articles in indexed journals and more than 90 scientific abstracts presented in professional meetings. He contributed to developing Hispanic-oriented health and educational programs and was actively engaged as a basic science educator in Physiology, Pathophysiology and Fundamentals of Clinical Practice for Graduate and medical students.

A major catalyst for Dr. Alvarez joining Sam Houston State University resides in the opportunity to work with underserved populations. To this end, several initiatives have been started to increase the number of underserved students accepted into our medical program and he has initiated research programs aimed at closing health disparity gaps in East Texas.