The Army Reserve Officer's Training Corps (ROTC) at Sam Houston State prides itself in producing quality Officers fit to serve in the United States Army. We provide Cadets with the tools to build the character and leadership skills necessary to serve as Second Lieutenants. Since its inception, the program has commissioned hundreds of Officers that have gone on to serve in the Active Army, Army Reserves, and National Guard. The rigorous training to become a future Officer covers a wide spectrum, from classroom instruction to field training exercises (FTX) at SHSU's own Gibbs Ranch. Whether you're looking for a career in the Army or just a head start in the workplace, the ROTC program here at SHSU can give you the opportunity to succeed.

Watch the SHSU ROTC Cadets take the field at halftime during the football game against Nicholls State. 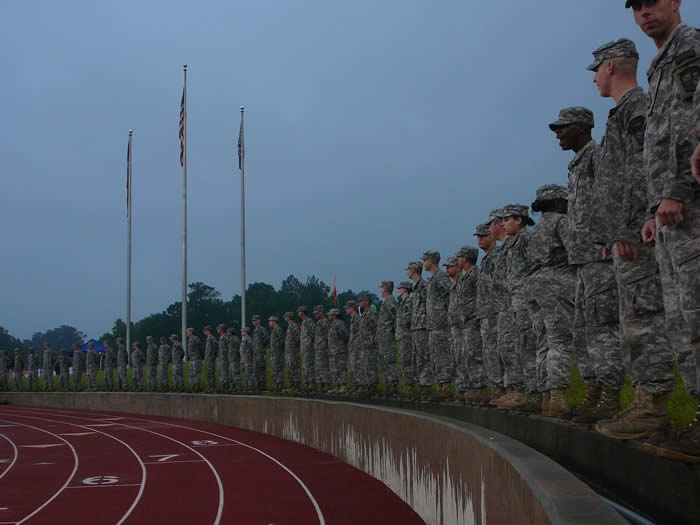 History of the Bearkat Battalion

Initially, enrollment in the SROTC program was mandatory for all qualified male students. Consequently, the enrollment grew to 1,242 Cadets by 1962. In 1965, mandatory participation ceased.

The SROTC administrative offices were displaced twice in a six-month period following a fire on 12 February 1982. The fire destroyed over 50% of the active files, 90% of the historical files, all of the furniture, equipment, military library, and numerous items of memorabilia. President Bowers assigned the Department of Military Science to the Randle House, which had complete dormitory rooms for SROTC Cadets. The SROTC administrative offices, classrooms, and supply were displaced again in April 1986. The department moved to the second and third floors of the former men’s gymnasium, Academic Building 3 where it is located today.

The Bearkat Battalion’s unit patch includes a raven, a tree, and a star. The Raven represents General Sam Houston, who was nicknamed “The Raven.” The tree represents the pine trees surrounding Sam Houston State University. The star represents the state of Texas. 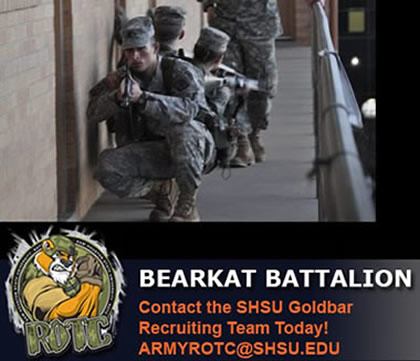