Although the Ruth and Ron Blatchley Bell Tower is a relatively new addition to the campus, it has quickly become a symbol of the university in the hearts and minds of Bearkats everywhere. The bells and clock tower were dedicated during Homecoming week in the fall of 2005, and since then have become a campus icon.

The image of the tower can be seen throughout marketing campaigns, campus slogans and social media posts and has even become a popular backdrop in graduation photos. What was once a crowded part of campus with older buildings is now an open mall for students highlighted by a beautiful beacon at the top of a hill. 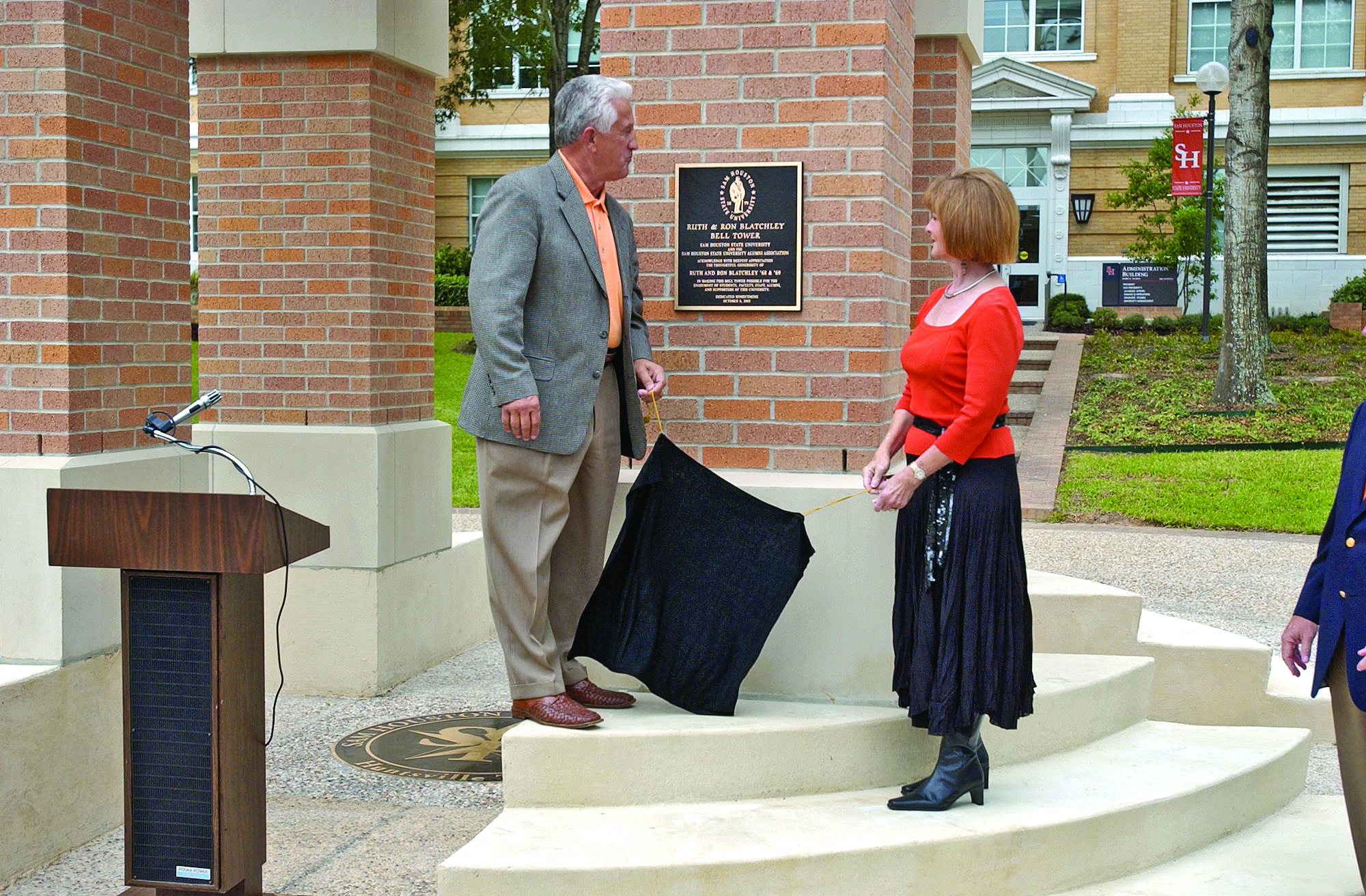 That was the goal all along for those in charge of bringing the tower to campus. According to Dr. James F. Gaertner, former university president, campus administrators wanted to create a gathering place that would stand out.

“We were searching for a focal point in the center of campus,” said Gaertner. “We wanted to hear folks say, ‘I’ll meet you at the bell tower.’”

Before the bells were brought to campus, the quarter-hourly chimes could be heard from a carillon that played over speakers perched on top of the Bobby K. Marks Administration Building. The Farrell-Wright Carillon was a system of tuning forks made to sound like bells. These tuning forks could play live or be programmed to play many different songs on demand with a modified keyboard.

As the speakers grew older, the search began for new university chimes. Eventually, this led to Ron and Ruth Blatchley, alumni who wanted to give back to the university in ways that encouraged others to do so as well.

“We wanted it to be a symbol to others that you can contribute differently than the traditional routes. Something that would suggest to Bearkats that there are many ways to give that can still have a large impact on campus,” Ron Blatchley (’68, ’69) said.

In the years since the contribution, a new mall area has added to the tower’s surroundings, with sitting areas, beautifully maintained gardens and a large plaque featuring the university’s motto: The measure of a Life is its Service.

“We love that university, we can’t tell you how pleased we are about contributing to a part of campus.”

“The start of all the central campus transformation was the bell tower,” Gaertner said.

“There were some old dorms and offices in that area, and we would show people the potential plan for that part of campus if those were torn down. That was a part of campus that needed beautifying, and it is very rewarding to see the plan work out the way it has over the years.”

The Blatchley’s have been pleased with the positive reactions to their gift to campus, even if people don’t realize they were a part of it.

“It has been a delight to hear from somebody not knowing that we had anything to do with the bell tower say, ‘I’ll meet you at the bell tower when we get over to Huntsville,’ or, ‘I took my graduation pictures at the tower,’” Blatchley said. “That is exactly what we had in mind and it is so gratifying to hear. It makes Ruth and I feel really humbled about our contribution.”

While the Blatchley’s now live in the College Station area, they still feel a strong connection to Huntsville and the legacy they have left on campus.

“We love that university, we can’t tell you how pleased we are about contributing to a part of campus.”

Today, you can hear the bells throughout campus and Huntsville, playing every 15 minutes with the standard quarterly chimes, but there are also a variety of other songs. Sam Houston State University’s fight song is played each day and there are also special songs for rainy days, holidays and even a selection of Beatles hits programmed into the system. In total, the bells can perform more than 200 songs.

Bearkats might also be surprised to learn, that although the Blatchley Bell Tower has only been on campus for a short period of time, it is already steeped in tradition. Students who are still working on their degrees are told to be careful where they step while enjoying the sounds of the campus bells. There is an urban legend that if an undergrad walks directly underneath the tower before graduation, they will end up ‘adding to their degree plan’ by a semester or two.

So, if you know of a fellow Bearkat who has yet to graduate, be sure to warn them to watch their step around the bell tower.