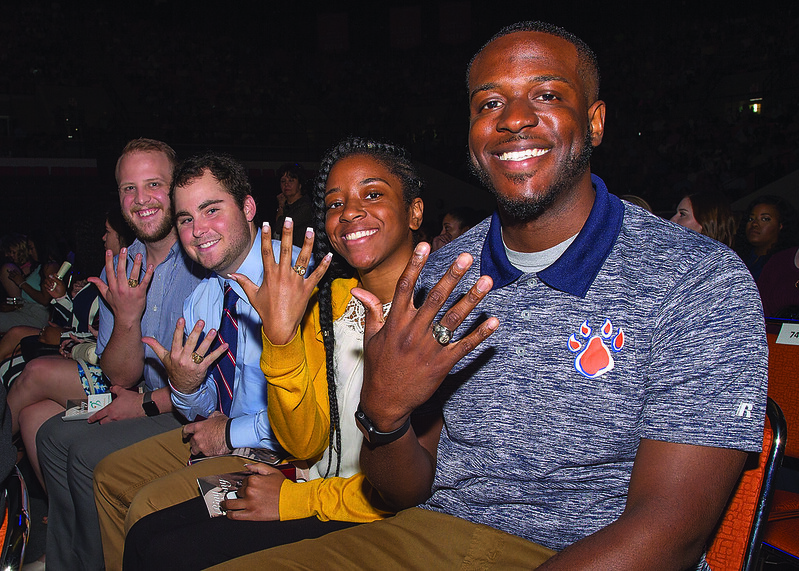 Sam Houston State University’s long and storied history has given rise to many unique traditions on campus. Our identity was founded on our namesake and SHSU holds several annual events that narrate the story of our remarkable heritage.

Traditions are an integral part of campus life at Sam Houston State and help define our culture. From Homecoming to the Tree of Light ceremony, these long-standing traditions can be shared across generations and bring Bearkats together with a sense of pride and belonging. These enduring traditions provide us with a sense of timelessness and continuity; whether it is attending every Bearkat football game, paying homage to members of our Bearkat community who have passed away at the annual Raven’s Call or marching to Sam Houston’s gravesite in Oakwood Cemetery on Texas Independence Day, these traditions are entrenched in student life and allow us to connect with our classmates, alumni and alma mater.

Each year, Sam Houston State University marks a number of celebrations, some dating as far back as 1893. The experiences and memories evoked from these events bond us together as part of a distinctive group. Here are a few enduring customs, some sacred and some silly, that provide an insight to campus life and inspire life-long Bearkat loyalty:

Battle of the Piney Woods

One of the oldest rivalries in the state of Texas, the Battle of the Piney Woods pits the SHSU Bearkats against the Stephen F. Austin Lumberjacks. The Bearkats versus Lumberjacks rivalry dates back to 1923 when the first game was held in Huntsville. To date, Sam Houston holds a 51-35-2 edge in the series. This year, Battle of the Piney Woods will be held on October 6 at NRG Stadium. Buy your tickets so you can help cheer on the Bearkats to their 8th win in a row!

Established in 1921, the Tree of Light Ceremony is one of SHSU’s oldest and revered traditions. Although the ceremony has evolved over the years, several of the festivities have remained unchanged, including the lighting of the tree by the University President, the donation of canned food items for those in need and student group performances.

The notion of Homecoming was introduced to college campuses in the early 1900s as a fall celebration of the first football game of the season. Although football made its debut at Sam Houston State in 1911, the university did not begin celebrating Homecoming until 1931. Part of the longstanding Homecoming traditions at Sam Houston include the Homecoming Parade, in which the President serves as the Grand Marshal, and the King and Queen’s Court. However, for many years, from the 1920s through the 1970s, SHSU only had a Homecoming Queen, but no King.

The Ruth and Ron Blatchley Bell Tower is one of the most photographed campus landmarks. Around commencement, it has become an unofficial tradition for graduating students to dress in their full regalia and pose under the tower for their graduation photos.

SHSU hosts a Ring Ceremony for students and their families to celebrate their time at the university. The official SHSU ring symbolizes academic achievement; it is reserved exclusively for graduates and those students who have completed 75 credit hours. Cast into the inside of the ring, as with Sam Houston’s ring from his mother, is the word “Honor.” On the eve of the ceremony, the ROTC escorts the rings to General Sam Houston’s home, located on the grounds of the Sam Houston Memorial Museum, where they are housed and guarded overnight.

Bearkat All Paws In

With SHSU’s motto, “The measure of a Life is its Service”, it should come as no surprise that one of its largest traditions focuses on service within the local community. Bearkat All Paws In is the largest volunteer initiative at Sam Houston State. Since 2010, Bearkat All Paws In, hosted by the Student Government Association, has completed more than 10,000 hours of community service to the university and Huntsville area.

Undoubtedly, these and many other long-established traditions are also the things that Bearkats hold most dear to them as they serve as a connection to our university’s past, enrich the campus culture of the present and point the way to our future.