This is the very piece that began the entire Ponchielli project. Its creation and even the identity of the intended soloist have defied weeks of research in the Archivio di stato in Cremona. Further, even the well-documented date of its premiere is shrouded in mystery. It has been variously listed in editions of Grove Dictionary of Music and Musicians since the early 1950s. Its full identification was not apparent until the article on Ponchielli that was written with Dr. Licia Sirch's catalog of Ponchielli's music had appeared. Apparently, most of the eager souls who sought this work inquired and received microfilm from the Biblioteca statale. Their problem was, however, that the version in the library was a copy while the actual autograph manuscript was held (at that time) by the Museo civico Ala Ponzone. Luckily, this author was directed to the museum where Dr. Andrea Mosconi kindly supplied a microfilm of the autograph score. In spite of a muted response from colleagues, this (likely) first ever euphonium/baritone solo may be the single most-performed piece by Ponchielli in the world today.

While Achille Bissocoli enjoyed a long tenure in Ponchielli's band, the records leave vacant any names of band members in the roster for 1872. There are two Vicemaestri - Bissocoli and Cesura, but there is no document heralding a flicorno basso soloist after the preliminary roster of 1865. While one of the earliest concerts by the Cremona band includes an extra performance trip from Donizetti's Roberto Devereaux, the name of the flicorno basso (tenor) soloist cannot be recovered. The "official" list of 1866 leaves the position vacant. Part of this may have been to reinforce the brutal assessment accorded Johannes Haagen by the audition committee in January of 1865. Clifford Bevan has been very kind about this work; however, it must be stated in respectful disagreement to his analysis that the baritone, not the euphonium, was the modern successor to the flicorn obasso. As noted above, the flicorno basso was always cast as the tenor soloist in its function as a member of the band's operatic quartet, while the bombardino "sang" the baritone roles. As one examines the scores, the same part is often shared by the flicorno basso, bombardino, and first trombone in tutti passages. All were, of course, fitted with the rotary valves that the years of Austrian rule had left as a tradition. A newly-edited solo part with the ossia can be found here.

One important find was the autograph program for the concert. The subsequent newspaper postings point to the actual "real" first performance finally occurring on March 31. In 1873, Ponchielli's last contracted year, there were no performances with any brass soloists. Ponchielli even leaves the posting of the concerts to the two Vicemaestri after the December 29, 1872 concert. 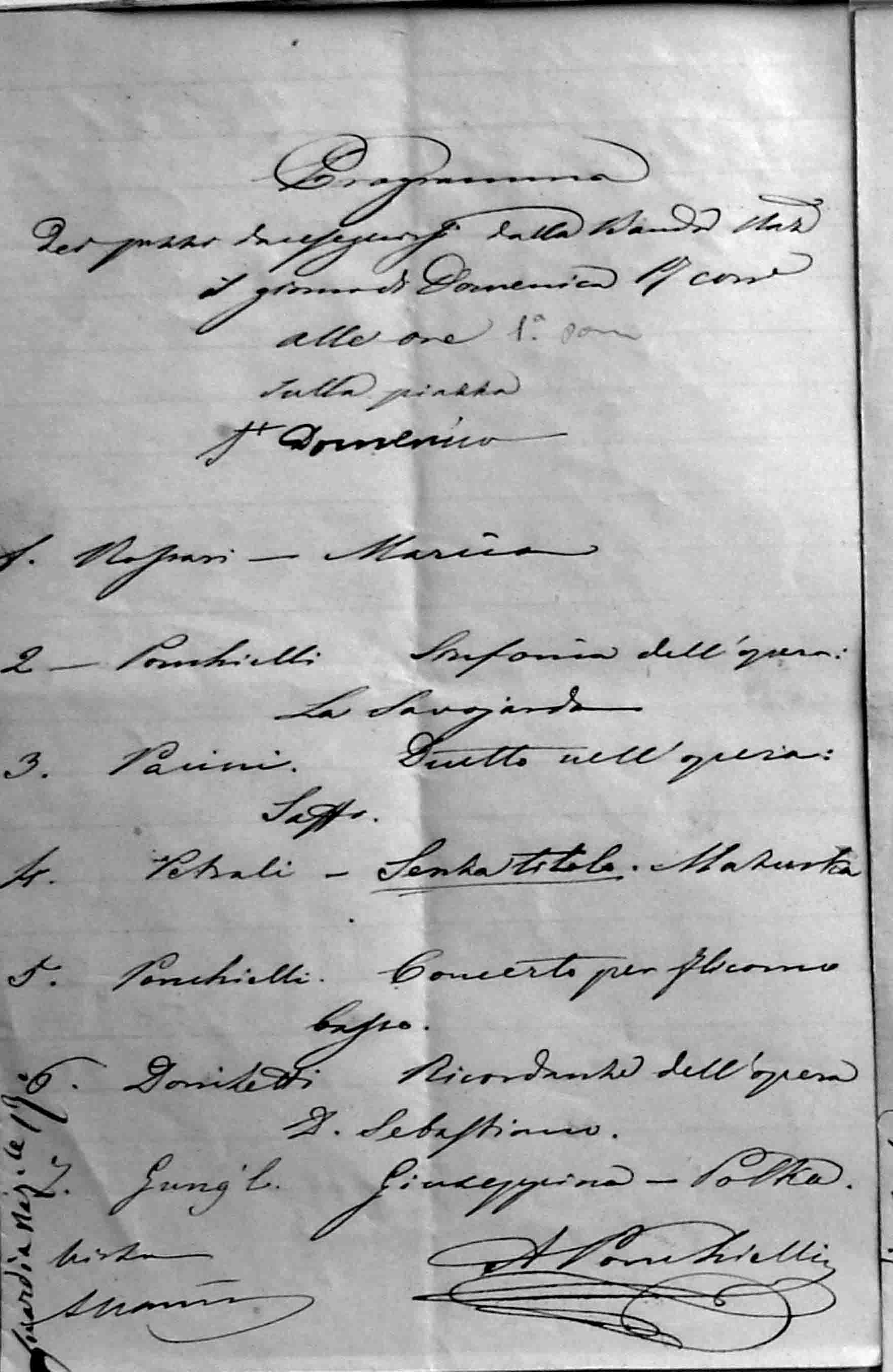 If one will examine the autograph program closely, one can read "Piazza San Domenico." This space, the site of the recently demolished Dominican church (and the gravesite of Antonio Stradivari), had already been renamed "Piazza Roma". Further, the band's "barracks" were housed in the monastery that had been part of the church complex, now the northern end of the Piazza Roma. This "mistake" by Ponchielli might have been the result of the prospect of a new version of Promessi sposi whose success in December, 1872, would finally garner him the attention he had sought for so many years.