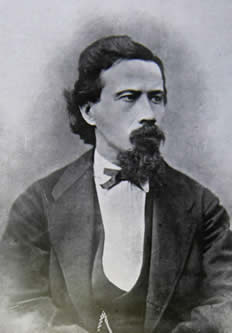 When Amilcare Ponchielli began his musical life he cannot have imagined the career he would have as the Maestro of a municipal band. His years of training at the Milan Conservatory (that had refused Giuseppe Verdi) had prepared him to be a pianist and organist. His real interest lay in composition, but he had, as early as 1854 upon his graduation from the conservatory, been active as a conductor in various provincial opera houses.

The photo at the left presents him in his late twenties, as he would have appeared in his years as capobanda in Piacenza and Cremona.