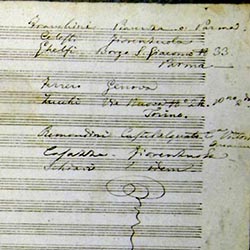 Since the 1921 publication of Arnold Schering's Die Leipziger Ratsmusik von 1650 bis 1775, musicologists have turned their attention to the men (and more rarely women) who were the intended performers. Given the hyper-virtuosity represented in this repertoire, one may assume that the members of the two bands were exceptional performers by even today's standards.

The hierarchical structure of the band somewhat resembles the age-old guild structure that served the skilled jobs of Europe since the before Middle Ages. At the top were the principal players (masters) who also had to teach in the "school" that was an important part of the band's responsibilities to the community. The mid-level players often had very simplistic parts and corresponded to the "journeymen" who were skilled but lacked the experience or skill level to be "masters." Of particular importance to the band in Cremona was the continued use of five "allievi effetivi" or "activated" students who were a necessary part of the functioning band.

A measure of Ponchielli's concern over the Cremona situation can be found in a score in the hand of Johannes Haagen, the Austrian Vicemaestro Ponchielli inherited on his return. In score order Ponchielli writes the names of eight members of the Piacenza band and where they might be located. The eight names are Franchini, Celesti, Ghelfi, Ferreri, Zucchi, Remondini, Casazza, and Favari.

The rosters below are in score order. The original rosters divide among the principal and secondary players.

Roster of 1861 Band in Piacenza

Roster of the Re-organized Cremona Band of 1865