The Global Center for Journalism and Democracy is just back from training journalists in Beirut to cover the Oil and Gas Sectors. GCJD organized the seminar in partnership with the Skeyes Center for Media and Cultural Freedom.  The event, which took place at the Riviera Hotel in Beirut on March 15-17, 2013 brought together journalists working in Lebanon and trainers with expertise in the fields of journalism, the industry and the environment. The goal of the training was to provide fundamental knowledge about Lebanon's oil and gas resources, to help journalists understand the phases of development, and to identify the many challenges that are sure to be met along the way.

The seminar began with an overview of the background and current status of the oil and gas sector in Lebanon by Mona Sukkarieh, co-founder of Middle East Strategic Perspectives. “People here are thinking we are on the way to becoming the next Abu Dhabi,” Sukkarieh said, which is not necessarily the case. Sukkarieh  predicted it will likely take until 2020 for Lebanon’s gas to reach the market. 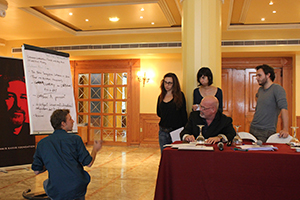 Participants brainstorm in a breakout session

In the second session, Chris Huntington, a former CNN reporter and a partner with New Energy Fund Advisors, addressed what journalists need to know about the oil and gas industry in regards to terminology, technology and legal treaties pertaining to the eastern Mediterranean region. Huntington provided an overview of recent technological advances that have allowed offshore, or deepwater, oil and gas reserves to come under development, but cautioned that there is still no safe or efficient way to transfer the oil and gas back to the shore.

In Friday’s final session, Claude Salhani, a veteran Middle East correspondent and frequent contributor to OilPrice.com, gave an overview of different skills and strategies to use while covering the oil and gas sector in the Levant. He emphasized the need to understand the broader context of history, economics, environment, and conflict that all come to bear when reporting on energy. The second day began with a session led by Jessy Trad Kastoun, a senior producer and business news anchor on Lebanon’s MTV channel. Kastoun spoke in depth about the functioning of oil markets.

Timothy K. Maloy, a business reporter covering the oil-driven economic boom in Iraq’s Kurdistan region, led a training session on the fundamentals of reporting on the oil and gas markets. He used the volatility in the oil markets in 2008 as a case study in developing stories that make the complexity of the oil and gas markets relatable to readers.  In the third session, Laury Haytayan, the MENA Senior Associate at the Revenue Watch Institute, and Diana Kaissy, the MENA coordinator for Publish What You Pay, presented on transparency and governance in the oil and gas sector.

The final day of the seminar began with a workshop led by Kris Van Orsdel, a government affairs specialist and policy analyst who worked with Ocean Conservancy to advocate for the restoration of the Gulf of Mexico’s ecosystem following the BP Deepwater Horizon oil spill. The workshop focused on the lessons that can be learned from the United State’s experience with oil and gas development in Louisiana in order to avoid making the same mistakes that led to environment disasters.

Ben Van Heuvelen, managing editor of Iraq Oil Report, led the final workshop of the day, which used examples from around the world to focus on best and worst practices in oil and gas development. Van Heuvelen began by speaking about the ‘paradox of plenty’ whereby countries that suddenly begin developing their natural resource wealth actually suffer more negative economic consequences than they experience benefits.

The final session of the conference consisted of a screening of Aaron Sorkin’s HBO television series “The Newsroom”. The episode touched on relevant themes addressed during the conference and was followed by a group discussion about lessons learned from the conference and challenges and opportunities facing journalists covering the emerging oil and gas sector in Lebanon. 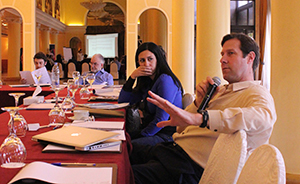 Participants at the Oil and Gas sector seminar

Following the seminar, Matt Nash, a journalist with NOW Media, said the technical information provided by the trainers was very helpful. “I’ve never seen this before,” he said. “I’ve never seen an industry built… so, its good to hear from other seasoned professionals.”

Christne El-Cheikh, a journalist with Al Sumaria news agency, said she was impressed by how knowledgeable and open the trainers were. Talking with the trainers, and the seminar in general, helped to rejuvenate her motivation as a journalist, she said.

The seminar on covering the oil and gas sector in Lebanon was the second event organized this year jointly by SKeyes and the Global Center for Journalism and Democracy. The previous conference focused on covering international justice and took place in Beirut on January 18-20.

Outside View: Future of Levantine Basin>>

How much gas revenue will be stolen?>>