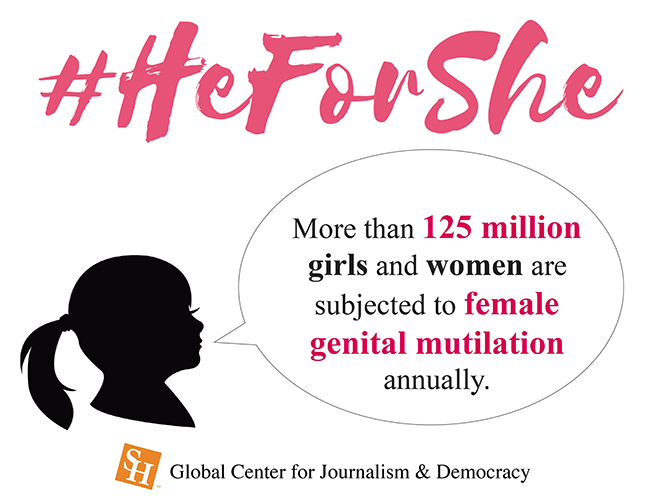 GCJD spent the first week of November bringing awareness to the lack of gender equality that still exists around the world.

The center teamed up with the international campaign HeForShe, which was created by the United Nations in an effort to encourage boys and men to participate in spreading awareness about this human rights issue.

To kick off the campaign, GCJD took a group of student advocates to a Houston Rockets game. The NBA has been a leader is spreading awareness on the gender equity front especially as it concerns its sister league in the WNBA.

Before the game, SHSU students heard from Gretchen Sheirr and Gersson Rosas; both Vice-Presidents within the Rockets organization. They spoke about how they overcame the odds to get where they are today, and how important it is to help up and coming professional women in the league.

The advocacy campaign continued with a visual student demonstration entitled “Locked Up” . Female students were locked inside a jail cell to demonstrate how women are trapped in the workplace, without opportunities for high level promotion.  In order to demonstrate how men can aid in destroying the glass ceiling, male students were encouraged to take the HeForShe pledge for gender equity so their female counterparts could be released.

On Wednesday, GCJD teamed up with the campus step organization KHAOS to provide performances throughout the afternoon. The  dancers incorporated statistics about gender equity and encouraged students to continue to take the HeForShe pledge.

The final day’s program was entitled “My Story” and it sought to put a face to the issues that had been discussed throughout the week. Student volunteers memorized stories recounted by victims of the lack of gender equity and walked around campus with a sign reading “Ask me about my story”. Students were encouraged to ask and listen and again sign the pledge to fight for gender equity moving forward.

Around campus, GCJD strategically placed yard signs with statistics and information on gender inequality to reach staff, faculty and students who may not have been around for various demonstrations and events.