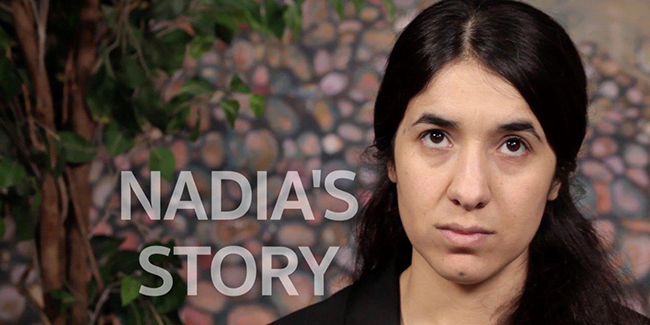 Nadia Murad has a painful story to tell. She was kidnapped and enslaved by ISIS;  part of the terror group’s attack on her small Yazidi community. She witnessed the murder of her family, and support system in her village of Kocho.

After being savagely and repeatedly raped, and abused, she managed to escape.

Instead of trying to forget and get on with her life, she continues to relive the horror. She travels around the world, making sure no one forgets about the other young Yazidi girls still in captivity.

On Thursday, November 17th 2016 , she brought her story to SHSU. The Global Center for Journalism and Democracy in cooperation with the College of Criminal Justice were privileged to be able to host the Nobel Nominee and one of Time Magazine’s Top 100 most Influential Individuals.

At 21, and about the same age as many of the students in the audience, Nadia’s quiet demeanor betrays her strength. An audience of nearly 300 sat in rapt silence as she tentatively told her story. Some in the audience were brought to tears.

In her new role as UN goodwill ambassador, she says she will continue to fight for justice.