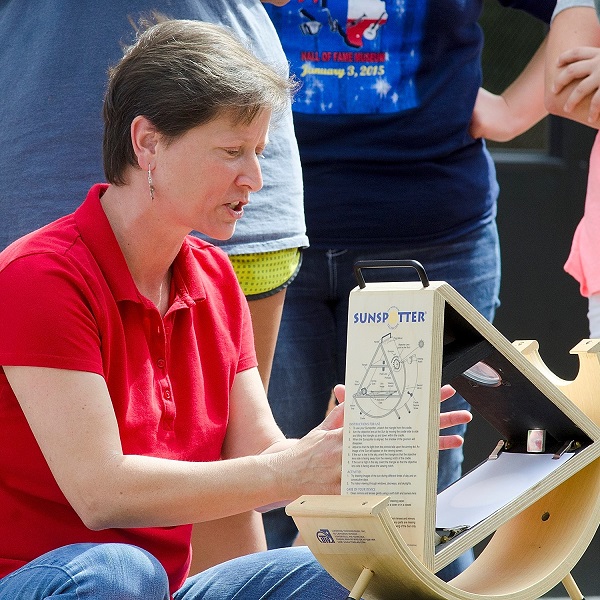 Each year, Sam Houston State University honors faculty members whose teaching, scholarly accomplishments, service, and academic engagement stand out among their peers. C. Renée James, Professor in the Department of Physics & Astronomy, is the recipient of the 2022 Excellence in Teaching Award for her tremendous impact on others in the classroom.

Professor C. Renée James has dedicated her life to improving science education. This, she believes, is one of the surest ways to avoid the crisis her childhood idol, Carl Sagan, said would happen in a society based on science and technology in which nobody understands either.

This unwavering devotion to her craft and dedication to the students around her have helped earn the physics and astronomy professor Sam Houston State University’s 2022 Excellence in Teaching award.

“She maintains precise command of a very large group of students, keeping their interest, attention and respect,” said one of James’ colleagues. “She also gives immediate and direct responses to the prior meeting’s feedback reports, generating engagement and buy-in from students as their voices are heard and validated.”

James, along with colleague Professor Scott Miller, helped shape the university’s required science curriculum with the design and instruction of popular introductory astronomy courses Stars and Galaxies and Solar System Astronomy. The pair also knew there was an even better way to manage a large class and submitted a proposal for an Engaging Classrooms Quality Enhancement Plan (QEP) grant, which they were awarded in 2021. The program converted the large Farrington astronomy classroom into an optimized active learning space during the summer of 2021.

“A single, large group is impossible,” James said when asked how she ensures a class of 100 absorbs the same information as a class of 30. “But when you break them down into a bunch of smaller groups, then you have the possibility that those smaller groups will be engaged and, once you keep adding more and more smaller groups, you are essentially doing the same things, you just have a lot more walking to do in the classroom.”

Both James and Miller knew how to approach large class sizes and smaller groups, but the grant allowed them to make their vision a consistent reality in the classroom.

Along with group work, James has incorporated several familiar strategies into her curriculum in an attempt to create a distinctive experience for her students. These strategies include social media, blogs and activities aimed activities designed to confront student pre-conceptions head-on can be so impactful.

In the past, James received support from NASA to help regional secondary science teachers better understand content in an ambitious effort called Astronomy Summer School of East Texas (ASSET). This project, which began in 2012, was funded for four years. It resulted in several helpful activities involving real NASA data that was shared with numerous area teachers to help them understand the material better and pass it on to their students at and earlier level.

“During a normal semester, I can reach about 100 students,” James said. “But if I can reach the teachers of high school kids or middle school kids, I am reaching all of their students, too.”

James and Miller were co-investigators of the ASSET program. James, referring to her favorite Sagan quote, tied the project into her greater life goal of educating as many people as possible in the field of science, using astronomy.

James is no stranger to outside recognition, whether it be from her peers, students or various organizations. 2022 marks the fifth time she has been a finalist for this award. She was also designated as a Texas State University Regents’ Teacher in 2021 and was one of five Silver Jubilee Visiting Professors selected from across the globe to present public lectures and workshops to pre-service science educators at Edith Cowan University in Australia in 2016. Her vast field work and attempts to spread knowledge have taken her to Australia on multiple occasions, including her work with the ASSET program.

In 2010, she was one of 10 educators in the U.S. to earn the NASA/Initial Graphics Exchange Specification (IGES) “Gold Star” for Inspiring Uses of Hubble in Education. She was also elected to the national Astronomy Education Board of the American Astronomical Society, which she served from 2003-06. Two years later, she earned the Society’s Popular Science Writing Award in the Solar Physics Division.

James has numerous publications, including two books titled “Science Unshackled” and “Seven Wonders of the Universe you Probably Took for Granted”, which are aimed at expanding the scientific interest and literacy of the public. She is also working on a third book, titled “Things That Go Bump in the Universe”.

“I am currently teaching this class called Cosmic Catastrophes,” James said. “There wasn’t really a book I wanted to use that felt right, so I got a grant to write it. It is not only going to be something that public can read, it is not a textbook, but it will lay a foundation for this class.”

James has been a professor at SHSU since 1999 and called university personnel extremely supportive with a desire to impart their knowledge onto the student body. Because of her colleagues’ passion, James was surprised to receive the Excellence in Teaching distinction amongst such worthy competition.

“I do the things I do in the classroom because I want my students to love the subject as much as I do,” James said. “You need people in the classroom who love what they are doing and you want to convey the importance of what they are teaching. If you have those two things, I think you have an outstanding faculty. It blows my mind that, from all those people on campus who also share that philosophy, that somehow I would get anybody’s attention.”