Each year, Sam Houston State University honors faculty members whose teaching, scholarly accomplishments, service, and academic engagement stand out among their peers. Madhusudan Choudhary, professor of biological science, is the recipient of the 2022 Excellence in Service Award for his tremendous impact on others through service. 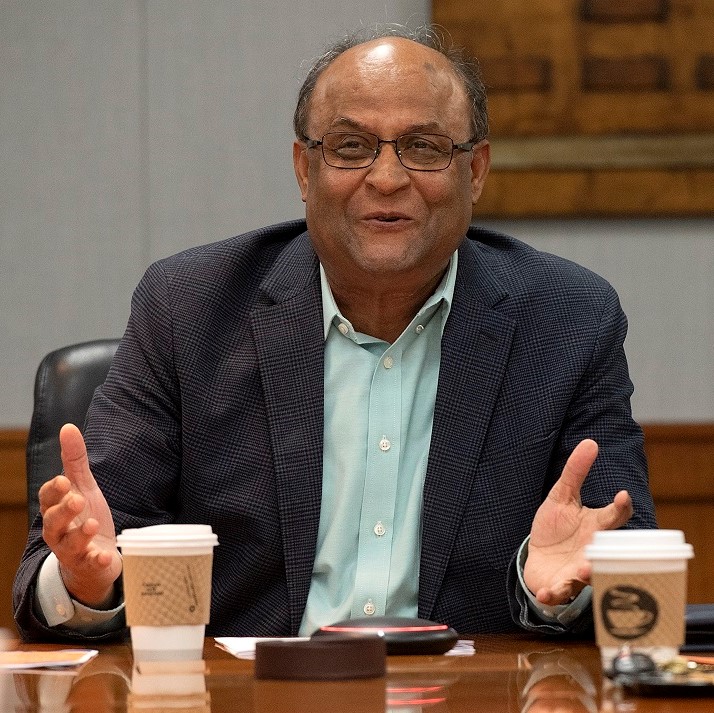 If the measure of a Life is its Service, Madhusudan Choudhary’s life and contributions to his field are truly immeasurable. His list of services to the community seems, at a glance, to be never-ending, which helped earn him Sam Houston State University’s 2022 Excellence in Service Award.

“He is not just a teacher but a mentor who motivates, guides, inspires and creates an environment in which students become lifelong learners,” said one of Choudhary’s colleagues. “I have come across a number of students who admiringly acknowledged his role in their academic interest and success, and in shaping up their career goals.”

Choudhary has worked as a professor of biological sciences at SHSU since 2008. After earning his PhD at McMaster University in Ontario, he attended Duke University for his postdoctoral studies before working as a senior associate to a professor at the University of Texas Medical School. This is the second Faculty Excellence Award he has received at SHSU, including an Excellence in Research distinction in 2016.

“I am very humbled and honored,” Choudhary said on receiving the award. “I am happy that SHSU and the selection committee really looked deep and selected me. Even if I didn’t get this, I would keep serving because that is my goal and objective in life. I have been very fortunate and I feel blessed.”

One of his most notable service projects impacts students locally as well as many across the globe in the Indian state of Bihar, Choudhary’s original home. The Academy for Scientific and Professional Inspiration in Research and Education (ASPIRE) brought together local public administrators, educationalists, social workers and business leaders to promote scientific education in Bihar.

“I am trying to repay what they have invested in me in an intellectual way to a younger generation so that they can aspire to come over to the U.S. for better educations,” said Choudhary, who would make personal trips to Bihar for the project prior to the COVID-19 pandemic. “We conducted a six-week summer science and math camp in remote village schools and engaged those school children in active learning and critical thinking through community engagement projects to solve local problems.”

American college students volunteered for activities to promote the concept of a global learning village.

Choudhary had been making a difference in his home state of Bihar long before ASPIRE. He is a founder of the Bihar Association of North America (BANA), which was formed in 2008 and operated through 2020.

“The association was engaged in various social and cultural activities, such as Academic Fest, Cultural Carnival, seminars and volunteer activities for food drives and charity funds,” Choudhary said.

He served as BANA’s president for two years and was honored with a lifetime service award for his work in 2012.

Choudhary’s vast range of services include advancements to the department of biological sciences, including his work to help develop a rigorous graduate program in biology as well as overseeing an undergraduate scholarship committee, which awards over $100,000 worth of scholarships each year. He has also gone above and beyond in his recruitment contributions to the College of Science and Engineering Technology (COSET) and was instrumental in establishing the college’s mission and vision statement.

He has served on a number of committees for SHSU, including six years on faculty senate. He was the director of the Center for Enhancing Undergraduate Research Experiences and Creative Activities (EURECA) for four years, beginning in 2018. Their mission is to advance the culture of scholarly and creative excellence by cultivating and developing faculty-mentored, discipline-specific inquires among undergraduate students. The program supports two internal grants: Faculty and Student Teams (FAST) Awards and Student Travel and Professional Presentation (STAPP).

One colleague wrote that EURECA “fosters undergraduate research in every way” and is a “considerable service to the student body at SHSU.” Some of the program’s new initiatives include expanding opportunities for students to engage in research across campus as well as building out a student-led STEAM Team to advocate and develop opportunities for students to participate in research and sponsored programs while at SHSU.

Outside of the university, he serves on five editorial boards and is a member of four professional societies. It is impossible to list all of the important organizations he has played a role in, but his service to the university and communities abroad are, as stated, immeasurable.