When it comes to selecting a career path, there are those who ponder the question for years while others find their niche early on and dedicate themselves to it wholeheartedly. Gerald Banaag is the latter, having started teaching while he was still in school himself back in the Philippines.

“When I was in high school, my teachers already pushed me into teaching by asking me to teach the class when they were out,” he said. “Then as I was about to go to college, I took an examination in one of the universities, got a scholarship and told myself this is the opportunity I need. That way, my mom doesn’t have to spend money for my education.”

After completing his bachelor’s, Banaag began working on a Master of Arts in Mathematics degree and kicked off his teaching career in the Philippines when tragedy struck. His father suffered from a stroke and required expensive medical care. To help his mother with these expenses, Banaag sold his assets in the Philippines and moved to the North Carolina in 2015 and began working as a teacher.

He moved again two years later to South Carolina, where he met Bearkat alumnus and Army servicemember Brett Roberts. At the time, Banaag was looking for a university where he could complete his master’s degree when Roberts introduced him to Sam Houston State University, which not only had the program and courses he wanted but provided them in a fully online format.

“I had been looking for a university that offers a master’s in mathematics, Banaag said. “I tried the universities in South Carolina and even in Washington, but they’re not offering the courses and the degree I wanted. When my husband suggested Sam Houston State, I realized this was the school for me. Ms. Bullock, my academic advisor, and the whole college were very accommodating.”

Thanks to coordination with his advisor, professors and husband, Banaag was able to continue teaching in South Carolina while pursuing his degree. He says that Roberts has cheered him on every step of the way and offered support, even while stationed in South Korea. 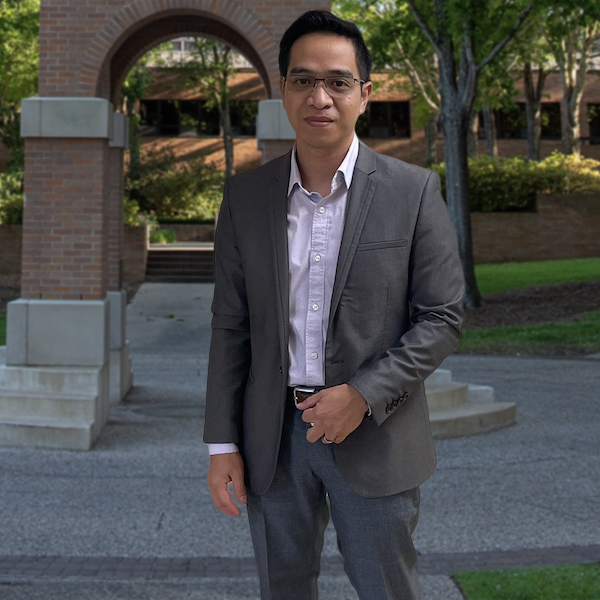 “He gives me all the time I need to focus on what I must do,” Banaag said. “He will do the errands and house chores just so I can focus on what needs to be done, not to mention, he gave me part of his G.I. Bill scholarship. This is all because of him; he introduced me to Sam Houston State and supported me all the way.

Thanks to this support, Banaag was able to make a mathematic discovery to help numerous students in their studies of geometry and algebra. His research work has allowed him to provide students with a new way to approach certain mathematical equations. While making the finishing touches and edits on this capstone project, Banaag credits assistance from his advisor and professors for his ability to make such a discovery.

His support team has made a lasting impact, from professors and other university team members to his loving husband, who introduced him to the university. Through a campus visit, and a look into the classrooms his professors taught in, Banaag was inspired to move from teaching in secondary schools to eyeing a spot as a professor.

“The best thing I experienced when I went to the campus was one of the classrooms,” Banaag said.  “It felt like something I want to do. I want to teach in college, this is what I want to do in the future.”