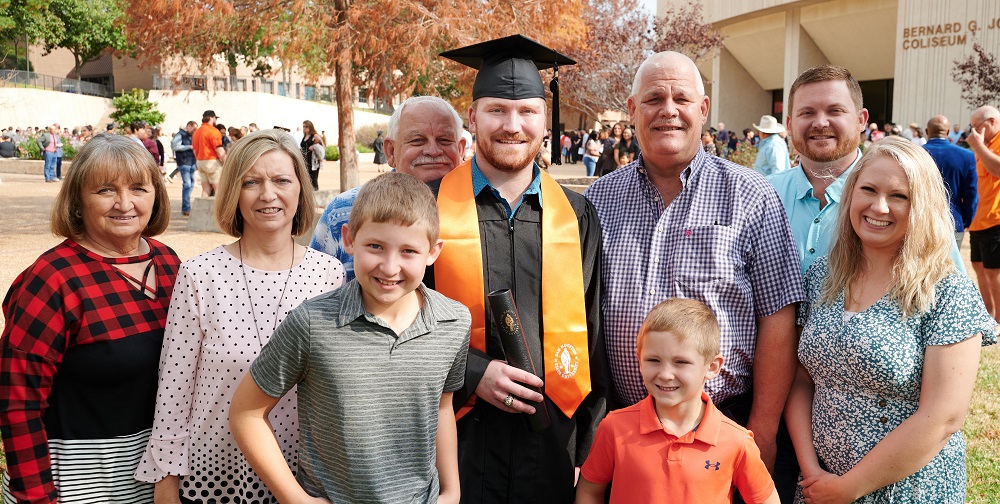 Colton Adams has never been interested in your sympathy.

In fact, he describes the horrific incident that resulted in the loss of his leg from the knee down as a “temporary setback” on his life journey.

However, as he laid in the dirt beside Interstate-45 after being struck by a rogue 18-wheeler in June, the Centerville firefighter only wanted to call his father and assistant chief to explain he had done everything by the book. While his actions were never in question, this sole desire in what he believed could be his final moments speak to his tenacious love for family and service.

“Make every day count,” Adams said. “You never know what is waiting around the corner. I learned that attitude can make or break you when faced with adversity. SHSU’s motto is The measure of a Life is its Service, and service is what I was born to do.”

In fact, his entire family was born to serve. Adams comes from a long line of first responders, including his father, John T. Adams, who serves as Centerville’s Assistant Fire Chief and was formerly a law enforcement officer. His brother has also served in the department for over 20 years, currently as a Vice Chairman.

“From the time I could walk I was on a firetruck,” Adams said. “The day I turned 18, it was official: I had a set of gear. This is what I do and this is what I will continue to do. I got hurt doing it and, unfortunately, a woman died on that scene. As many mental issues as I have because of that, nothing is going to stop me from helping other people.”

At about 2:30 p.m. on June 6, Adams was preparing to coach his nephew’s little league game when he was called out to a minor, two-vehicle accident at the 157-mile marker on I-45. As the senior fireman on-scene, Adams blocked off the lane with his truck and traffic cones, following protocol.

While preparing to wrap up the routine call, 27-year-old Jocelyn Ortega of Dallas, who was driving one of the cars involved in the minor crash, asked him for directions to give to her sister when coming to pick her up from the towing location.

An 18-wheeler failed to heed the department’s clear warnings to switch lanes and collided with the two parked vehicles, causing it to overturn onto Ortega’s vehicle and strike Adams and his fellow firefighter. Ortega did not survive. Centerville firefighter Clint Franklin was taken to the hospital by air ambulance and was released later the day.

“It threw us up over the cables onto the other side, almost to the opposite lanes of the interstate,” Adams said. “I remember looking down and, because of my medical experience, knew my foot was gone and there wouldn’t be any saving it. Half of my foot was basically ripped from my body.”

DPS Corporal Rusty Moore aptly ran over to Adams and put a tourniquet on his leg, saving his life.

Adams was then aired to Baylor Scott & White Medical Center in Temple. The remainder of his foot was removed in the initial surgery. The following day, he was informed that the surest way to ultimately regain normal function would be with a prosthetic after removing everything from the knee down. He stayed in the hospital for a week and either his father or brother was by his side every night.

Two weeks later, he needed to return for further surgeries due to an infection.

“Those surgeries about killed me,” Adams said. “They were worse than the initial removal of the leg. The mental side of things is what sucks, and it is all because people don’t move over and slow down.”

Adams has understandably had issues with his mental health since the incident despite learning to walk again through numerous trips to physical therapy.

“It was a challenge getting up every day and getting out of bed,” Adams said. “I had to build myself back brick-by-brick, and I am still building that wall to get back to 100 percent in doing what I do, and that’s serving the public. Prosthetic leg or not, I am still going to do what I do.”

There were no instances since the injury in which Adams pondered doing anything other than what he has always planned to do: graduate from SHSU in December while walking across the stage, continue his education as a paramedic and firefighter at Texas A&M Engineering Extension Service (TEEX) in College Station and ultimately join the Bryan Fire Department. 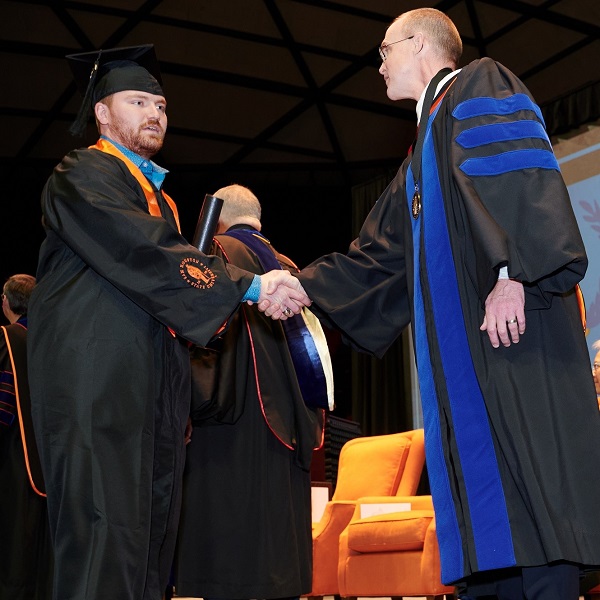 “A lot of people thought I was going to change my career when I got hurt,” Adams said. “Those people that don’t think I will have full capabilities as a fireman, they are going to find out. I feed off that doubt, it just makes my fire burn hotter.”

Even more people urged him to take a semester off from his studies at SHSU or even quit entirely. Apparently, they didn’t know who they were talking to.

“I started my summer class in the hospital,” said Adams, whose summer II statistics course began just after his second round of surgeries. “I knew I was going to graduate in December and walk across that stage. I will not be in a wheelchair or on crutches.”

While the majority of his classes during his final fall semester were online, Adams still had one in-person course. He never missed one session. The university and facilities management team were able to make accommodations for him to get around campus easier. His father, on top of being Centerville’s Assistant Fire Chief, is also SHSU’s Director of Facilities Campus Services.

On par with his life’s mission, Adams saw another way to serve his fellow man as a result of the injury.

“I had somebody come to the hospital and talk to me after the injury, he was military and battled PTSD,” Adams said. “He has an organization where he goes to hospitals and talks to people experiencing physical or mental trauma.”

Whether it is a first responder, military or law enforcement member, or even just somebody who lost a limb, Adams expressed a desire to also visit hospitals and share his story with those in their darkest hour.

“I can show them that I went through this too,” Adams said. “The mental side is the worst part. It is a fight all day and night long, and there will be some sleepless nights. I am going to help them get through that because I have been there and done that. I now have the capability of helping a wider range of people.”

Adams graduated with a degree in criminal justice. He minored in general business.

He was invited to testify in an effort to reform the Move Over or Slow Down law, which requires drivers to move over a lane or slow to 20 mph below the posted speed limit when approaching emergency vehicles, law enforcement, tow trucks, utility service vehicles, TxDOT vehicles or other highway construction or maintenance vehicles using visual signals or flashing lights activated on the roadside.

“Slow down and move over when you see first responders on the roadways,” Adams said. “We want to see tomorrow as much as you do.”