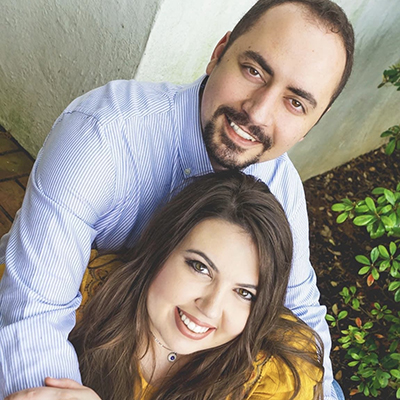 Sezer (’17) and Gabrielle (’16) met the first day Sezar moved to Huntsville in Aug. 2015. Sezer was an international student from Turkey, joining a new program at the university. The department wanted Sezer and the other students in this cohort to be housed together. Gabrielle was working at an apartment complex off campus, the only housing available at the time to accommodate the international student group. Gabrielle was the one who gave him his room assignment and keys and anytime Sezer needed help, he would always come to the office and ask for her. They quickly became best friends and started dating within a few months. They remember fondly spending their Friday night date nights going to dinner, usually at Farmhouse or Humphrey’s, and then a $5 dollar movie at Cinestar or bowling at Huntsville Lanes. The pair were married in Sept. 2019 in an intimate ceremony with close family and friends in Texas, and then a big, cultural wedding with Sezer’s family and friends in Turkey. Now, they live in Dallas, Texas, and Gabrielle is working as a Degree Plan Evaluator II in the advising office at University of Texas at Dallas. Sezer works as a Software Developer for various companies. Before the pandemic, you could still catch them at the movies or bowling on Friday date nights. Now, they are just adjusting to life’s new normal, and frequently reminiscing about their days at SHSU. When they have to drive to Houston, they are excited to see Huntsville again and always make sure to wave at the big Sam Houston statue from the interstate! 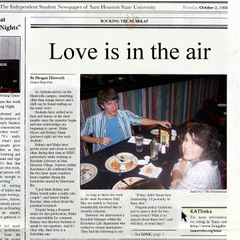 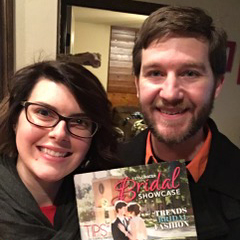 Brittany (’09, ’11) and Blake (’10) began their love story as resident advisors at Sam Houston Village. Though they shared mutual friends, were connected on Facebook, and had a few deep conversations about the literary series, “Twilight,” it took a natural disaster to bring them together. In September 2008, Hurricane Ike struck and the staff was confined to the hall for a week. From that time on, they became inseparable and Britney and Blake claim this is when they fell in love. During their time at SHSU, they enjoyed date nights at the Italian restaurant, Giovanni’s, (which is now City Hall Café, where they had their wedding reception) and watching the Walls unit bats. Since they were co-workers they had to hide their relationship and Blake would meet Britney in the stairwell and sing, “I want to hold your hand” into her ear as they passed. Britney says this is when she knew she wanted to spend the rest of her life with Blake. They married at Austin Hall in 2015 and their wedding was even featured in their local bridal magazine for Stillwater, OK.  SHSU has always been a big part of their relationship, and for their most recent anniversary, Blake’s gift to Britney was a copy of the Houstonian from the day they became a couple. Blake was a contributing reporter at the time and working towards his journalism degree. In this edition of the newspaper, he featured them in a story titled, “Love is in the air.”  Follow the link to view the photos from their campus wedding.

Jay (’87) and Melissa’s (’87) love grew out of a shared appreciation for music. Jay started at SHSU in 1982 as a Music Education major after hearing about SHSU’s remarkable reputation in the field. He knew it was the place to go if he wanted to be a band director. That next year, Melissa started at SHSU, and the pair found themselves in the Bearkat Marching Band together, Music Theory I, Music History I, and a few other courses. According to Jay, Melissa was a quiet freshman, and he was a bit of a know-it-all sophomore. Their first date was dinner at The Junction, (now called 1836 Steakhouse), though Jay says he does not remember what he ate that night because he got lost in the conversation, along with Melissa’s blue eyes. It did not take long for them to become great friends, and by the end of the semester, Jay realized she was the one. When the two weren’t in class, they spent a lot of time taking long walks up Bower’s Boulevard to Sycamore, to watch Bower’s Stadium being built, and talking about the future. They married at Second Baptist Church in 1987, before Melissa began her student teaching. The SHSU faculty brass quintet performed, and many of their fellow classmates came. Today, they enjoy coming back to town to see all the changes at SHSU and Huntsville. They now live in Montana, but when SHSU played Montana State in a NCAA Division IA playoff game, Melissa played with the SHSU pep band! 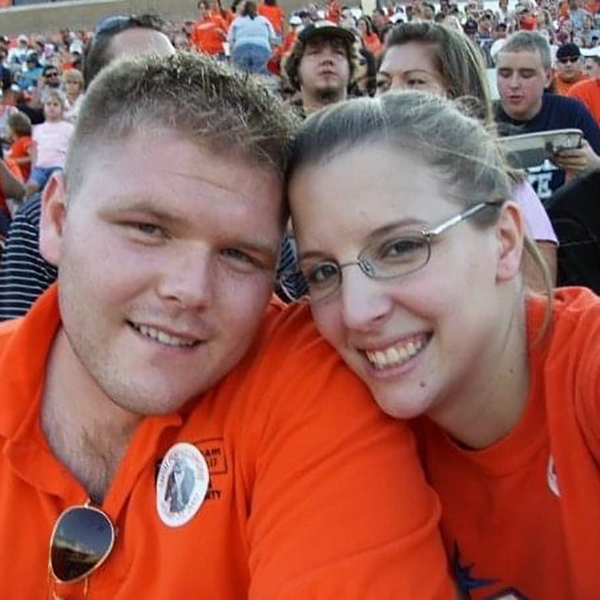 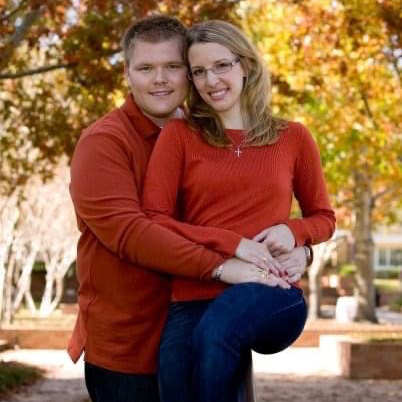 Justin (’08) and Laurie (’08) met in 2005 in Professor Gaines’ English class and were paired together as project partners. As they worked throughout the semester on various assignments, they found themselves growing very fond of each other. Justin soon asked Laurie on their first date to go see “Walk the Line” at the e movie theater. Their second date was to the Phi Delta Theta formal. While at Sam, the couple spent a lot of time going to Sam Houston football games, Phi Delta Theta events and Program Council events. They loved SHSU tailgates, the homecoming carnival, men’s basketball games and even rode in a hot air balloon on campus! Today, happily married for 10 years, they reside in Conroe, Texas, and have three, beautiful future Bearkats, Ryleigh, Jacob and James, as well as two four-legged babies, Luigi and Bella. They love SHSU so much their third baby announcement was Bearkat themed! They enjoy bringing the children back to walk around campus, attend sports events and grab a burger at Mr. Hamburger. SHSU holds a special place in their hearts and they hope it will one day be where their kids choose to attend. 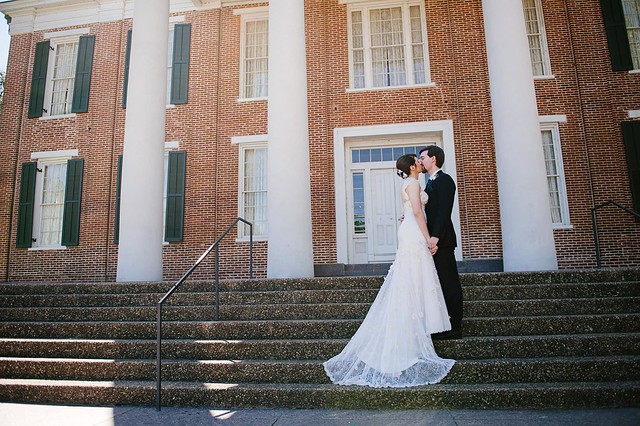