Art students at SHSU are having their time to shine through the 3D Printed Art Exhibition at the SHSU Satellite Gallery.

The artworks on display are from the past three semesters of the Advanced 3D Animation course. In this course, students engage with digital sculpting software, Zbrush and have their works printed using the 3D printers in the Dana G. Hoyt Fine Arts Building. The works fall into three categories: Cambrian, niche and hybrid.

Works in the Cambrian format use reference material from species that went extinct during the Cambrian period to create models of these species or something new modeled after them.

Niche pieces are of unique creatures that fill a role in the natural world that is often overlooked. Professor Johnathan Bryson explained this using the following comparison: “Where lions and cheetah cull the herds of Africa, maybe your creature culls the herds of pencil shavings under your desks or scavenges eggshells from the trash bins.”

The final category, hybrid, merges humans and animals to reflect mythical creatures like centaurs, werewolves or bigfoot. The only difference here is that the students were tasked with creating never-before-seen humanoid creatures.

The exhibition is free and is open to everyone who wishes to be amazed by the creative works of SHSU CAM students. For the safety of those visiting the gallery, visitors are required to wear masks and only four people will be allowed to roam the gallery at a time.

“I encourage students, faculty and the community to visit the Satellite Gallery this summer and int eh future,” Bryson said. “Our students create fantastic work and having this wonderful space to exhibit them in is important in our continued support of creating successful artists.”

Here are some descriptions of the works by the students who created them: 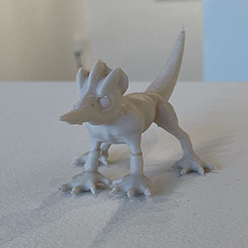 “He cleans up long hairs that gets stuck/woven into clothes. He is domesticated, and his long, narrow, hooked snout lets him pinch and/or hook the hairs to pull them out. They can climb really well with his large lizard-like feet, so even clothes hanging up in closets are easy for them to get to. They will use the hairs as part of their nest.” 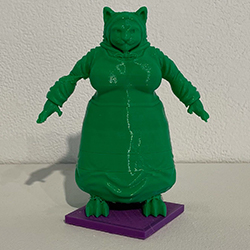 “I have decided to call this creature Babushkat. She lives in a small town in Russia. In this world, animals have dominated intelligence through evolution instead humans.  Babushkat is an elderly grandmother who spends her day cleaning and keeping a tidy living area while keeping a personal collection of dinnerware and dolls.  She cooks and bakes for her grandchildren and the neighborhood kids and is often described as a kind and loving individual from a strong and well trusted species.  She experiences all four seasons year long during their designated times and for a living, she runs a small family-owned inn to take care of weary travelers and tourists alike regardless of what species they may be from. Babuskat does not judge, Babuskat only loves.” 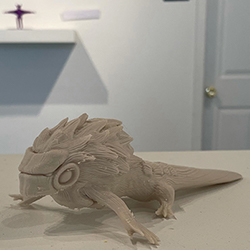 “The inspiration behind the animal characteristics of this model came between a squirrel and a salamander.  This creature is set to live in the Monte Desert in South America. It is a scavanger, its entire diet consists of the bones left over by vultures when they prey on the dead.  Its face is a hard armored husk that can crunch and crush small bones and knaw at larger bones. It has sensitive hearing, if it hears danger nearby, it digs underground for cover using its clawed fingers and its head to push away dirt to burrow entirely.  To Prevent itself from heat exhaustion, it has evolved to grow hair on most of its body, especially near the head.  It also has very thick and rough  skin on its torso so walking and scraping its body on the ground does not affect it, much like the heel of our toes have very thick skin to cushion every step we take. It also has the same overly thick skin  pattern on its back around the leg area so it can cushion its fall if it ever falls off of on its back while its climbing trees or rocks.  And since that part of its body faces the sky, It is also covered with hair.” 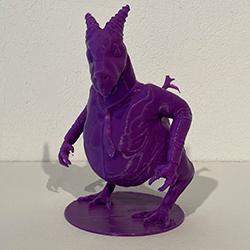 “My character, Jerry, is a sleezy pawn-shop business dragon who makes his money off of the dishonest trade of selling off jewelry and gold from other dragon’s lairs. His average-joe name fits his average appearance, accomplishing little else in life than digging his unkempt paws into wealth, hence the rings he’s probably stolen from his merchandise. My original idea was just that of a distasteful business dragon, but soon grew to the idea that he stole gold from other dragon’s liars. Then, during class, peers suggested he would work well as a pawn-shop worker, and it fit perfectly into his character. I feel this model is mostly successful. I feel that the clothes feel ill-fitted and unkempt and his body similarly fat and not well taken care of, adding to his character.” 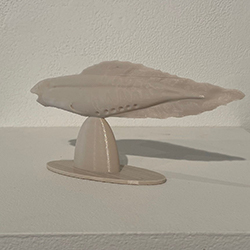 “Based on the Haikouichthys from the Cambrian period, I wen't ahead and changed the head into a more modern fish style head and added an extra sort of Gil flap into the side of the body. I kept the fin as close to the original as possible but made it look more like an eel’s fin.” 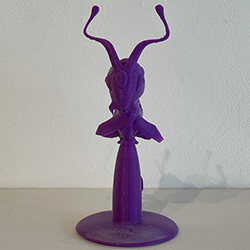 “My Cambrian creature was inspired by the Anomalocaris, Waptia, and a few other sea creatures; also some of my other inspirations is the seahorse. I gave my creature a shell-like back that stops at the base of the fintail to protect it from predators and the antennas allow it to sense anything coming by. The fintail was a little tricky for me, since I wasn’t sure how to incorporate it but my decision was based on a clam shell and I tried to morph it as much as possible. I feel like the tail will allow my creature to grasp certain things or food which is kind of neat. The mouth resembles a lot like an ant to help it capture and shred food apart.” 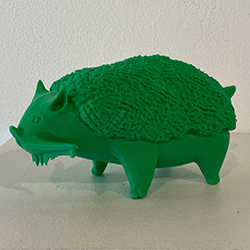 “Have you ever had a problem with hair being everywhere around your house whether it be your pet's or your own? Well then have I got the creature for you! My niche creature is called a Hairyhog. It gets its name from the fact that its main source of food is hair. It uses its comb-like mouth to pick up hair and then it gobbles it up. The Hairyhog's fangs may look scary but it is actually a rather shy and docile creature. They are nocturnal animals and prefer cool and dark environments.”