The Voice Of Students: A Chat With Student Body President Amanda Lee 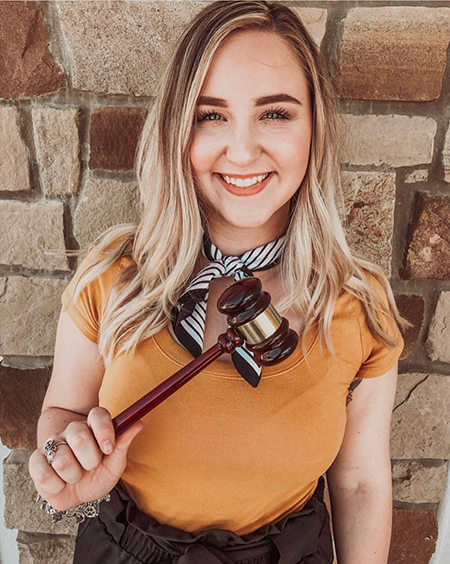 The Student Government Association is a group of fifteen students, democratically elected to serve as the official voice of the student body, administration, the Texas State University System Board of Regents and elected officials. The group consists of an executive, legislative and judicial branch, making up a model government that serves the student body by passing legislation and working with government officials to enhance the college experience for all SHSU students. The organization serves as a model government in order to give students experience with leadership and service.

In May, the SGA swore in the new Student Body President, Amanda Lee.

Lee is a junior, majoring in Communication Studies and minoring in Spanish and Community Leadership. She has been involved with the Student Government Association for three years and served as the Chief of Staff last year. Today@Sam reached out to Lee to learn more about her new leadership role.

AL: I was initially interested in student government because I participated in student council in high school, where I was able to make a difference on campus. I was intrigued by the thought of being able to do the same at Sam Houston.

T@S - How did you feel when you learned that you were the new SGA President?

AL: The three weeks of campaigning felt like a lifetime, but every minute was worth it. Seeing the results for the first time is the most exhilarating part. I was beyond ecstatic! At that moment, I knew that I had made my family and my friends proud.

T@S - What are some of the responsibilities you have as president?

AL: As president, I serve on many university committees representing the student body as a whole. I get the opportunity to serve as the Vice chair of the Student Advisory Board where the Student Body Presidents and Vice Presidents from our Texas State University System get to put together a report and present that to the Board of Regents who essentially govern the schools. I also get to participate in many fun activities like judging lip singing battles, introducing performers for SammyPalooza, and emceeing for events.

T@S - Are there any changes or new legislation that you will push for?

AL: Along with the many initiatives on our platform, I am excited to continue our works with Aramark to do a program called “Swipe out Hunger,” the planning stages have begun and is expected to make a debut soon. This has been a collaborative effort with Aramark, Bearkat Onecard Office and The Student Money Management Center. “Swipe out Hunger” will serve as a system where students who are food insecure are able to consult with a trained counselor to essentially add meal swipes to their account.

T@S - How does being a part of SGA prepare you for your future?

AL: Being a part of SGA is preparing me for my future by putting me in situations that can be challenging to deal with. This has also given me the opportunity to get to know staff and faculty that could help lead me to my future career.

T@S - How does legislation passed by the SGA impact students?

AL: Legislation passed by SGA impacts the students because it is a part of their voice. When we pass legislation, it is to represent them and what changes they want to see on campus. It affects all students and can essentially change many things on campus.

T@S - Are there any activities that the SGA has planned to get students involved?

T@S - What advice do you have for students wanting to join SGA?

AL: My advice for any student wanting to join SGA would be to go for it! We all have a voice that wants to be heard and make change on the campus. Participating in student government is such a powerful way to make an impact while you are at SHSU.

Students who want to join SGA need a 2.0 GPA in order to run for senator in the general election this spring or can enter at any time after completing the short council process and the current senate votes them in. To apply for a position on the SGA Senate, follow this link and bring it to one of their meetings on Tuesday's at 6:15 p.m.