While others took time to relax over the winter break, students from SHSU’s Center for Law, Engagement, and Politics (LEAP) participated in a leadership forum featuring General Stanley McChrystal, a four-star general (retired) who commanded the American and coalition forces in Afghanistan. At the event, a collaboration between the LEAP Center and the World Affairs Council of Greater Houston, McChrystal focused his remarks on the complexities of leadership.

McChrystal profiled famous leaders in diverse categories such as geniuses, founders, heroes, zealots, power brokers and reformers. Each student received a copy of McChrystal’s most recent book, “Leaders: Myth and Reality,” in which he analyzes the leadership qualities of 13 leaders.

Cadet Erick Rodas, one of the SHSU students who attended the event, is an active duty Sergeant First Class (SFC), who is attending the SHSU ROTC commissioning program. Since cadet Rodas’s service as a Corporal in Afghanistan, he has admired McChrystal’s humble approach to building teams and being a leader. Rodas has leveraged McChrystal’s model to develop stronger relationships with his soldiers.

“Now, as a senior leader, I look to General McChrystal for insight on what leadership would look like from the perspective of someone who has led the most elite service members our nation has to offer,” Rodas said.

In his talk, McChrystal dispelled various myths of leadership, explaining that leadership cannot be defined with a checklist of specific qualities. Instead, it is dependent on particular circumstances that can change over time or from place to place.

McChrystal shared the success stories of Walt Disney and Coco Chanel and how each of these leaders teach less about how to lead and more about why people follow, explaining that a leader’s vision is more important than the leader’s style. McChrystal also described the leadership style of Harriet Tubman, an American abolitionist and slave rescuer. Explaining that Tubman’s leadership is significant for the values and symbolism of her actions.

“I never thought about how a leader’s traits really only matter when they’re combined with other elements such as his or her vision or mission,” said Brittany Gibson, a freshman at SHSU.

During the event, McChrystal reminisced about a phone call on the day of his retirement from President George H.W. Bush, whom he had never met. President Bush chatted with McChrystal for several minutes and thanked him for his service to the country. McChrystal noted that Bush’s phone call reflected the former President’s emphasis on public service, a product of his values. 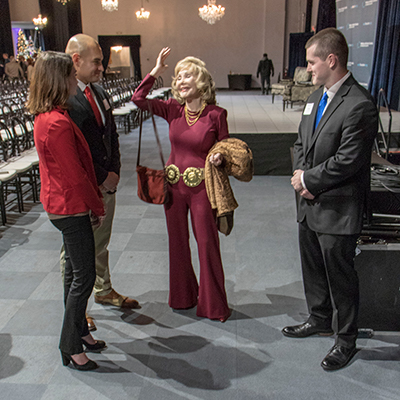 LEAP students were excited to meet another civic leader at the event: Joanne King Herring, a Houston author and former honorary consul to Pakistan. In the late 1970s and 1980s, Herring helped shape the United States’ support for Afghanistan to resist the Soviet invasion. Herring complimented the students on making the drive from Huntsville, encouraging them on their future endeavors, and sharing some behind-the-scenes anecdotes of her time in Afghanistan.

Dakota Burden, a sophomore at SHSU, says the messages on leadership from both McChrystal and Herring invigorated the LEAP students and they were grateful for the experience.

“Being a good leader is a journey,” Burden said. “And we’ve enjoyed our educational journey at SHSU.”