The Path To Excellence 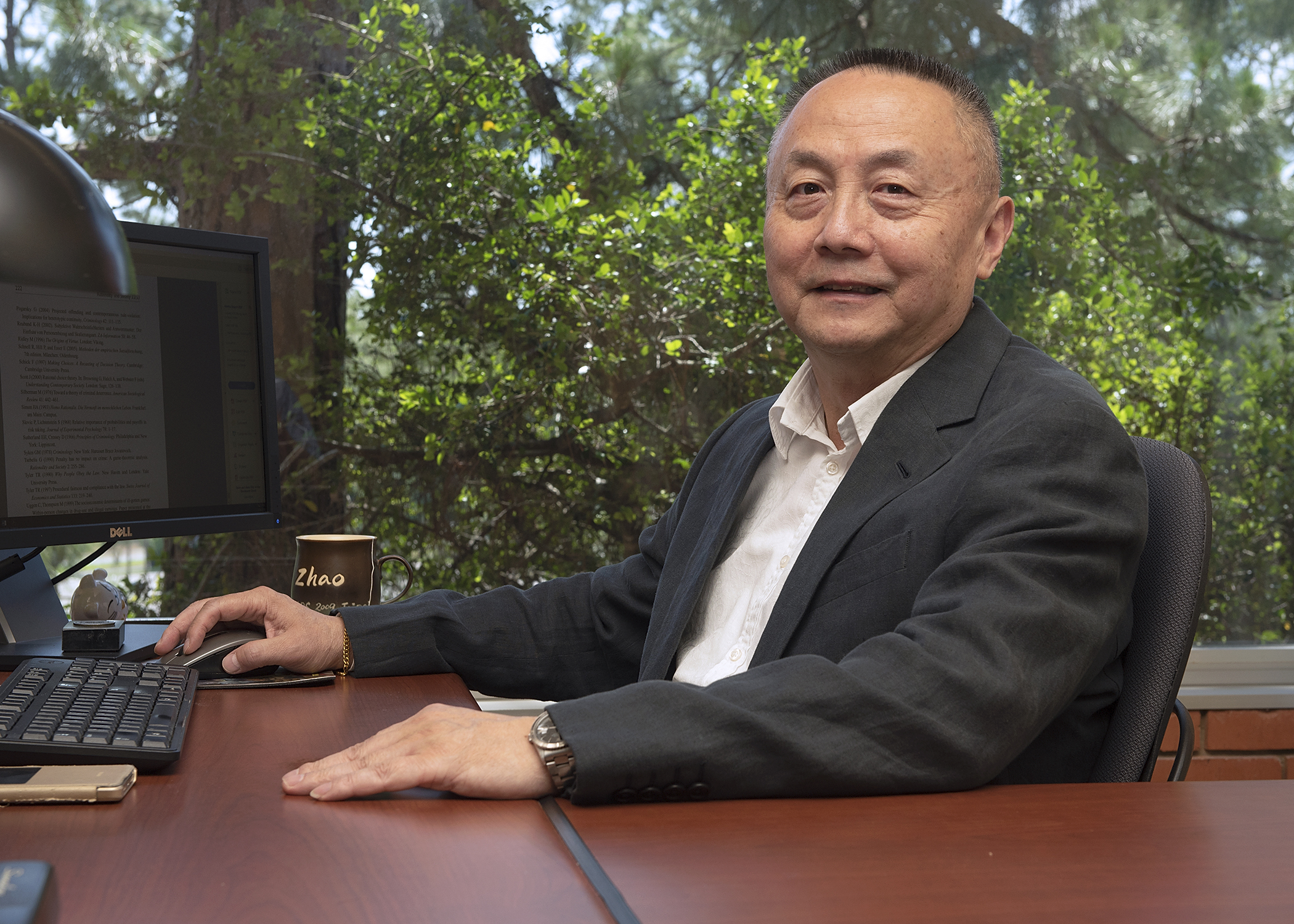 The College of Criminal Justice at Sam Houston State University has received attention and awards from around the globe, largely on behalf of the active faculty dedicated to research.

Solomon Zhao, professor of Criminal Justice, has been an essential part of the program that has earned top ranks globally.

Born in Shanghai, China, Zhao’s journey to academia began quite differently than most of the professionals in his field.

“I was born just before the Great Cultural Revolution in China. I went to grade school until fifth grade when the revolution started,” Zhao said. “For two years after, I stayed home with no school.”

The Cultural Revolution essentially put all forms of education and school on hold for ten years, leading Zhao to leave Shanghai for his middle school years to work on a farm outside of the city.

“When I turned 16, there was no high school. I went back to the farm company to work as a laborer for three years,” Zhao said. “After, I came back to Shanghai and worked as a gatekeeper at a factory for four years. When the Cultural Revolution came to an end, the entrance exam for colleges in the nation opened.”

At the age of 22, Zhao took the national exam and was permitted into college in Shanghai with a major in English. Because of the ten-year gap, a large accumulation of applicants had built up over time. With his hard work, Zhao was a part of the minuscule percentage of applicants that were permitted into the new cohorts.

After receiving his degree, Zhao began to teach English at a police college. From there, his interests were piqued in the field of policing and soon after Zhao became a Fullbright scholar and attended Washington State University where he received a master’s degree in Criminal Justice in 1990.

“After being in the academic field for so many years, I wanted to experience something outside of it,” Zhao said. “I went to the Ohio Department of Corrections, Bureau of Research for a year. After that period, I realized the academic life is where I fit best.”

Zhao went on to teach at the University of Nebraska – Omaha for 13 years, delving into his research and bringing in graduate students along the way. During that period he was given the opportunity of a lifetime when he was able to testify in front of the U.S. Senate and defend his research on the correlation between crime rates and putting more police in the field.

“International data can show us so much, and I realized that at the time. Criminal behavior among Chinese youth is only a fraction of what it is for American youth, and that’s largely due to the larger presence of police on the ground” Zhao said. “My study in community policing allowed me to go to the U.S. Senate to testify. A crime control act appropriated $9 billion to police stations across the country within six or seven years and I was studying the effectiveness of that. The question was, is the money going in to each city going to increase or reduce the level of crime? With more money added, more police presence will be available. My results concluded that crime rates were lowered in these cities.”

As the recipient of the 2018 Faculty Excellence Award in Scholarly and Creative Accomplishments, Zhao knows just how important research is as a key part of academia. He has established himself globally as an expert with three published books, 83 peer-reviewed research articles and securing nearly $1 million in external research funding.

Working in research can be time and money consuming, according to Zhao, but is a necessary part of every field.

“With research, sometimes the outcome is completely different than what you expect,” Zhao said. “In policing, about 30 percent of my findings have concluded in ‘no findings,’ and that’s the reality for a lot of research being done. You are also liable for your own research and must have sufficient evidence to back your arguments.”

Zhao sees his work in research as an important factor in his growth as an educator.

“I believe research has offered a broader view of how I perceive the world,” Zhao said. “You can understand how to draw conclusions based on facts, instead of your personal beliefs. Research can have flaws, but if you are trained, you can make better judgements.”

Many of Zhao’s nominators on his recent award cited his dedication to mentoring students and the countless hours he works to ensure that they are well guided.

“I think the most important aspect in mentoring is to give students room and let them decide what they want to do instead of pushing them. Their own actualizations will motivate them to accomplish their goals,” Zhao said. “Secondly, it’s important to facilitate the learning experience, and do what you can as an educator to guide their research and passions into something bigger. Students will do it if they believe it’s important and making a difference.”

For the future, Zhao plans to stay dedicated to research to ensure the field of policing always has accurate and new information to center around.

“Urban police tactical villages will be opening in the Houston area and I would love to be able to get involved in something like that,” he said. “I’d also like to compare data between the use of deadly force in the United States and East Asian countries. To compare things like crime rate, education in regards to policing and other factors that might make deadly force an option can give us a lot of answers going forward.”

Zhao was honored to receive the 2018 Faculty Excellence Award and is even happier to be a part of a university like SHSU.

“SHSU is a fantastic university, and the College of Criminal Justice is rooted here,” Zhao said. “It was an honor to receive the award. It’s a very distinguished achievement and I’m very proud and thankful for the university and the college.”