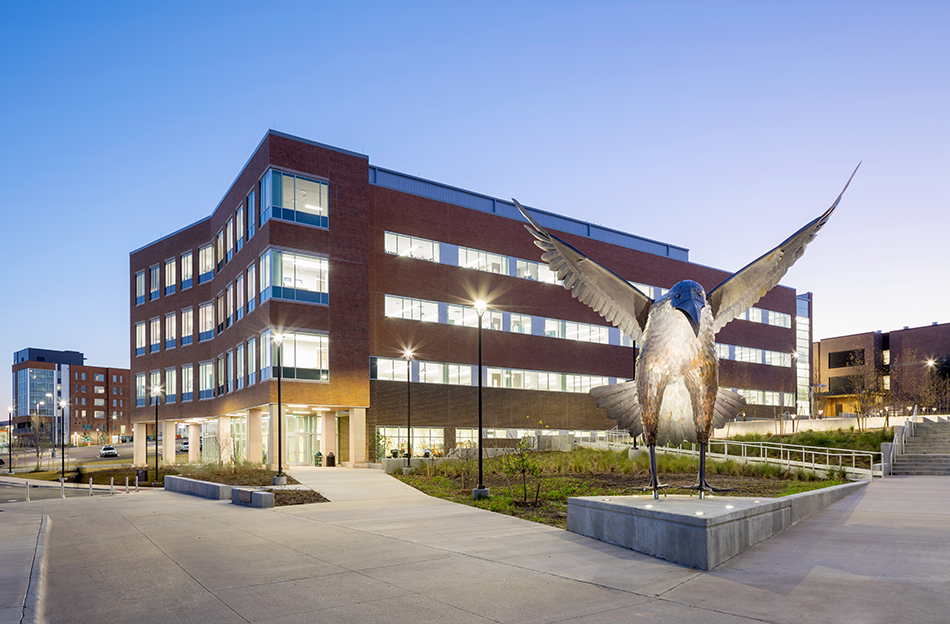 The story of how Sam Houston earned the nickname “the raven” has been told countless times around Huntsville. However, for the first time that nickname will come to life on campus. A raven sculpture that is over 21 feet tall and weighs more than 7,000 pounds makes its debut in Huntsville this week as a tribute to Sam Houston’s nickname given to him by the Cherokee Indians. The piece is being installed in the new plaza next to the Life Sciences Building. 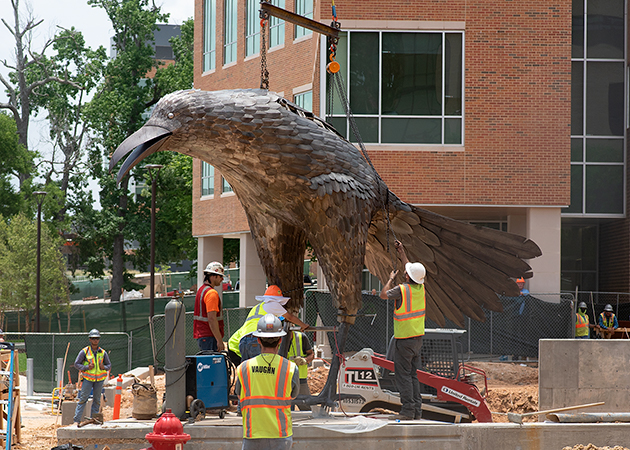 The raven was shipped in pieces and the install will take 4 days total, beginning with the body, followed by the two wings and finally a patina finish. Artist Ed Wilson was commissioned for the piece back in 2016, and he and his team of four have been working to complete the bird for a full year. Wilson said it was easy to find a subject to craft for campus.

“I think Sam Houston is one of the most interesting men in American history who did so much for this state and this country,” said Wilson. “It really stood out to me that he had the connection to the Cherokee and I wanted to bring that to life.” 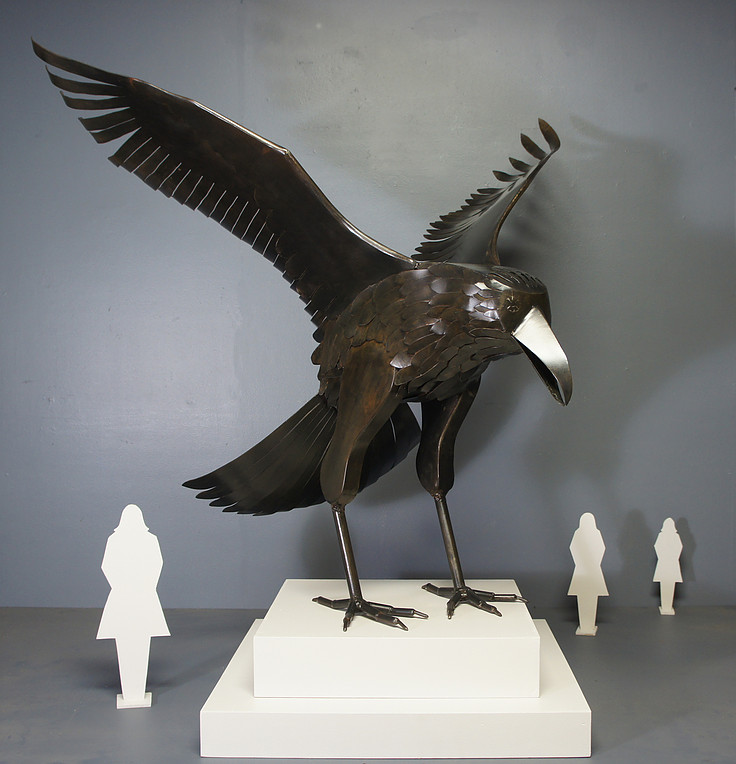 There are plenty of nods to the raven in and around Huntsville, and there have even been attempts to bring different raven pieces to campus in the past. But none stood as tall in the minds of administrators as the newest campus art.

“We have had other ravens submitted in the past, but this one took our breath away,” said Marie Hoke, consulting architect for Sam Houston State University.

Team Hoke Architecture and Consulting chose Wilson over other artists because it was clear that Wilson was passionate about bringing this piece to life.

“Others had been giving big presentations and slides, but Ed walked in and just sets a big raven model on the table and blew us away,” said Hoke. “We didn’t really ask for that level of detail for the presentations, but he was so excited about it that it really pushed us to go ahead and chose him for the project.” 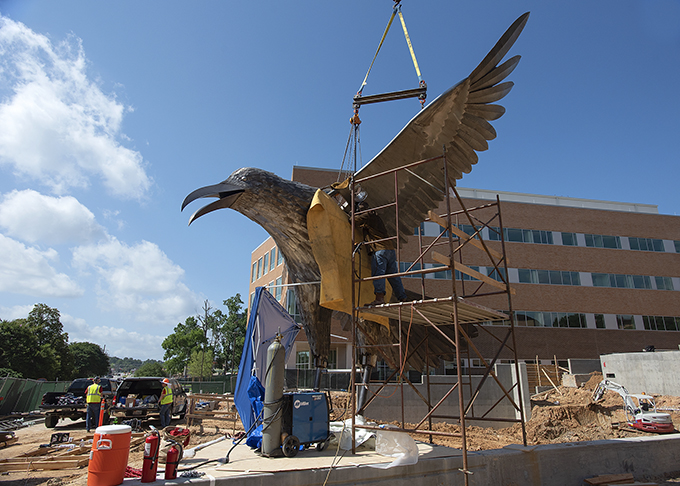 Wilson has previously taken on a number of public art pieces, with his most recent being on display at the George R. Brown convention center in Houston. Wilson has been an artist since 1973 and says that to him it doesn’t matter where his works are displayed, as long as they bring quality to a community.

“Whether it is a small town like Huntsville, or a big city like Houston, all art is about bringing quality of life,” said Wilson. “Whether it is visual art, the opera, the symphony or rock and roll concerts it is all important. I think that if you don’t have anything beautiful to see, anything that challenges your mind, then the world just becomes a dull place full of strip malls and boring things.”

Wilson is also excited to be able to have his piece displayed at SHSU, where so many minds are shaped and changed on a daily basis.

“I think that campuses are especially important and need art,” said Wilson. “I think it inspires creativity in students whenever they see the art. I think that is important for any field you are in: science, math, humanities, English, all students need a bit of creativity in their lives.”

The Story Behind "The Raven"

In 1809, at the age of sixteen, Sam Houston ran away from his home in Tennessee and lived among the Cherokees. He was adopted by Chief Oolooteka and given the name Colonneh or the "Raven." He developed a deep life-long affection for the tribe and considered the Cherokee his surrogate family.

Returning to the “white world,” Houston became a successful military officer and protégé of Andrew Jackson. He served in Congress and, in 1827, was elected governor of Tennessee.

In 1829, his first marriage collapsed. Devastated, Houston resigned from his office and went to live once again with his adopted family. He married a Cherokee woman, Tlahina or Diana Rogers Gentry, became a Cherokee citizen, and was actively involved in peacekeeping, trade, and other tribal affairs.

After spending three years recovering from his failed first marriage, Houston left for Texas. Though he never lived with the Cherokee again, he spent much of his career promoting peaceful and moderate policies toward Native Americans.