The purpose of the Regents’ Awards is to honor one exceptional instructor and one outstanding employee from the entire system. Jasper and Woodward each will receive a framed Board of Regents resolution, a commemorative medallion bearing the seal of the system and a $3,000 award. The pair were formally recognized at the annual SHSU faculty and staff meeting and will be honored at an upcoming Board of Regents meeting.

Jasper began his career in teaching after retiring from the United States Air Force as a Lieutenant Colonel in 1989. He then served for seven years as a junior high mathematics teacher while working on his doctorate at Texas A&M University.

He began his career at Sam Houston State in 2000 and soon after was consistently nominated for awards recognizing his teaching style. It comes as no surprise that he became the first professor at SHSU to receive this prestigious Regents’ Award. In 2006, Jasper was selected as a SHSU Excellence in Teaching Award winner, after having been a finalist in both 2004 and 2005. However, Jasper sees this award as more of a collective effort by the entire university.

“I do not see it as a personal award, but it is an honor to represent SHSU system wide,” Jasper said. “It makes me proud for everyone here.”

His passion remains a reflection of his early career, as Jasper enjoys helping middle school math and science teachers. Not only is this reflected in his teaching style, but Jasper also teaches a three-hour review session up to five times a year to help prepare his students for the rigorous teacher certification test.  SHSU President Dana Hoyt says it was these extra efforts that led to Jasper being the obvious choice for the honor.

“By thoroughly preparing future teachers, he ensures that they are ready for the innovative classrooms of today,” Hoyt said. “The long-standing impact of his exceptional teaching skills will spread across the state through his students for generations to come.”

Fostering a collaborative effort, Jasper’s classrooms are often found with students sitting in pod arrangements rather than rows.

“If you are just presenting information to students and leaving it as their responsibility to fully understand, that is not the best way to teach,” Jasper said. “We want to make sure our students understand the material completely because eventually they will turn around and teach that to students of their own. This is my passion. I definitely chose the correct career.”

His students are very appreciative of his efforts and teaching style and his classes are some of the first to fill up. His fellow colleagues who were part of the nominating process also realize the impact he has exhibited.

“For 11 years I held the office across the hall from Bill,” said nominator Melinda Miller Holt, chair of the Mathematics and Statistics department. “I witnessed the many students that came to him for assistance in the class and then later came back to thank him in person for his impact of their profession.” 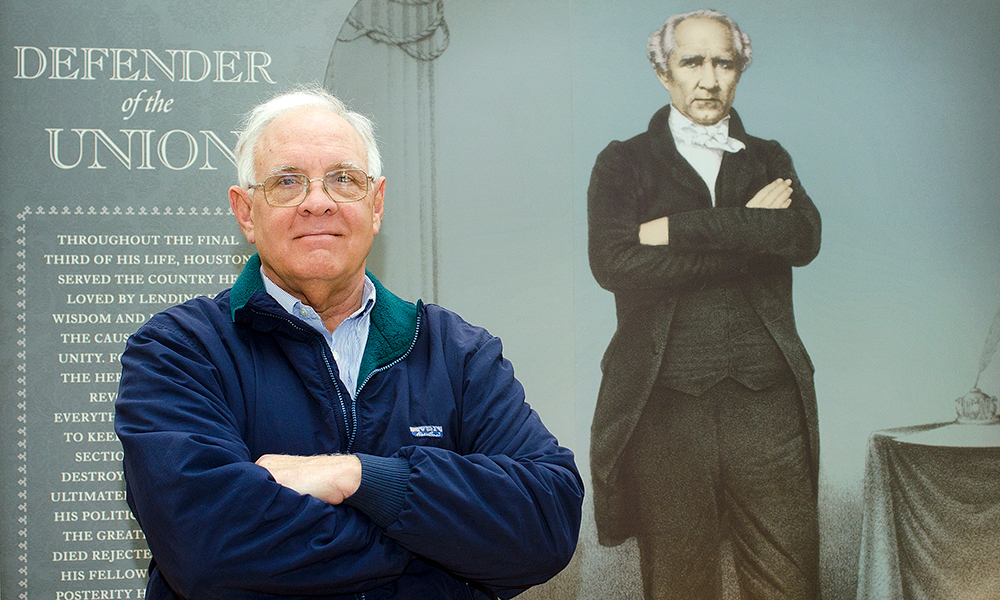 Woodward has been an employee at the Sam Houston Memorial Museum for more than 24 years, serving as the director since 2012. His knowledge of the university’s namesake is practically unmatched. Woodward has spent the majority of his career dedicated to promoting the life of one man, Sam Houston. Woodward says he is humbled to have his accomplishments recognized by receiving this award, but that it is all thanks to his role model from the history books.

“I am thrilled and honored to be nominated,” Woodward said. “If people see excellence or dedication in me it is because I have had Sam Houston as an example to live by for years. He is someone to pattern and appreciate. I give a lot of credit to what I have done to the fact that I learn from him daily.”

SHSU Vice President for University Advancement, Frank Holmes, says the change at the museum has been noticeable since Woodward took a leadership role.

“Our museum’s visibility and outreach have increased each year,” Holmes said. “Mac leads an outstanding team of professionals who have enhanced connections with the community and designed creative programs while working to integrate the museum more fully with the university.”

Hoyt says the dedication to the University motto, “The measure of a Life is its Service,” is perfectly personified in Woodward’s efforts for the museum.

“He exemplifies the attributes of a dedicated employee that continually strives to improve the museum,” Hoyt said. “His knowledge of Sam Houston and willingness to serve leads to him going above and beyond what is necessary to deliver a quality service for others. The Sam Houston Museum continues to expand, grow and remain relevant in a time when history is often overlooked.”

Woodward currently serves on The Board of Trustees for First United Methodist Church of Huntsville as well as First National Bank of Huntsville. He is also a member of The Board of Directors for Huntsville Memorial Hospital, Rita B. Huff Adoption Center and the Methodist Retirement Community.