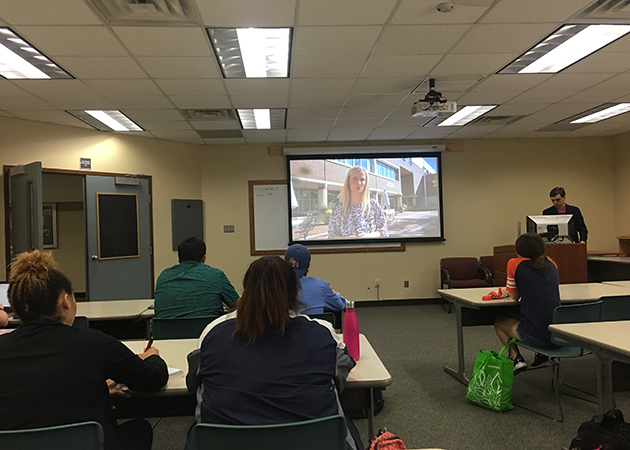 When viewing the major news networks, one can see that while the comments vary from channel to channel, the subject often remains the same: What President Donald Trump said, did, or tweeted that week.

Administrative actions typically lead the news. Political commentators from major networks voice their opinions on the matter, speculation from both sides is offered like a handshake and everything operates under the supervision of corporate sponsors.

This modern-day news culture is what 20-year-old Martin Rather, grandson of notable Sam Houston State University alumnus Dan Rather, set out to change with the help of SHSU faculty and students. The collective effort has resulted in an innovative news approach with an online show driven by student content.

Martin dubbed the show, “The Underreported,” as a testament to the stories he wants to highlight. Unlike traditional hour-long news programs, the show is eight-10 minutes in length and will air every Tuesday evening on social media via Facebook.

The aspect that truly sets the show apart, though, is the tagline “Trump Free News."

According to Martin, this catch phrase is not a political statement, but instead a description of the content that will air on The Underreported.

“Regardless of what you think of Donald Trump, we can all agree that there’s a lot of attention on him,” Martin said. “Let’s talk about the stories that aren’t getting enough attention so we can all learn something. That’s really what the show is about – it’s not about being pro-Trump or anti-Trump, it’s not even about him. It’s about finding the stories that matter for the future and matter now.”

Stories such as: how many people will lose healthcare because of the passage of one bill over another... something Martin and his grandfather experienced up close and personal while road-tripping across the Midwest this summer.

“That trip was seminal to the hopeful success of the Underreported,” Martin said. “It exposed us to a whole bunch of media outlets that we had never seen before. We picked up the Kansas City Star and the Rapid City Journal and all these different newspapers along the way, and the coverage was not much about Trump, but really about the healthcare bill itself and how it was going to affect people.”

When he returned to Houston, where he studies history at Rice University, Martin knew he had the opportunity to highlight stories that have low media attention but high national relevancy. To bring the show to life, he turned to his grandfather’s alma mater.

“Sam Houston has a fantastic mass communication facility and a program that’s well regarded nationally, so it was just a natural fit,” Martin said.

SHSU students fill a variety of roles - producers, grant researchers, social media managers, and more are members of “The Underreported” team. Once a week, the students make editorial decisions as a group, ensuring each persons’ opinion is heard.

While SHSU serves as home base for the show, its presence extends across the United States.

“I’m incredibly proud of the fact that our correspondents are not only geographically diverse, they are ethnically diverse, and they are diverse in terms of the academic institutions they attend,” Martin said.

Junior SHSU mass communication major Madison Smith is one of the students who is bringing their voice and skill to the screen as a segment and studio producer, as well as an on-air correspondent.

“To be involved in a project like this means so much to me because its news that people want to know, but they just can’t find,” Smith said. “It’s up to us to find it and get it out there. I love being a segment producer and a studio producer because you get to find stories that mean so much to the public.”

Only the top three to four segments, voted on by the editorial team, will air each week to ensure a standard of quality for The Underreported. Together, the team critiques segment quality, content of the story and correspondent performance.

In fact, almost every decision made on the show is voted on by the editorial team, because in addition to “Trump Free News,” Martin stresses a second phrase – “We.”

“What’s great about this project is that the ‘we’ has expanded significantly as time has gone along,” Martin said. “I never could have imagined when I first started talking about this that I would come to a meeting with 30 people in the room. Or that we would have correspondents from across the country. The ‘we’ started out as a small group, and now it’s something that really has momentum and the power to make a difference.”

Throughout the show’s production, Martin reels advice from SHSU professors, peers and most significantly- his grandfather.

“We have a very close relationship,” Martin said. “He’s been great in terms of when I have something that I’m unsure about; I can bounce it off of him. He is not micromanaging this. It’s a project that I’m lucky he trusts me on, and I think he’s kind of watching from afar and supporting as much as he can.”

The Underreported will air every Tuesday evening at 7 p.m. EST (6 p.m. CST) on Martin Rather’s public Facebook page. Martin encourages viewers to ask questions, leave comments and suggest story ideas under the video or in a private message.

In addition, part of the editorial team will host a live question-and-answer video every Thursday at 7:45 p.m. to address viewer’s questions about the production process or show in general.

“Journalism is about speaking truth to power and it’s about finding and telling the stories that people don’t want to be told,” Martin said. “That’s part of what we’re trying to do with the show - highlight those pieces that are out there, but not currently reaching the audience that they should be.”