As a veteran detective in the Houston Police Department Homicide Division, Darcus Shorten investigated many of the city’s murder cases, including the Acres Homes serial rapist and killer.

Shorten, who joined the Homicide Division in 1995, was one of the detectives assigned to a FBI task force investigating the deaths of women in a poor, African American neighborhood in Houston from 2006-2009. She began to notice a pattern of sexual assaults involving prostitutes and others. After 50-year old Pamela Goss was found dead behind Pine Grove Church, she discovered even more cases describing a knife-wielding man who frequently assaulted women in desolate areas. 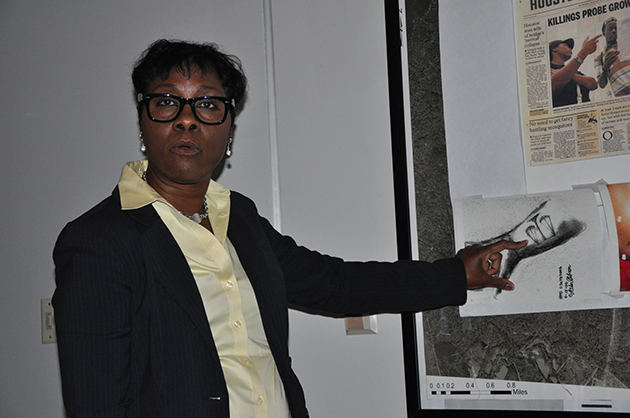 Fear gripped the community as several bodies were discovered along roadsides, in ditches and in vacant lots, and reports of sexual assaults escalated. The intensive investigation led to the arrest of Lamarques McWilliams, a married father of two who worked in a Mexican restaurant. McWilliams was tied to the deaths of five women and to five sexual assaults and is currently serving life behind bars.

Also nabbed during the investigation was Bilford Dwight Junious, a serial rapist accused of nine assaults in Acres Homes over a seven-year period. Shorten was featured in a Texas Monthly article detailing the investigation, and she received the “Meritorious Service Award” and an FBI award for her work on the case.

Shorten will discuss her career in the Houston Police Department at Real Talk w/CJ, a series designed to bring professionals in the field to the college to educate students about different career options available in criminal justice and to provide tips on how to get a job.

The presentation will be on Oct. 17 from 2-3 p.m. in the Hazel B. Kerper Courtroom at Sam Houston State University.

After taking classes in nursing and mass communication at Prairie View A&M University, Shorten joined the Houston Police Department in 1984, where she was assigned to the Central Patrol Division covering Downtown and Midtown Houston. In 1986, she was transferred to the Traffic and Accident Division, where she investigated vehicle fatalities and accidents involving police vehicles. She also served in the Juvenile Division, handling cases involving juvenile suspects and later the physical and sexual abuse of children. In 1989, Short did a short stint as a vice officer, conducting undercover operations in the area of solicitation of prostitutes.

Shorten joined the Homicide Division, serving as an investigator with the Family Violence Unit and working family-related, criminal case. She also worked on the Murder Squad, where she investigated homicides, child death and kidnapping cases.

Shorten is currently assigned to the Cold Case Unit, which investigates thousands of unsolved murders in the Houston region. She earned a place on the squad based on her ability to review and analyze cases for a positive disposition. She presents at Homicide Conferences, teaching the characteristics and evolution of a rapist to a serial killer and providing case studies that offer insight into the mindset of a serial killer.