The impact a person can make on our lives can transform us. As time passes we realize those changes and become overwhelmed with gratitude and understanding of those individuals who have left positive influences on us.

For the students involved in the Sam Houston State University’s Orange Keys, they developed the idea of hosting an award ceremony, called Keys of Excellence, to honor those who have supported and encouraged them in life.

“What the students wanted to do was be able to nominate faculty and staff who have really helped them along their journey here at SHSU,” said Chelsea Smith, the Associate Dean of Students.

The Orange Keys are an elite student ambassador group for the entire university. They serve as hosts for university functions such as banquets, luncheons, meetings, speakers, visitation days and career fairs. The members of the Orange Keys are constantly working with faculty and staff, doing all that they can to make SHSU a better community.

“The Orange Keys felt that it was important to recognize the ones who they work with every day and show them the difference that they are making in the lives of Bearkats,” Smith said.

According to Smith, the process of deciding who receives the award is fairly simple. The members of Orange Keys each nominate someone they feel deserves the award. There are 18 nominees and out of those, six of them are chosen by the fellow Orange Keys.

Each Orange Key must write a letter about their nominee. After the nomination letter is given to the organization, they send out applications to the people who were nominated. These applications are for the nominees to explain what contributions they have made to SHSU and how it has impacted the community.

“There are different categories and items that the nominees have to qualify for in order to receive a higher-ranking score than the other nominees," Smith said. "Some of categories include service and work, involvement and mentorship, and community outreach.”

Hurst, a division director for the Correctional Management Institute of Texas (CMIT), was nominated for the award by Bailey-Anne Kaytar, a current Orange Key and graduate assistant for CMIT.

“She goes out of her way to make sure that everyone, including the other students in our department, are being heard and valued,” Kaytar said.

Hurst is very humbled by and grateful for the award.

“I have had the joy of working with many students and watched them grow into professional, successful adults,” Hurst said. 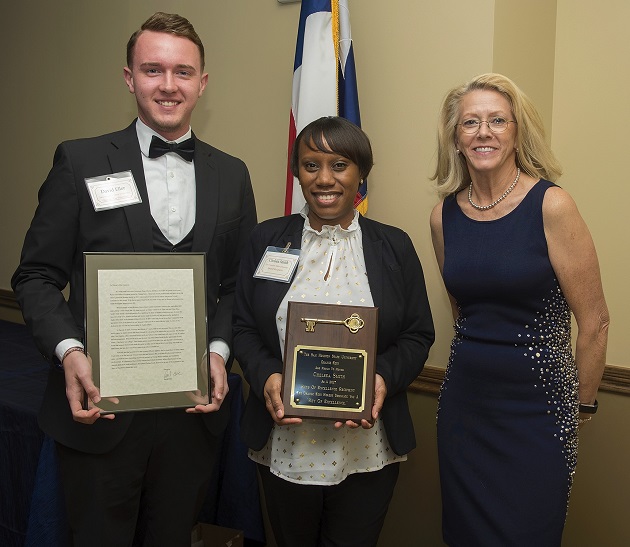 Smith was nominated by David Eller, a current Orange Key. According to Eller, one of the reasons he nominated Smith was because she was one of the only people who asked if she could give him a hug when his best friend died earlier this year. Therefore, he felt comforted by the support that Smith gave him.

“When I found out that I was nominated for the award I felt like what I do here as a professional means something to people,” Smith said. “It made me feel special and appreciated.”

The Orange Keys’ ultimate purpose for the award ceremony was to give back to those who have made a difference in their lives and to give them recognition.

“The award is about what the person has done, who won the award, to impact the members of the Orange Keys,” Smith said.