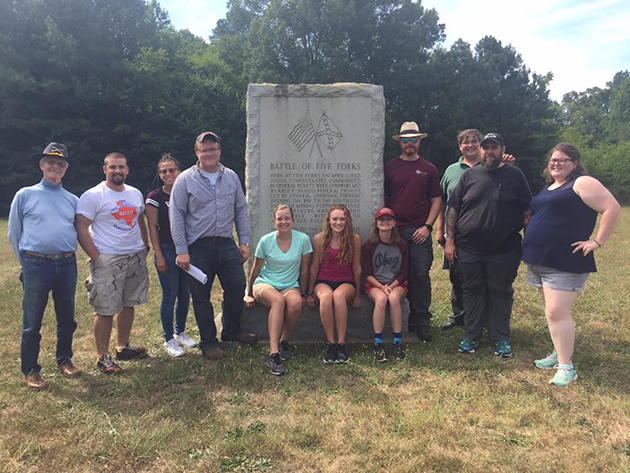 The Civil War is arguably the most prominent war in United States’ history, claiming the lives of more than 750,000 soldiers and ultimately resulting in the additions of the 13th, 14th and 15th amendments to the Constitution.

Over the course of 18 days in July, Sam Houston State University’s Brian Jordan, assistant professor of history, Jeremiah Dancy, director of graduate studies and assistant professor, and 10 undergraduate students traveled through the eastern theater of the Civil War to relive many major moments of the four-year bloodshed.

The group first traveled to Montgomery, Alabama and then headed to Charleston, South Carolina to visit Fort Sumter where the first shots of the war were fired in April 1861. 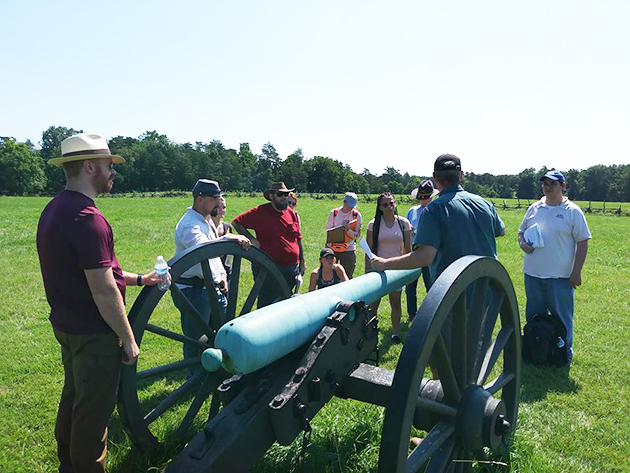 To continue their historic journey, the group traveled to Virginia, Maryland and Pennsylvania and followed all the major eastern campaigns in chronological order, which included Manassas, Antietam, Fredericksburg, Chancellorsville, Gettysburg, Cold Harbor, Petersburg, the Appomattox Court House, and Ford’s Theatre in Washington D.C. On their way back to Texas, they also stopped at Andrew Johnson’s home and discussed reconstruction. Jordan led most of the tours.

The first of its kind at SHSU, the trip stemmed from the idea of getting students out of the classroom to truly experience the Civil War in person.

“We’ve noticed a number of the Sam students have said things like, ‘I’ve never left Texas before,’” Jordan said. “It’s an opportunity, first and foremost, to gain experiences beyond Texas in other cultures in different places.

“With the Civil War in particular, it’s one thing to have a lecture course, but it’s another thing to actually walk in trenches in Petersburg or to talk about Gettysburg when you’re standing on Cemetery Hill,” he said. “There’s an added element of space and place that really aids one in understanding military history."

Kourtney Johnson, junior history major, signed up for the trip when she saw a flyer in one of her classes and knew she couldn’t pass up the opportunity.

“It was just a chance for me to be able to learn about the Civil War in a different way, instead of just sitting in a classroom and taking notes over it,” Johnson said. “I just really loved being able to actually walk the footsteps of the soldiers and see where all the battles took place. It made the Civil War even more special to learn about. It really helps you better understand where everything was happening, rather than just sitting in class and looking at pictures on a PowerPoint.” 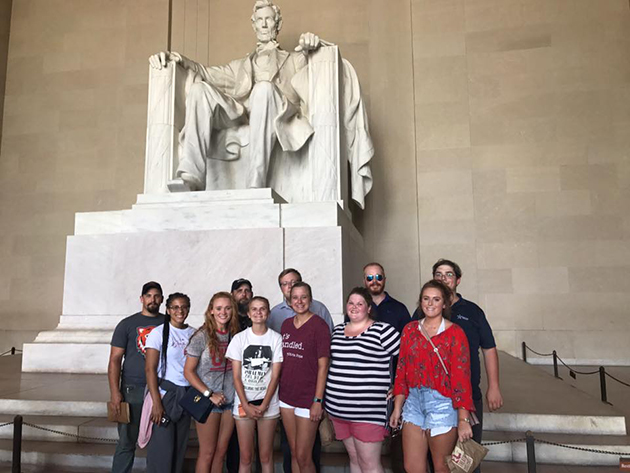 William Bailey, senior history major and German minor, considers himself a “history buff,” and his fondness of Jordan and Dancy influenced his decision to enlist in the program.

“History informs so much of the present in ways that we’re still now figuring out, whether it’s from our language, beliefs or the way we treat each other,” Bailey said. “It all has a tie, not only in our own development as a culture in the here and now, but in past developments, as well. There’s a quote from a book I read once and the historian said, ‘I am a historian. One might think that means I like old stuff, but no, I like life.’ History is the study of life through the lens of past generations.”

The Civil War interested Dancy because he himself is a veteran.

“I’m really interested in veterans,” Dancy said. “What these men do when they come back and how the public perceives the war is really important and is what draws me, especially with the Civil War, because it happened at home and then these people come home to places that are just down the road from major campaign areas. It’s interesting looking at veterans through time and how we perceive those wars, especially today.”

The overall impact of the war on America piqued Jordan’s interest.

“The numbers are still numbers that I think we can’t comprehend. It’s also important to remember that we think it’s very long ago, but it was only 150 years ago.

“I still know someone personally who lives in my hometown of Akron who knew, intimately, Civil War veterans, so it’s not terribly long ago,” he said. “It’s a scar on our own land, in our own backyard. I think it’s important for us to never forget what we’re capable of and what we were capable of doing to our own countrymen.” 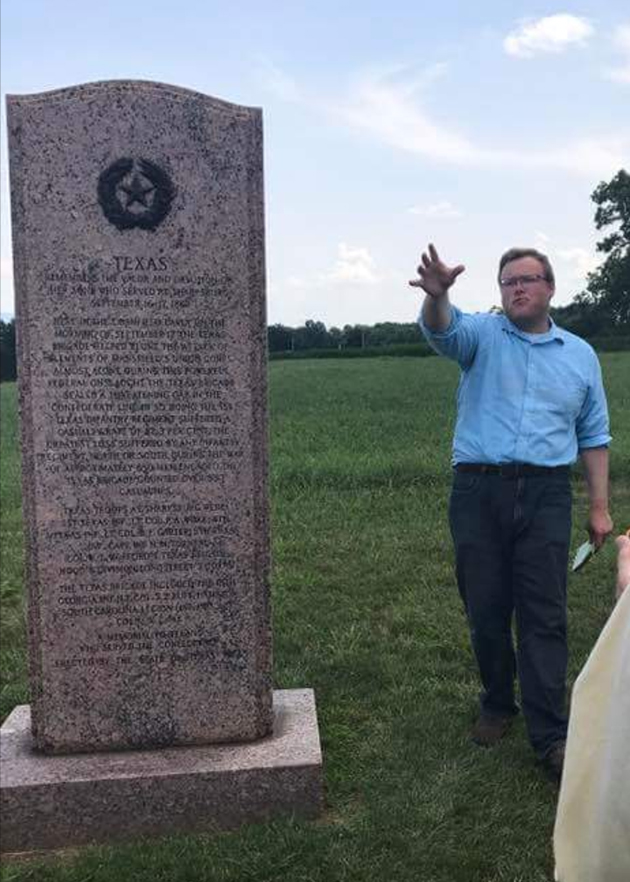 Each student was assigned an individual soldier to follow and had to report on their experiences through letters, diaries and memoirs.

“They very quickly took to those soldiers and cultivated a genuine sense of reverence on the battlefields. They really were emotionally invested,” Jordan said. “We got to the Spotsylvania Courthouse Battlefield, which was the site of the longest, uninterrupted fighting of the war, which was 22-and-a-half hours of hand-to-hand battle.”

“We read the accounts and I talked about what happened there and the entire class was in tears and emotional,” he said. “It was a special group and we can’t wait to do it again. The trip was fantastic. It was better than I even anticipated.”

Dancy was excited to show the students Gettysburg, especially because he hadn’t seen it himself.

“The class I’m teaching is Military in America,” he said. “We watched about a dozen films about the Civil War and talked about how Hollywood changes our concept of war in general. We explored the gap between the realities of war and the romance of the silver screen.

One moment that stood out to Jordan was when the group visited the Sunken Road at the Antietam Battlefield, which was when he noticed many of the students beginning to connect with the soldiers they were assigned.

Johnson said the most memorable part of the trip was when they visited Spotsylvania.

“Standing there listening to those accounts of the soldiers lets you visualize and feel what the soldiers were experiencing and what was happening during the battle,” she said. “That was a really amazing part about it, but the part that I really liked was after we were done listening, we went out and looked at the Bloody Angles. 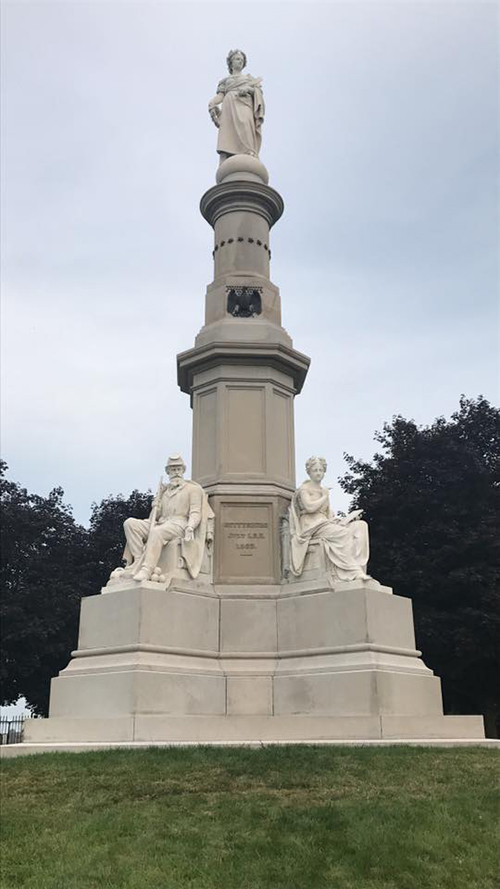 “While we were looking out, it started pouring down rain on us and this moment was so special, because the last account we read described how the rain was pouring down at that time, so the rain made the moment so surreal. It literally brought tears to everyone’s eyes. Words will never be enough to describe what we were feeling at that moment.”

After the group toured the battle sites of Bull Run, they went through took them through the nearby woods to see where the early soldiers were once buried.

“When the battle was over, men would go into the woods and bury all of the dead,” Johnson said. “A couple of years later when the National Cemetery was built, these men were dug back up so the bodies could be buried in a cemetery. When they dug them up, they didn’t fill the holes back in, allowing us to see the impressions.

“It was a really impactful part of the trip because it made us realize all these soldiers at the beginning of the war didn’t have cemeteries to be buried in and, basically, their best burial spot was in the woods—that’s pretty much the best they got,” she said.

Bailey said seeing the burial sites for the soldiers was one of the most impactful parts of the trip.

“We know the war was one of the bloodiest human conflicts in American history, but just hearing about it, seeing these graves and knowing these people’s mothers, fathers, wives, children, might have never known where they were buried was emotional,” he said. “I think that’s one of the reasons we need to understand and discuss what the impact of the Civil War is because people suffered and people died.”

By the end of the trip, the students took to calling Jordan and Dancy “mom and dad.”

“It was a great group,” Jordan said. “Not all the time on those kinds of trips do the people bond, but this group really did. It was a powerful learning experience. It was the best teaching experience I’ve had in my career and I don’t know how it will be superseded.” 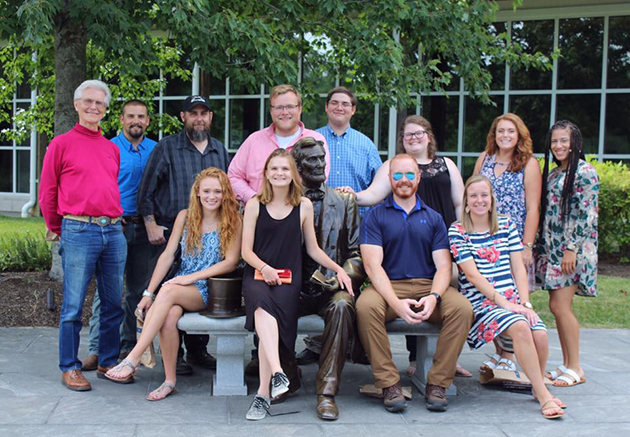