Center Researches Disasters And Emergencies In The Face Of Danger

The impacts and after effects of Hurricane Harvey will be felt throughout Texas for years to come. Not only setting a continental rainfall record in the United States, but according to various sources, the storm could cost hundreds of billions of dollars in damages.

In times of crisis like this, research, preparation and proper response are all needed to ensure the safety of the general public.

A Sam Houston State University center is doing just that and more to ensure proper research and practices are done to protect communities from threats ranging from natural disasters to manmade threats.

The Center for the Study of Disasters and Emergency Management at SHSU is a team of over a dozen scholars from different departments with a goal of promoting interdisciplinary research on similar issues and establish a connection for this research to come together as one, according to Director and SHSU Political Science Professor Jason Enia.

“The center was formally established in November of 2014,” Enia said. “It began as a team of people across the university from different departments and colleges who came together and realized there were a lot of people studying disasters and emergency management. We talked to each other of what research we were doing and then over the course of a year we worked to establish the center. It was exciting to know people in geology or security studies were working on things that are similar.”

The CDEM is located in the political science department because of the recently established three-course concentration in disasters and emergency management, according to Enia.

“We have many firefighters, EMS and public officials who were working in these fields already,” Enia said. “Having a research center dovetails with the concentration in our MPA program.”

During the 2016-2017 academic year, CDEM affiliated faculty published 27 articles/book chapters—nine of which are forthcoming. Additionally, portions of CDEM’s research continue to be funded through external and internal grants, which totaled $350,000 in funding during the past year, according to the CDEM Annual Report.

Looking at the immense damage and devastation caused by Hurricane Harvey, especially with the historic flooding in the greater Houston area, some might think that proper procedures were not in place to protect the city.

“What many people have been talking about, of course, is preparedness in the context of the mitigation phase,” Enia said. “In other words, why hadn’t more been done in advance when we look at greater-Houston’s relationship with flooding and the ongoing predictions about large scale events? This, of course, is a complicated question.”

Enia believes it is important to remember policy decisions have tradeoffs and a lot of this has to do with resource allocation.

“If a city pours resources into mitigation, those are resources that cannot be used elsewhere,” Enia said. “If a city increases its rules and regulations, that increases the costs associated with economic development. Now couple these ideas with the political realities: voters tend to reward disaster relief spending more than they reward mitigation spending. So, the political econmy of the situation helps explain why even if we imagine more public awareness, it won’t automatically change public policy.”

Even with the aftereffects we see from Hurricane Harvey, Enia would not consider the areas effected as unprepared.

“I don’t think I would characterize what we witnessed as unpreparedness,” Enia said. “It really depends on what we mean by the term and what phase of emergency management we’re focusing on. If we are looking at the response phase, for example, I think that many of the county-level emergency management offices and especially the Harris County Office of Homeland Security and Emergency Management were very well prepared. To my eyes, they executed their plans in terms of communication and resource allocations quite effectively given the scope and scale of the event.”

CDEM scholars work in researching disasters, crises and emergencies, some of which are directly related to some of the recent events that we have seen in the United States from Hurricane Harvey to Hurricane Irma.

“The scholars of CDEM are certainly engaged in these issues,” Enia said. “Tom Haase and Fatih Demiroz started a working group on resilience and the questions that surround it last year. Our post-doctoral fellow, Chang-Gyu Kwak, is leading a team with scholars from SHSU, University of North Texas and Florida State University in surveying county-level emergency managers.

“We have a lot of research that spans the phases of emergency management,” Enia said. “We have folks who think about and research resilience in the face of a hurricane or other natural disasters. In the response phase, we have folks who think about evacuation policies and procedures and the constant tensions that exists between individual rights and public safety. We want people to be safe, but at the same time people are on their own property and have to make their own decisions. Emergency first responders deal with this all the time and there is always ongoing research in this subject.”

As for Enia himself, he recently published an editorial with the Foundation for Economic Education about how price-gouging laws have unintended consequences. 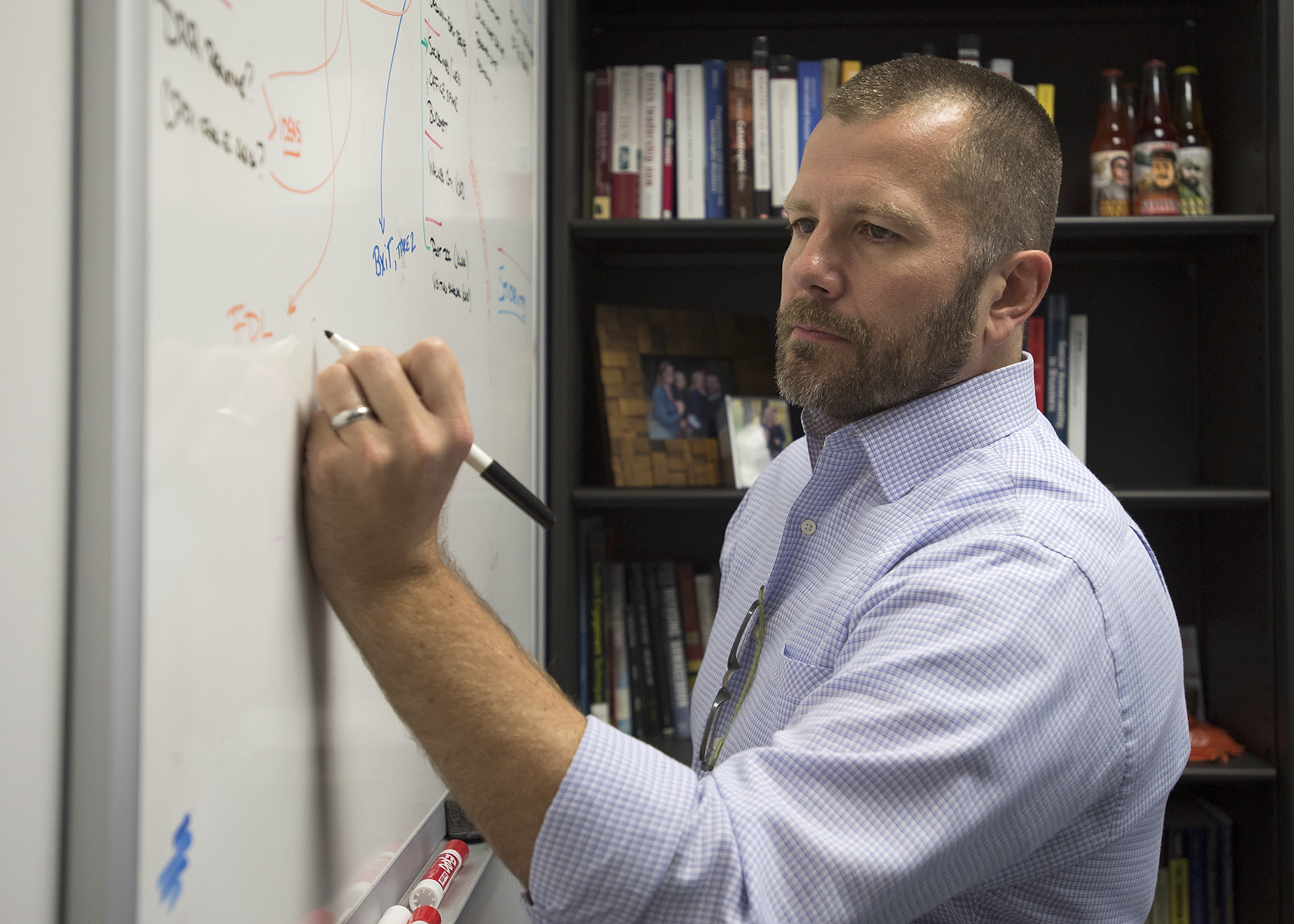 The CDEM also works closely with students at SHSU looking forward internships or future jobs in the various fields that they encompass.

“We have offices we work close with who have internship programs that cover multiple aspects of emergency management,” Enia said. “It’s a tremendous opportunity for our students to get this experience and potential jobs.”

For graduate students, the center helps build professional connections and establishes a place for students to have feedback from their research or even get it published, according to Enia.

“Many of our graduate students are full-time employees and we are a way for them to network into the academic community, network with each other and build relationships that are an essential part of the grad school experience,” Enia said.

The center continues to make an impact on its members and Enia especially.

“My background is actually in international relations and comparative politics, so I came at the study of disasters from a different lens to someone who may have studied disasters and emergency management in graduate school,” Enia said. “My work has pushed me to have a better understanding of the field and has helped me appreciate the interdisciplinary aspect of this field. In academia, we talk a lot of the value of scholars from different disciplines coming together to solve a problem, but it doesn’t happen as often as it should.”

Enia attributes this to the difficulty of bringing together ideas.

“It’s been great to bring people together and attempt to answer the questions that we all have about disasters and emergency management,” Enia said. “Since so many of our ideas go hand-in-hand, there really isn’t a barrier to interdisciplinary research.”