“An Eye for an Eye: A Global History of Crime and Punishment,” originally released in 2015, recently has been re-published in Croatian and Turkish language editions. The book chronicles the history of crime and punishment across the world. This is the first one-volume monograph to explore crime and punishment over the millennia in mostly non-Western countries.

“It’s nice,” Roth said. “It’s flattering that they would have an interest in the book in those countries.”

This is not the first time that Roth has been published in another language. His book, “Crime and Punishment: A History of the Criminal Justice System,” was translated into Farsi. 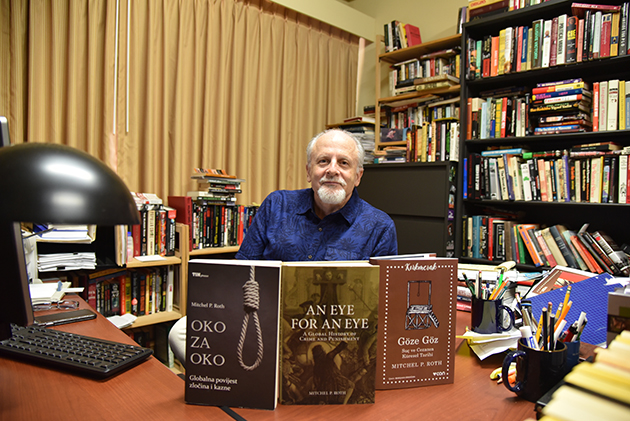 “An Eye for an Eye” traces crime and punishment from early civilization to the present, chronicling practices that emerged along the way. Using a global perspective, Roth examines the creation of laws to uphold a sense of security, justice, and retribution, and the importance of these laws in different cultures and societies. He also examines the evolution of punishment and why certain prohibitions and activities have been punished across the historical continuum.

The book studies a wide array of crime, including petty wrongdoings, sexual offenses, serial homicides, organized crime and modern-day piracy as well as punishments doled out by lawmakers across the world, such as stoning, poison hemlock, forced amputations, and flagellation. The book provides an in-depth look at capital punishment, including beheading, firing squad, lethal injection, hanging, drawing and quartering as well as punishments that have been justified by different cultures and societies across the globe.

Among the topics addressed in the book are:

Roth, who joined the criminal justice faculty at SHSU in 1995, specializes in global terrorism and organized crime, comparative policing, and historical issues pertaining to the criminal justice system and crime. He has written 16 books on a variety of subjects ranging from the Texas Prison Rodeo (“Convict Cowboys”) and the history of the Houston Police Department (“Houston Blue”) to studies on prison history, war journalism, the American West and global organized crime.

Roth has appeared or been featured on CNN, FOX, Al Jazeera, local television and radio stations, the American Heroes Channel series “Gunslingers,” the PBS series “Lords of the Mafia,” the History Channel’s series on the 10 Commandments and others. Roth was selected as a Fellow by Freedom for Defense of Democracies, Counter-Terrorism study in Tel Aviv in 2008. He has served as president of the International Association for the Study of Organized Crime (2014-2016), and is currently Editor-in-Chief of the International Journal of Criminology and Sociology.

“An Eye for an Eye: A Global History of Crime and Punishment” is available through the University of Chicago Press. It also is available in Croatian through Tim Press in Zagreb and in Turkish through Can Yayinlari.