Missouri City native and senior mass communication major Kourtney Spriggins read this year's common reading selection, “An Astronaut’s Guide to Life on Earth,” and, below, reviews the book, it's application to college life, and encourages students to read the book before Nov. 2, when real-life hero Col. Chris Hadfield will come to SHSU to talk about his experiences as the first Canadian astronaut to walk in space. 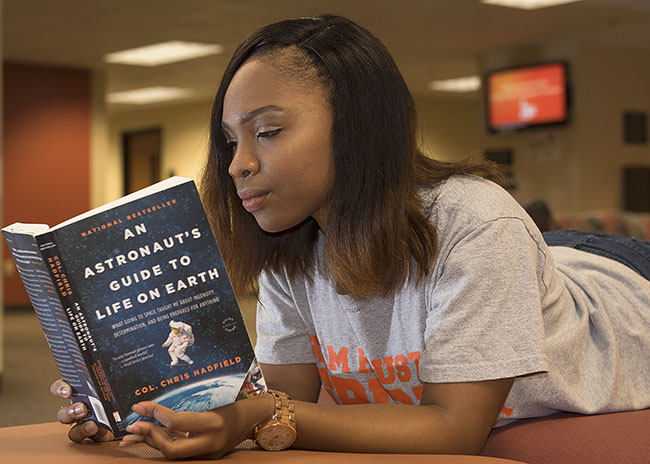 Earlier this summer, the First Year Experience Office presented this year’s common reading selection, “An Astronaut’s Guide to Life on Earth,” to the New Student Orientation team during one of our training sessions with an interactive activity. In the activity, we were given situation after situation and had to come up with a solution quickly. Once we were able to think of one solution, it was time to think of another one. The situations became increasingly unfavorable, especially as we became unable to develop a solution to the previous problem before the next arrived.

After the activity, I realized how much “An Astronaut’s Guide” relates to our college lifestyle, as well as life after college. Our every move in college doesn’t involve an intense, life-or-death decision, like it sometimes did for author Col. Chris Hadfield, but it does influence our circumstances later down the line. Not completing a class every semester could possibly affect your GPA and completion rate, which could also affect your financial aid, which now affects how you pay for your classes. It creates a domino effect.

“An Astronaut’s Guide to Life on Earth” details Hadfield’s experiences leading to his becoming a commander for the International Space Station and life as the first Canadian astronaut to walk in space. But, as in the example above, in many ways, his experiences are relevant to our experiences in college.

At the age of 9, after watching Neil Armstrong step foot on the moon, Hadfield’s heart set on becoming an astronaut. But unlike many children who aspire to become a doctor or a lawyer “when they grow up,” Hadfield began to prepare himself for his chosen career by imagining, and then living by, what astronauts would do. “Would an astronaut eat his vegetables or have potato chips instead? Sleep in late or get up early to read a book?” From that point on, he began to make life choices that, overall, would impact his future. He believed that “if we really want something, we’d push ourselves accordingly.”

After a lot of hard work, and a few disappointments, Hadfield achieved his dream, and his book offers advice on some of the lessons he learned along the way. For instance, in space, you have to maintain something called “attitude,” which refers to orientation. If you lose control of your attitude, your vehicle begins to tumble, spin and stray away from its course. In college, you have to do the same; when you begin to lose focus, things tend to get hectic and you fall behind.

One of Hadfield’s mantras is, “If you have the time, use it to get ready;” he lives a life of being prepared. He values his time and devotes himself to mastering new and old skills that he realizes he may never use but does so just in case an opportunity to use those skills presents itself; this, he believes, can help with conquering fear. This also is an area we can relate to. We’ve all had moments where we would rather take a nap instead of reading an extra textbook chapter, but taking the time to read that chapter is what sets you apart from the student who’s always napping.

Our journey probably isn’t as profound as space exploration, but there are similarities. Our everyday choices build our overall experience in major and minor ways, so it becomes important to make the right decisions in order to eliminate unnecessary chaos. This is how “An Astronaut’s Guide” can benefit students of all classifications. The novel gives insight on how to handle different situations. I took away several things that I’ve applied this semester. In addition, Hadfield himself will visit SHSU in November for the annual Book Forum, during which he will sign books and give a keynote address. Other SHSU authors also will discuss topics related to the novel’s themes, and contests will give students the opportunity to compete for scholarships.

I hope students feel inspired after reading this book the way I was, not only in taking away a new perception on problem solving and study habits, but also to attend the forum to learn about how professors’ works align with Hadfield’s novel and his goals.