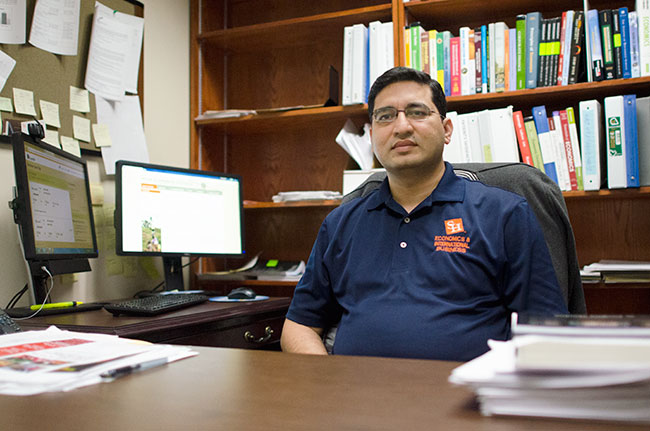 When Santosh Kumar was growing up in India as a young boy, more than 50 percent of the Indian population was living below the poverty line.

Having witnessed the effects of poverty first-hand, Kumar was inspired to do work that would affect positive change for the poverty stricken in India.

When Amartya Sen received the Nobel Memorial Prize in economic sciences in 1998 for his work in welfare economics, Kumar decided to follow in his footsteps, pursuing economics as a means of creating policies that improve the standard of living for poverty-stricken families.

After receiving both his bachelor’s and master’s degrees in India, he moved to the United States to complete his doctorate and begin his teaching career.

Now an assistant professor of economics at Sam Houston State University, Kumar is an applied micro-economist, which means he works on the “micro” level of analysis, or examining how individual households are impacted by the economy.

Like his idol, he specializes in welfare economics, focusing his research on poverty and health issues that affect the people in his home country, in hopes of providing them with the tools necessary to break the poverty cycle and become financially stable and healthy.

“I don’t look at issues in macroeconomics like inflation or economy; I focus on the individual family and look at how economic development affects the household,” he said.

Last summer, Kumar traveled to Thessaloniki, Greece, where he presented his research on the effect that rainfall has on children’s health.

“The idea is based on what economists call ‘Fetal Origins Hypothesis,’ which basically says that the socioeconomic and mental conditions that affect the mother during pregnancy also affects the child in utero,” Kumar said.

In the United States, it’s well known that smoking and drinking can cause negative effects on the health of the child; however, in low-income countries such as India it’s not as widely known.

Since most of the poor people in India rely on agriculture as their main source of income, Kumar said he wanted to see how rainfall affected the health of children.

Of the total geographical area of India, approximately one-sixth of the area which includes 12 percent of the population, is more prone to drought, according to the National Institute of Health.

“They don’t have access to very good irrigation facilities, so if there is less rainfall, there is lower agricultural production and that affects the income of these poor people,” Kumar said. “If they have less income, the poor, pregnant women will have less money to spend on nutrition. So through that, the child who is in utero at the time of drought might suffer from long-term effects.”

Kumar found that some of the long-term effects of less rainfall include lower activity in the classroom and a lower chance that students will attend class. In turn, their education is affected and later, their income.

“Forty to 50 percent of Indian children are malnourished, so not only does it affect their education and income, it also affects how much nutrition children are getting,” Kumar said.

He hopes to design some policies that will help protect families in instances of flood and ensure that their income, as well as their nutrition and education, does not suffer in times of drought.

“We’re trying to create a weather-based insurance product that will insure them from the land and the nature of weather so their income doesn’t fall as steeply,” Kumar said.

Kumar’s ultimate goal with his research is to protect low-income families in India and Africa, where the climate is similar to India, and create a better quality of life for them.

Fifty percent of Indians live off of less than $1 a day, while most Americans pay up to five times that for a drink at Starbucks, according to Kumar.

“In the last 100 years, there has been so much technological advancement, yet more than nine million African children died before their first birthday in 2014,” he said.

Another area that Kumar has researched that he believes affects economic development is the cultural phenomenon known as “son preference,” the idea that because Indian families have a preference for sons over daughters, families whose first and second-born children are female will continue to have children until they have a son.

On the other hand, families whose first-born child is a male are more likely to have a smaller household size.

“What we found in that paper is that having a larger household size does negatively impact the quality of the education that children receive,” Kumar said. “We know that a way to combat this is to reduce the family size and get parents to stop discriminating against their daughters, but how can we do that? We can provide a free supply of contraceptives and create awareness campaigns that inform people of the negative effects of having larger families.”

In addition to the research he conducts and the policies he designs, Kumar also gives back by providing his students with information on how to affect change themselves.

“I teach an upper-level economic development course, and many students tell me that as an economics major, they never thought they’d be learning about people not having access to toilets or clean water. They really enjoy it, though, and that’s why I do it.

“There are so many ways that we as a society can help underprivileged people all over the world, and the only way we can begin to create change is by opening our eyes and acknowledge the problems they’re facing,” Kumar said.