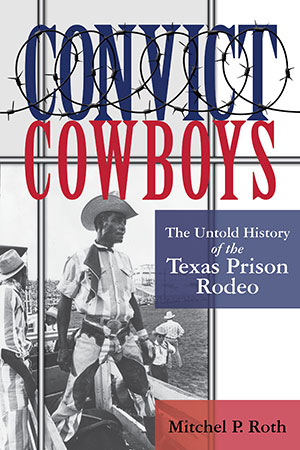 For 55 years, Huntsville held what was at one time the largest sporting event in the state, the Texas Prison Rodeo, starring the most unlikely of sports heroes—Texas prison inmates.

In his latest book, “Convict Cowboys: The Untold Story of the Texas Prison Rodeo,” Mitchel P. Roth documents the annual event, which drew up to 100,000 people a month to Huntsville on October Sundays from 1931-1986.

Also known as the “Wildest Show in the West,” the event featured inmates competing in a super rodeo, which included traditional and outrageous offerings such as 10 bull riders in the arena simultaneously; 40 convicts in red shirts trying to snatch a money-stuffed Bull Durham bag from between a bull’s horns; and a wild mare milking contest.

“They ratcheted it up to make it more dangerous and crazy and to distinguish it from free world rodeos,” said Roth, a professor in the Sam Houston State University Department of Criminal Justice and Criminology.

For inmates, it was a chance to become a star, especially among black offenders who had a loyal following among the African American community in the days of segregation. It was probably the first integrated sporting event in the state, with blacks and whites competing side by side in the arena.

Some convicts, at least according to one source, went as far as carrying ketchup packets to their contests to help fake injuries or to make the match look bloodier. 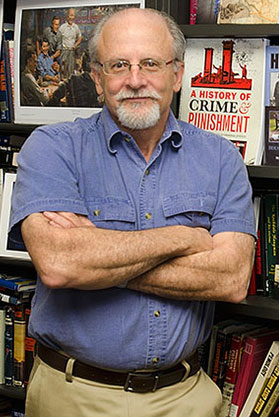 “It was good for their egos,” Roth said of the competitors. “On four Sundays each year, they could be free. It meant they didn’t have to pick cotton for the month; it gave them more freedom, and they vicariously enjoyed the free world. While the rich came to see the convicts, the inmates, in turn, got to watch the audience and dream of what it would be like to live their lives.”

Over the years, the rodeo grew and prospered, attracting many celebrities to the small agricultural town, especially Western folk legends such as John Wayne, Steve McQueen, Tom Mix, Johnny Cash, and Willie Nelson. Some of the famous guests contributed to the Bull Durham, the satchel placed between the bull’s horns, a coveted prize among inmates. Inmates could earn a $50 to $1,000 prize.

“It went a long way in the prison commissary,” Roth said.

The rodeo was started by Superintendent Marshall Lee Simmons and continued through the administrations of O.B. Ellis and Dr. George J. Beto, one of the founders of Sam Houston State University College of Criminal Justice. The rodeo began on the prison baseball field as a way to entertain inmates and employees, but quickly grew in popularity among neighboring communities. At the height of its popularity, the rodeo was invited to the State Fair in Dallas/Fort Worth, where it had an 8-day run. The only year it was cancelled was in 1943 during World War II.

Surprisingly, there were very few incidents involving inmates at the rodeo. It was the prisoners’ chance to shine and get positive feedback, and they vigorously competed for a coveted spot on the team. Performers also earned the right to be a spectator for a day in the bleachers.

By the 1970s and 80s, when state budgets increased for prisons and litigation grew among inmates, the rodeo shut down. It was the end of an era for the Wild West in East Texas, a region better known for its cotton than its cowboy gravitas.

“Convict Cowboys” is published by the University of North Texas Press and can be purchased at untpress.unt.edu/catalog/3714.