The latest edition of Heritage magazine explores the convergence of science and technology as the SHSU College of Sciences becomes the College of Science and Engineering Technology. The change was facilitated by a $25 million donation by SHSU alumnus Fred Pirkle and will culminate with the opening of the Fred Pirkle Engineering Technology Center next year. To learn more about the center, or read other stories from Heritage, click here. 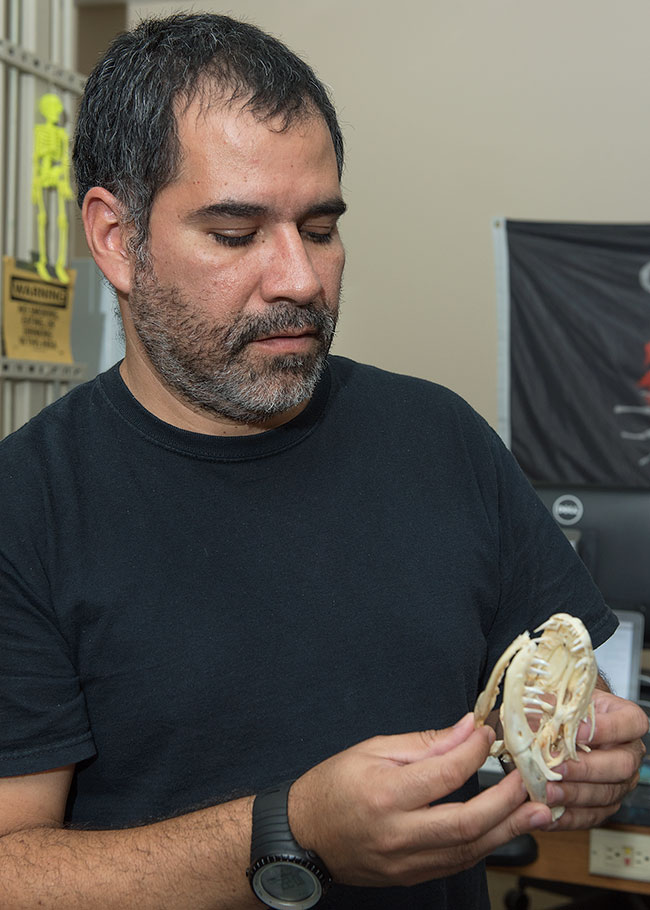 Assistant professor of biological sciences Juan Diego Daza shows off a 3-D-printed lizard skull recreated from the CT scans of a specimen from the Myanmar collection, the oldest assemblage of fossils trapped in amber, dating back 100 million years, when dinosaurs still roamed the earth. —Photo by Brian Blalock

Finding proof where very little exists is among the jobs of a scientist.

Daza was a post-doctoral fellow at Villanova University, located near Philadelphia, when he received what would become a once-in-a-lifetime offer.

David Grimaldi, an entomologist at the American Museum of Natural History in New York, was reaching out to Aaron Bauer, the researcher with whom Daza was completing his fellowship, regarding a collection of rare fossils trapped in amber that had been found by miners in Myanmar. He was looking for lizard experts to help him examine the collection.

“With CT scans, we can do 3-D models of the animal,” Daza said. “Looking through the amber is fine, but if you’ve ever looked at something through glass or that is embedded in glass, the image can be distorted. But X-rays pass through the amber and are able to give us a sharp image.”

Detailing the past: Among the unique attributes of the Myanmar collection is the unprecedented preservation of the fossils, which allowed researchers to see never-before-witnessed details of fossilized lizards, including the scales (as shown above). —Photos by David Grimaldi

Upon arriving in New York, Daza began what would become a two-year project examining the Myanmar specimens, comparing the tiniest of details from the amber scans to previously known fossilized lizard groups, as well as to living species, in an effort to identify and classify the Myanmar fossils.

“When you find something that’s strikingly different from known lizard groups, you start realizing that there is something that doesn’t match, and you can be confident that you might be facing a new species,” Daza said. “Finding the position of these fossils in the lizard tree of life is not a matter of opinion; you need to sit down and go through a long list of reptile features; then you do a Phylogenetic analysis and the computer calculates the best placement on the tree.”

What the researchers found was that the Myanmar fossils were the oldest, most diverse assemblage ever encountered of fossils trapped in amber, dating back 100 million years to the middle Cretaceous period, the same time when dinosaurs still roamed the earth.

Not only that, but the lizards were extremely well preserved, and the researchers encountered never-before-seen details, such as the lizard’s scales.

“Scales are soft tissue and they decay fast; normally what you recover in a fossil is the skeleton, but in this case, we have scales,” Daza said. “One even has a tongue! When it was trapped, the tongue was sticking out and you can see the details of the tissue covering the surface of the tongue. It’s amazing!

“Before this publication, there was only one fossil described and it was described as a gecko, but what was represented in that was only a piece of a tail and a leg, enough to tell you something but it was not very complete,” he said. “When we started finding more animals in a better state of preservation, it was like a trip to the past that has allowed us to see things nobody has seen before. Everything that we kept finding was something new.”

Ultimately, the research found that the Myanmar fossils contained lizards that are among the closest relatives to geckos and chameleons, as well as one lizard that resembles the inferred ancestor of all lizards.

“Now, not only can we predict that they were present but there actually represents a specimen that we can see how geckos looked in the past,” Daza said. 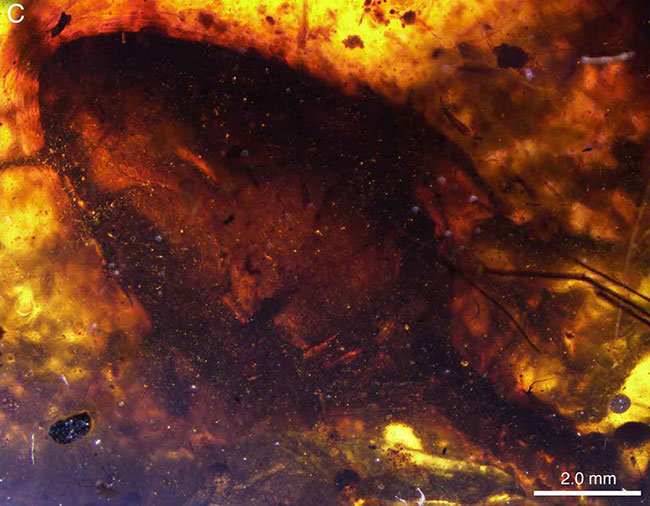 A picture of the oldest-known gecko, which was found preserved almost entirely, with completely articulated bones. —Photo by David Grimaldi

When Daza and his peers published their findings, it took the science world by storm. As the principal investigator, Daza received interview requests from journalists all over the world, and his abstract was read by more than 17,000 scientists and science aficionados, including large concentrations in Japan and the United Kingdom.

“Normally when I write a paper, only 20 or 30 specialists would read it, but 17,380 people have read this paper,” he said. “That’s pretty unusual for any field in science.”

The project also is the gift that keeps on giving for Daza. Not only is his student team at SHSU continuing to work on aspects of the fossils by writing more descriptions and using 3-D printing to recreate the skeletons of the fossils, but he’s working with a paleo-artist to provide renderings of what they’re working on.

“There are still newer things we’re learning,” Daza said. “We have more ongoing projects, we’ve started getting more and more material, so there is more coming from this; it’s very exciting. We’re going to be occupied for the next 10 years.”