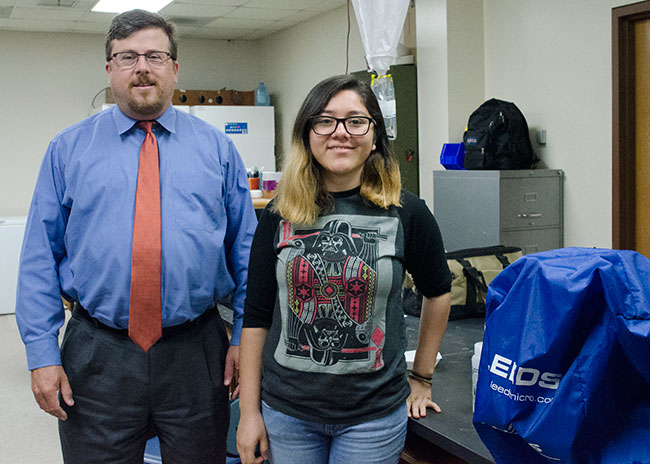 (Above) College of Sciences Dean John Pascarella and senior biology major Merary Bautista have joined forces to examine bees in the Huntsville area in a research project that has brought Pascarella back into the lab. —Photos by Brynn Castro

The Sam Houston State University senior biology major has always had an interest in entomology; now, she is using that interest to assist College of Sciences Dean John Pascarella with his “buzz-worthy” research.

Bautista began working with Pascarella on a research project that involved collecting bees at the SHSU Center for Biological Field Studies and identifying the various species they collected in the lab in order to study populations of bees in Huntsville’s particular environment.

“When I was accepted to the McNair Scholars program I had to decide on a research project,” Bautista said. “I was interested in bugs and I hadn’t actually studied them yet, but I spoke with Dr. Sybil Bucheli, who focuses on forensic entomology, and she put me in touch with Dr. Pascarella.”

When Bautista began assisting Pascarella, she was a bit nervous about what she was getting into, but her trepidation subsided quickly.

“I was afraid of bees in the beginning,” Bautista said. “A large part of the research was focused on collecting bees from the Center for Biological Field Studies, and I was sure I was going to get stung.

“I soon discovered that bees are actually really peaceful,” she said. “When they are feeding and foraging outside, they are concentrated on the task at hand, so they will generally leave you alone. As long as you stay away from their hives, there is a very low likelihood that you will get stung.”

With that fear out of the way, Bautista was able to proceed with the gathering of bees from six sites at the center.

“At each site, we look at the numbers of bees that are collected and which species of bees are found,” Bautista said. “We determine how many bees are male and how many are female and carefully record all of that data.”

According to Bautista, all of the sites at the center have different features, and each feature tends to attract different species of bee. After collecting the bees, Pascarella and Bautista proceeded to the lab to identify the different bee species they found. 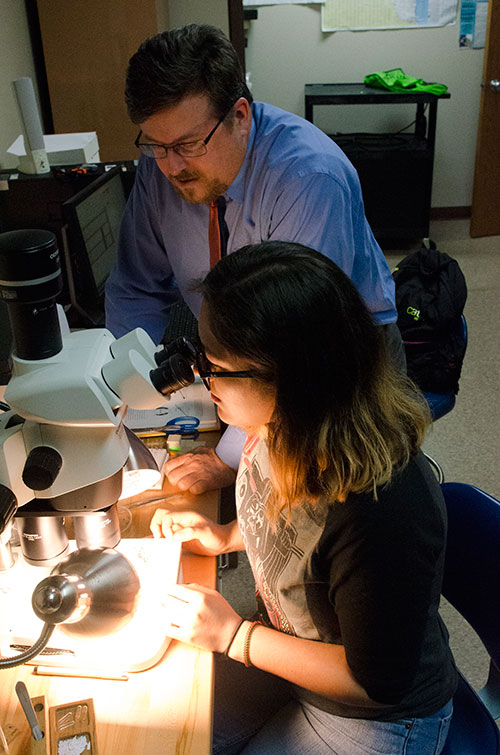 “There are about 100 different kinds of bees Dr. Pascarella and I have identified just in the Huntsville area,” Bautista said. “It takes me a little while to identify each different bee species because I have to take anatomical measurements of each one and compare my findings to a key, but Dr. Pascarella can correctly identify most of them by sight alone.”

There are approximately 800 different kinds of bees in Texas, and that doesn’t even begin to touch the different species located in other states and countries, according to Bautista.

“Part of the reason there are so many different types of bees is because what each bee does is so specialized,” Bautista said. “While there are species of bee that will pollinate multiple different plants, there are others that are very specific."

One trend Pascarella and Bautista have found in their research is the decline of several bee populations.

“We don’t really focus on conservation research, but we do collect vital data for conservationists about the bees in the area,” Bautista said. “I think it’s important for people to understand the role that bees play in the ecosystem, and to understand the implications of declining populations.

“They are absolutely necessary for the pollination of plants,” she said. “If we ever ran out of bees, we would lose flowering trees that make our landscape more beautiful and our air easier to breathe, as well as populations of crops and flowers that are necessary for food. If we were to lose bees, the results would be catastrophic.”

In addition to opening her eyes about the impact bees have on nature, helping Pascarella has provided opportunities for Bautista that she might not have had otherwise.

“I’ve always been interested in math and science,” Bautista said. “This work in population ecology has really proven to be a good marriage of both those interests.

“Working with Dr. Pascarella, too, has been an amazing experience,” she said. “He is so knowledgeable and patient, and he is always generous when it comes to sharing opportunities to tell people about this research.”

Prior to working with Bautista, Pascarella’s interest in pollination biology in bees was a topic that he placed on hold in order to focus on administrative responsibilities. However, in 2014 his passion for the topic was rekindled by the opportunity to mentor another student in a directed study. The previous student has since graduated, but when Bautista requested to assist him, Pascarella was happy to let her step in to continue the research.

In addition to helping with the project, Bautista has attended several conferences and had the opportunity speak to other professionals about the research findings.

“The conferences have made me a more confident public speaker, and they have been great for networking and opening other doors,” Bautista said. “I think there are a lot of experiences that I’ve had here at Sam Houston that I might not have at another university.

“Conducting research under the guidance of someone as accomplished as Dr. Pascarella has been such an amazing opportunity,” she said. “Thanks to this experience, I am confident and excited about my future as a researcher.”