Synthetic cathinones, or “bath salts,” continue to be popular among recreational drug users, and a new study by Sam Houston State University, funded by the National Institute of Justice, highlights the challenges associated with the detection of these drugs in biological evidence.

Synthetic cathinones—derived from cathinone, which is present in the khat plant—produce effects similar to amphetamines and have been associated with numerous fatalities from recreational use. Although the Drug Enforcement Administration banned some synthetic cathinones in 2011, new designer drugs continue to appear, presenting a real challenge for forensic laboratories.

“State and federal efforts to curb the use of these drugs have had some success, but the proliferation of new synthetic cathinones presents an ongoing challenge to the forensic community,” said Sarah Kerrigan, chair of the SHSU Department of Forensic Science. “The forensic community’s analytical methods must keep pace with illicit drug trends, but not all laboratories are capable of testing for these drugs, despite the fact that their use may have very serious public health and safety consequences.”

Many forensic laboratories routinely use gas chromatography/mass spectrometry to detect the use of drugs in biological samples in fatalities, intoxication or impaired driving cases. However, some of these drugs may actually degrade during the process. 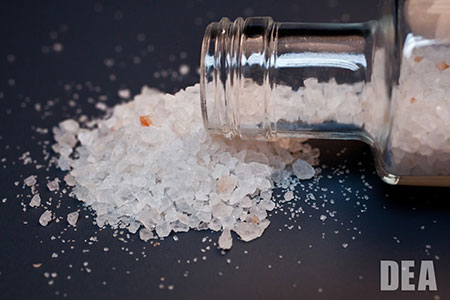 Bath salts were traditionally sold in smoke shops and on the Internet and following the banning of cathinones, manufacturers were quick to replace them with new alternatives to circumvent current legislation.

Because of these changes and continued sales on the Internet, it is difficult to regulate, legislate and enforce the laws. In addition, many toxicology labs do not test for these drugs, according to Kerrigan.

While identifying these substances in seized drug materials such as pills and powders is relatively easy, it is much harder to detect them in biological evidence. Identification is hampered by drug instability and the possibility of thermal degradation during analysis.

Due to the speed at which these drugs have evolved, the SHSU study calls for a systematic approach to understand how the various structural facets of the synthetic cathinones influence their stability. This approach is believed to be more likely to lend itself to meaningful interpretation of newer analogs and derivatives that have not yet been developed or are still emerging as new designer drugs.

The report, “Improved Detection of Synthetic Cathinones in Forensic Toxicology Samples: Thermal Degradation and Analytical Considerations,” is available from the National Criminal Justice Reference Service at ncjrs.gov/pdffiles1/nij/grants/249251.pdf and was recently published in the Journal of Analytical Toxicology.