It’s not often you have sixth, seventh and eighth graders volunteer to go to class on a Saturday, much less do so when their bus ride to class takes longer than three hours.

But 42 students from Dan F. Long Middle School in Carrollton mustered plenty of enthusiasm when they learned their class would be at Sam Houston State University and would involve learning inside and outside of the classroom.

The students, along with a few parents, arrived on May 21 and were greeted by LEAP Center ambassadors, who had planned an eclectic set of activities for the group of students, who are part of the Advancement Via Individual Determination Program, a non-profit that works with teachers to prepare students for college success.

The LEAP ambassadors and the Carrollton AVID coordinator Robert Loughran—himself a former LEAP ambassador and SHSU alumnus—planned a mock college class, a tour of SHSU’s campus, and a visit to the Texas Prison Museum.

The day’s activities were, according to LEAP ambassador Brian Aldaco, designed to be fun and educational, a combination that “we believe accurately reflects our learning experience at SHSU,” he said.

LEAP provided a taste of Huntsville’s rich dining culture by lunching at Carbonero’s for some El Salvadoran fare. Along with LEAP ambassadors Aldaco, Austin Campbell, Megan Chapa, Alejandra Galvan, Karla Rosales, and Kaitlyn Tyra, the students enjoyed an assortment of Salvadorian dishes such as chaufa rice and pupusas.

The middle schoolers employed this time to familiarize themselves with their college mentors while being exposed to a new style of cooking, according to LEAP director Mike Yawn.

Energized by a tasty lunch, the prospective college students showed up well prepared for a mock class at SHSU, conducted by Yawn, a political science professor. 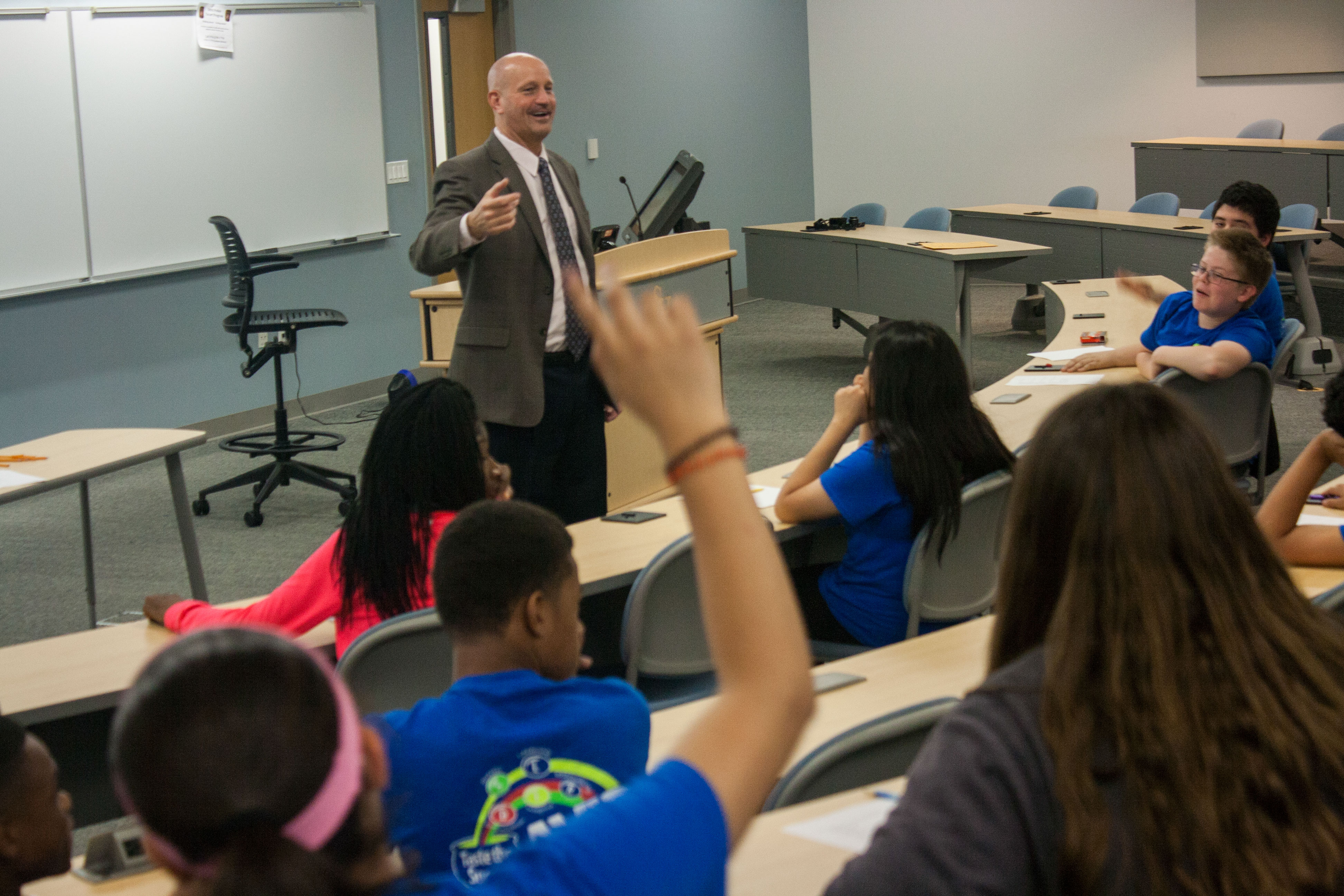 Mike Yawn addresses constitutional law with the students during their visit.

The class provided a feel for a college student’s academic routine with a quiz at the beginning of class (based on previously assigned readings), an interactive lecture involving role-playing, and a provocative discussion about technology and politics, according to Yawn.

And that was part of the plan.

According to Loughran, of the more than 40,000 AVID seniors in the United States last year, approximately three-quarters of the students have parents without college degrees and are on reduced-cost lunch plans.

“Studies show that AVID students are likely to be successful if they receive support, and we hope that the day’s activities contribute to that support,” said LEAP program coordinator Jean Loveall.

The campus tour proved one of the popular day’s activities, with LEAP ambassadors highlighting the campus’s various facilities, programs, and rich history.

The students were impressed by David Adickes's statue of Gen. Sam Houston on campus, and they enjoyed the campus’s Bearkat sculpture—even leaving pennies under the mythical creature’s belly for good luck.

The students capped their day with a visit to the Texas Prison Museum, where they were welcomed by museum director and former Walls prison unit warden Jim Willett, who provided a compelling overview of the prison, its functions, and its history.

This overview, enhanced by the museum’s exhibits, prompted curiosity and wonder among the students, Yawn said.

Jose Altamarino, for example, expressed interest in the shackles used to restrain inmates, as well as the frighteningly creative contraband on display: homemade tattoo machines, bootleg whisky distillers, and numerous weapons designed surreptitiously by inmates. Also interesting were the inmates’ works of art: a chessboard made of soap, the beautiful woodwork, and the inmate-crafted items for sale in the gift shop.

It was a thought-provoking end to a long day of learning for students who are still crafting their own lives, Yawn said.

“That these young people voluntarily gave up their Saturday fun for a day of fun learning speaks well of their future, which several of the students indicated would involve Sam Houston State University,” he said.

As Cassandra Busby—a seventh grader—said to Yawn as she boarded the bus to leave Huntsville, “See you in class in five years!”

With some support, she’ll be joined by many of her classmates, ever AVID about learning.