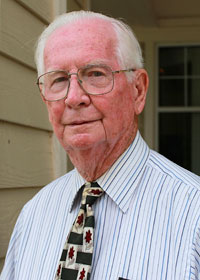 Known throughout the Brenham area for his commitment to education, historical preservation, and service, Wilfred Dietrich has long been dedicated to helping his community equip future generations with the work ethic and compassion he models in his life.

He spent 42 years as a professor and department chair at Blinn and was recognized for his accomplishments by being named to Blinn’s Hall of Honor in 2004.

Since 1997, Dietrich has served as a volunteer every Wednesday morning and Sunday afternoon at the George Bush Presidential Library in College Station.

He is a significant financial sponsor of the Brenham Children’s Chorus, Simon Theater Project, Senior Citizen Center, University of Texas Communications Building, and he personally funded markers for all unmarked graves at St. John’s United Church of Christ cemetery and other marker projects.

He contributed more than 25 years to scouting and has attended two International Jamboree events, including the one held in Valley Forge in 1950, where then-future President Dwight D. Eisenhower delivered the address on the Fourth of July.

Dietrich lives in Brenham, where he and Bobbie made their home together for over 40 years.