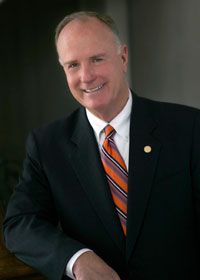 Before returning to his alma mater as president in 2001, Gaertner served in various capacities at the University of Texas at San Antonio, including dean of the College of Business and interim provost and vice president for academic affairs. His career includes seven years at the University of Notre Dame where, among other positions, he served as director of their London Master of Business Administration program.

He is a member of the board of directors for Tandy Brands Accessories, Inc., and served as board chairman for 11 years. He has been a member of the board of trustees for U. S Global Investors since 2002 and is chair of the audit committee. After his retirement from SHSU in 2010, he served briefly as the interim vice chancellor for academic affairs for the Texas State University System.

Under his leadership at SHSU, enrollment grew by 33 percent and the number of students graduating increased by 52 percent. The university also achieved a Carnegie Doctoral Research classification, placing SHSU in the top 7 percent of all institutions in the United States, and three new doctoral programs and 14 new masters programs were initiated.

Nearly $280 million in construction projects were completed, including such notable campus landmarks as a bell tower and outdoor plaza, a performing arts center, a parking garage, new residence halls, new academic buildings and additions, facilities for athletics, a visitors center, and dining facilities. Gaertner also directed the establishment of an SHSU campus in The Woodlands.

He initiated the university’s first capital campaign in which more than $61 million in commitments were raised, passing the $50 million goal set at the beginning of the campaign.

Other occurrences under his direction include: the establishment of the Official Ring Ceremony, the President’s Speaker’s Series, and the Alcohol and Drug Abuse Initiative for students; a reorganization of existing university structure and the implementation of new programs and projects; and the establishment of over 40 articulation agreements with community colleges in Texas, making SHSU a leader in such agreements in the state.

Gaertner and his wife, Nancy, make their home in Huntsville. They are the parents of three children—Scott, Denise and Amanda.