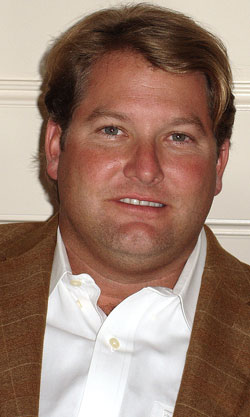 A young entrepreneur who took a small company and developed it into a major corporation to help life return to normal for victims following a catastrophe has been named the Outstanding Young Alumnus for Sam Houston State University.

Peter Bell of Houston received the Bachelor of Business Administration degree from SHSU in 1993.

At the age of 26, while working in the restoration industry, Bell had the opportunity to start his own company.   His plan was to modernize the old services, which were being used in the restoration business while focusing on improving customer service at the same time.

The new venture was named Cotton USA and has evolved into a national disaster recovery business that specializes in catastrophe management, fire and water restoration services, commercial construction, and environmental remediation.

Bell's company began with a staff of four employees in Houston.   Today, Cotton USA has offices in eight states and conducts business throughout the United States, Canada, Mexico and the Caribbean Islands, and employs more than 400 people.   In its brief history, Cotton USA has twice been named one of the top 100 privately held companies making the greatest impact on Houston.

In March 2007, Charys Holding Company purchased the company; however, Cotton retains its name and brand as well as its leadership, and Bell continues to serve as president.

He and his wife Jill Miller-Bell, also a graduate of Sam Houston State, support a number of philanthropic causes.   They created the Cotton Foundation, which is dedicated to helping children restore their lives after illness, injury or catastrophic events. The organization has also reached out to help victims of Hurricane Katrina.

Those individuals endorsing Bell's nomination for the Outstanding Young Alumnus Award often mentioned his compassion and generous spirit as well as his work ethic:

"Over the past 17 years, I have had the honor to see Pete grow as a person, businessman, entrepreneur, father, husband and philanthropist," said fellow alumnus Randall Thompson.

"In every role Pete has conducted himself as a man of good character with ambitious purposes for all, possessed of good morals while having the highest sense of honor and the deepest sense of personal responsibility," Thompson said.   "Pete has impacted thousands of people with career opportunities, leadership and an unconditional giving heart."

"He has gone on to support the university through giving, time, and continuously marketing and promoting Sam Houston State to every family and young person trying to decide their college path," Thompson added.   "Truly believing in the value of the Sam Houston product, Pete has hired many Sam Houston graduates over the years and currently has many working in key management roles for his company."

"Pete has touched many lives at work, in the community, and through the Cotton Foundation for children," said another Sam Houston alumnus, James Scaife.