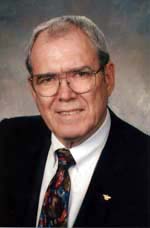 Carol McGuire graduated from Chico High School in 1957, graduated from Kilgore Junior College in 1959, and received a bachelor's degree in industrial arts from Sam Houston State in 1961.

He was commissioned into the U. S. Marine Corps, serving from 1961-1966 as a pilot, landing signal officer, attack class officer, intelligence officer, and assistant operations officer, with units involved in the war in South Vietnam.

He volunteered for the U. S. astronaut corps, and worked for Braniff Airways from 1967-1982, flying the British/French supersonic transport Concorde between Dallas and Washington.

In a July 2000 interview with the Houston Chronicle, he gave this view of the SST, which had recently crashed:

"The plane handled very well. It was a lot of fun to fly. It took off and you could climb up quickly, 6,000 feet a minute, so you climb much faster than a conventional airplane. It was the most safe airplane I think I've ever been in."

He worked for Piedmont Airlines, which became USAir in 1990, from 1983-1999, and in March of 1993 was forced to take medical leave because of the development of Parkinson's disease.

He has since worked to help those suffering from Parkinson's and other conditions, and is known for an attitude best summarized in his saying, "I have Parkinson's, but Parkinson's does not have me."

Texas Governor Ann Richards commended him in 1993 "for your tireless dedication and generous service as a volunteer through the Houston Hospice." He also founded a support group at the Northwoods Presbyterian Church of Houston.

He is retired and lives in Houston, and has kept active through his support work and studying such continuing education subjects as stained glass craftsmanship and Spanish.

"Carol has served as a role model for those who have an appreciation of the incalculable contribution to society one can make by turning a challenge into an opportunity," said Ken Jordan, a classmate of McGuire's at Sam Houston State and a career Marine. "In this capacity he has brought great credit on our university as well as his community."

As profiled at the November 9, 2001 Distinguished Alumni Banquet