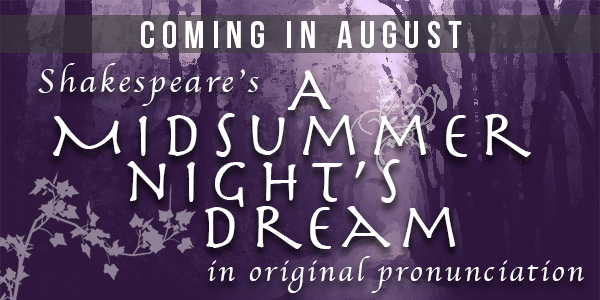 
Original Pronunciation (OP), the Early Modern English pronunciation of Shakespeare’s day, brings us as close as possible to how Shakespeare’s plays would have sounded when they were first performed by The King’s Men. It enables us to hear effects lost when old texts are read in a modern way. Rhymes that don't work in modern English suddenly work, puns missed in modern English become clear, new assonances and rhythms give lines a fresh impact. OP illustrates what is meant by speaking 'trippingly upon the tongue.' OP motivates fresh possibilities of character interpretation. The sound is very exciting and earthy.

Additionally, this production will use original music known to be have been used by Shakespeare in his plays. Come hear Shakespeare the way it would have sounded 450 years ago! The show is being directed by Penny Hasekoester with Dr. Laura Avery as dialect coach and music director.

Tickets go on sale July 1! For ticket information, contact the University Theatre Center Box Office at 936.294.2339 or purchase your tickets at our Online Box Office. Summer Repertory tickets are $10.