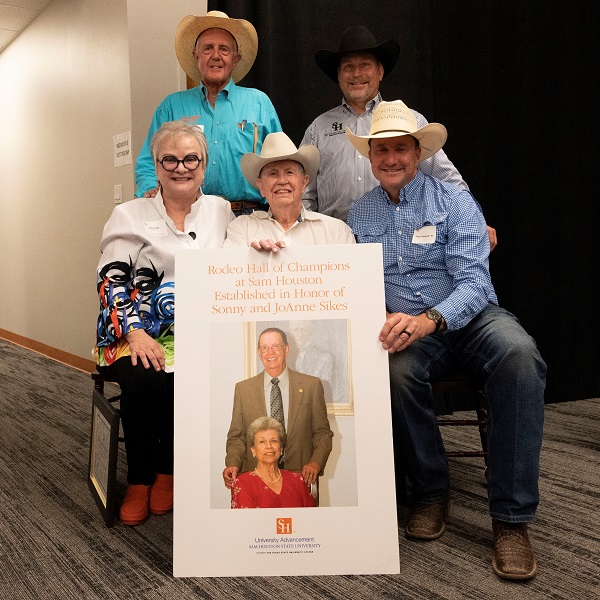 Sam Houston State University Office of University Advancement has announced the creation of the SHSU Rodeo Hall of Champions to be located in the future Agricultural Sciences Complex at Gibbs Ranch which is currently under development.

The Hall of Champions will pay tribute to the rich history of a renowned program that began 70 years ago when Sonny Sikes competed as a SHSU student, winning four national championships.

“What happened 70 years ago with Sonny Sikes and what happens every day, including now, is about our students. We are building something for our incredible students. I am excited to see what the next 70 years will bring,” President Alisa White said.

Sikes returned to his alma mater in 1959, where he served as a professor of agriculture and the SHSU rodeo coach for over 40 years. Under his guidance and leadership as rodeo coach, SHSU won more individual and team championships than any other National Intercollegiate Rodeo Association (NIRA) school.

In 1960, Sonny and his wife Joanne were hired by the NIRA and brought growth and stability to the organization for 18 years.

“Sonny and Joanne dedicated their work to the NIRA and took it to a new level. Through their commitment to college rodeo and Sam Houston State, they established a standard of excellence, beyond anywhere. Because of that, we have a winning, championship program,” Roger Walters former SHSU rodeo coach and and NIRA Commissioner said.

Only four individuals have served as coach in the history of SHSU rodeo. Each continued the winning tradition that Sikes set in motion in 1952 as a student. Roger Walters coached from 1999 through 2002, followed by Roger Hanagriff from 2003 through 2007. Both enjoyed successful seasons at SHSU. In 2001, Walters earned National NIRA Coach of the Year honors, with Hanagriff receiving the same honor in 2006. In 2008, Walters began his tenure as commissioner of the NIRA, which he held until 2021.

Coach Bubba Miller joined SHSU in 2008. Under his leadership, numerous individual event champions and team championships have allowed SHSU to continue as the top-ranked NIRA school with the most individual event and team wins in the history of the organization.

The Office of University Advancement has also launched the Rodeo Hall of Champions Scholarship Endowment. This will provide funding for scholarships to recruit the most talented students to the rodeo team and continue a long-standing winning tradition.

Currently in the first phase of construction, the new Agricultural Sciences Complex will propel the rural property of Gibbs Ranch into a premier agricultural teaching and research facility while serving as the new home for the SHSU rodeo team. Features include a multi-purpose agricultural arena and rodeo team stall barn, practice arena, plant and soil science center, learning center with classrooms, labs and workspaces, travel and RV hook-ups.

Gibbs Ranch was once owned and managed by local businessman, rancher and community leader, W.S. Gibbs. In 1993, Ruth Farrington Farris, Gibbs’ widow, deeded a 124.94 acre tract, known as “the home place” to SHSU.  In June of that year, the remainder of the Gibbs’ property, 1,459.95 acres, was deeded to the university by the Sam Houston Foundation.