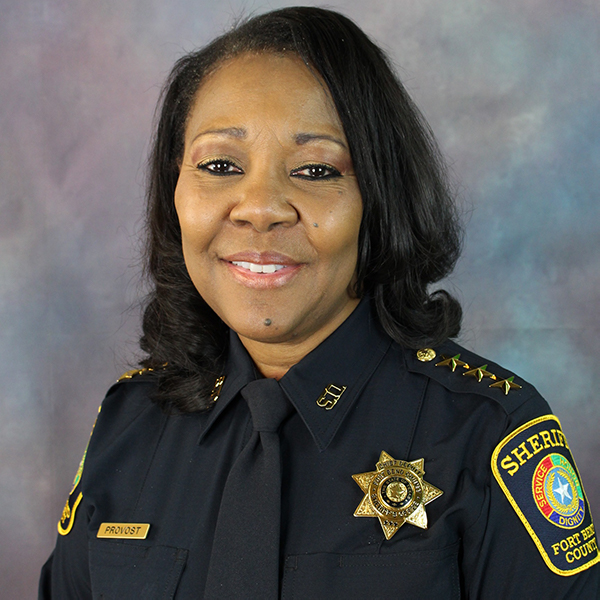 Chief Deputy Provost was recognized at the annual TCDA conference on June 9.

The annual Melvin Drum Chief Deputy of the Year Award is the TCDA’s highest honor, named for the former chief deputy of Ochiltree County. Chief Deputy Drum was not only an outstanding chief deputy but was also extremely involved in his community. Chief Drum lost his life in the line of duty while conducting a traffic stop connected to a domestic disturbance on March 28, 1987.

"Mattie Provost is a well-respected, exemplary leader who serves with excellence as chief deputy. It’s no surprise to me that her peers would recognize her in this way,” said Sheriff Fagan. “We are blessed to have her on our Executive Command team and our Fort Bend citizens are blessed even the more."

Since the start of her FBCSO career in January 2021 as chief deputy, Chief Deputy Provost provides overall leadership and direction on all aspects of the Fort Bend County Sheriff’s Office. She brings more than three decades of professionalism to the agency.

Chief Provost earned a Bachelor of Science degree in Criminology and Corrections and Master of Science Degree in Criminal Justice Management from Sam Houston State University. She began her career at the Houston Police Department (HPD), moving up the ranks to Assistant Chief. She retired from HPD in March of 2017 with an honorable discharge.

Chief Provost previously credited Sam Houston State in preparing her for a long and successful career in law enforcement.

“My time at SHSU prepared me both intellectually and socially,” she said. “The skills and knowledge I accrued helped to qualify me as well as prepare me for my career in law enforcement.”

Provost is the first woman and first African American to serve as the chief deputy of the Fort Bend County Sherriff’s office.

“Women bring their own set of skills and very unique qualities to a traditionally male-dominated field,” Provost said. “I believe I have had a positive impact on the communities I served and provided positive change to the agencies in which I have worked. While the shift work can be difficult on a family, it is a career that is very rewarding.”

Chief Provost is a graduate of the Federal Bureau of Investigations National Academy, Session #241, the Senior Management Institute for Police and a graduate of Leadership Houston, Class XXV. She is a member of the Police Executive Research Forum, International Association of Chiefs of Police, and the National Organization of Black Law Enforcement. A certified mediator and Texas Crime Prevention Specialist, Chief Provost earned the Texas Law Enforcement Master Peace Officers’ Certificate. She has served on numerous committees within the law enforcement arena as well as in the community.