This Today@Sam series features select SHSU students who participated in recent internships. If you (or a Bearkat you know) would like their internship considered, email cja074@shsu.edu. 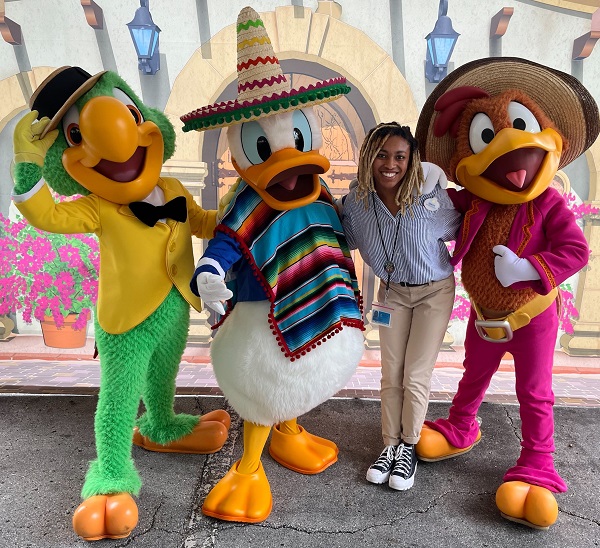 Whether or not you believe in magic, it’s hard to deny the joy Disney World brings to countless children every day. The Orlando-based amusement park is just one aspect of the entertainment giant’s mass influence on the world.

From movies and streaming services to the most notable sports media outlet around, the Disney Corporation and its assets are as diverse as it gets. With such a wide scope and constant exposure, it’s important to maintain a prestigious communications department from top to bottom.

Sam Houston State University’s Trinity Hardy is quite familiar with Disney, especially when it comes to her home park, Walt Disney World in Orlando. After participating in the Disney college program in 2020, the senior mass communications major returned to the most magical place on earth as a communications intern in the summer and will remain in the position through June 2023.

“In 2020, I worked in costuming at Magic Kingdom,” Hardy said. “That is how I developed my love for the theme park industry.”

This time around, the duties of her internship include internal communications work off-site as well as supporting partners like public relations, public affairs, and the social media teams with in-park activities. Writing is a large part of her responsibilities as she sends out emails, ghostwrites blogs, and manages the calendar for Disney Live Entertainment communications and social content planning. In short, Hardy is tasked with helping communicate Disney’s message to the outside world and supporting  internal teams.

“Most of the time, I am in the office working on our creative leads and with our production teams,” Hardy said. “I have a lot of experience writing as a student at Sam Houston State and that is a big part of what I do now. Being familiar with journalism, television journalism specifically, really helped during the interview process.”

The most exciting part of her job, however, takes place in the park itself.

“I get to go to a lot of overnight rehearsals for our productions,” Hardy said. “This includes rehearsals for productions like Mickey’s Not-So-Scary Halloween Party, filming for the D23 Inside Disney Podcast, Festival of the Lion King in Animal Kingdom, Cast previews for our nighttime firework show, Disney Enchantment, and more.”

She also frequents the park with the social media teams to ensure they are capturing content that represents live entertainment in the best way possible as well as following other company guidelines.

When asked how SHSU prepared her for her internship, Hardy pointed to the university’s diversity and inclusion efforts and compared it to that of Disney.

It’s that same diversity that makes Hardy want to remain with Disney in the future if possible.

“Disney is really purposeful about their equity and inclusion work and their social responsibility,” Hardy said. “That really appeals to me because we have the influence and resources to really drive progress in those areas.”