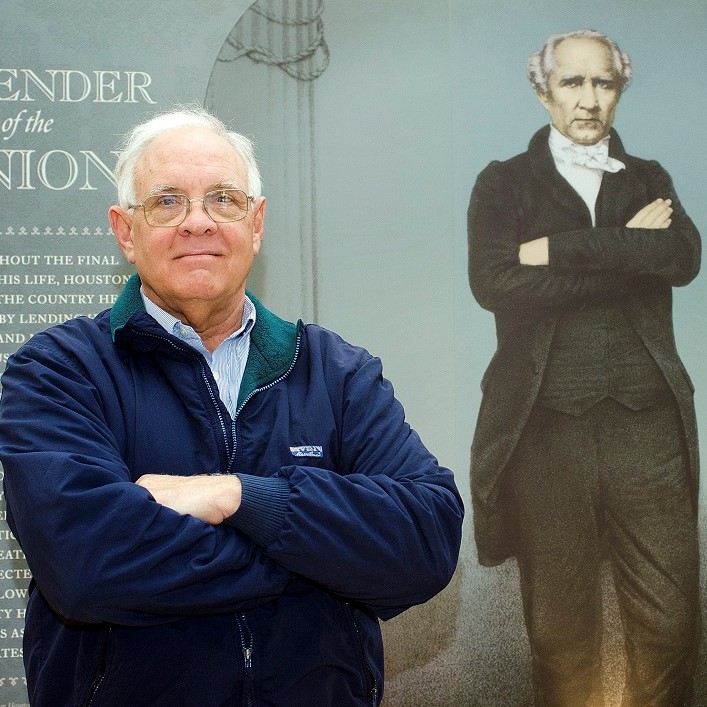 Mac Woodward has announced his decision to retire as director of the Sam Houston Memorial Museum this month after 27 years of service to Sam Houston State University.

“It has been a privilege and honor,” Woodward said. “I want to extend my gratitude to everyone over the years for their support of the museum. With the great staff there, I know the museum will continue to be a proud member of the university community and honor our namesake.”

A fellow Bearkat, Woodward earned a Bachelor of Arts in history at SHSU in 1970. Following graduation, he worked at First National Bank of Huntsville and Louisiana-Pacific Corporation.

In 1994, he received his master’s in history from the University of Houston and began an internship at the Sam Houston Memorial Museum. He then quickly joined museum staff as a historical interpreter. The following year, he was named curator of collections, responsible for all the museum’s holdings and historic buildings.

In addition to his work with SHSU, Woodward was also devoted to public service. In 2003, he became Ward 2 City Council member, and was elected Mayor of Huntsville in 2011.

In 2012, Woodward was promoted to director of the Sam Houston Memorial Museum.

For many years, the museum has been successful in engaging K-12 students and the public as a historical learning experience.

“Under Mac’s leadership our museum has seen outstanding progress,” Frank Holmes, vice president for University Advancement, said. “The educational and research mission has been a top priority for him. This is evident in the work he and his team have made with continued growth, including many new avenues that integrate the museum into the university community and well beyond.”

In addition to hosting countless General Sam Houston Folk Festivals, Woodward has been involved in several special projects including serving as project manager on the restoration of three historical cabins on the museum grounds.

Another project, still underway that Woodward helped initiate, is the future creation of the Sam Houston Republic of Texas Presidential Library to be a clearing house for information on – and artifacts of – Sam Houston.