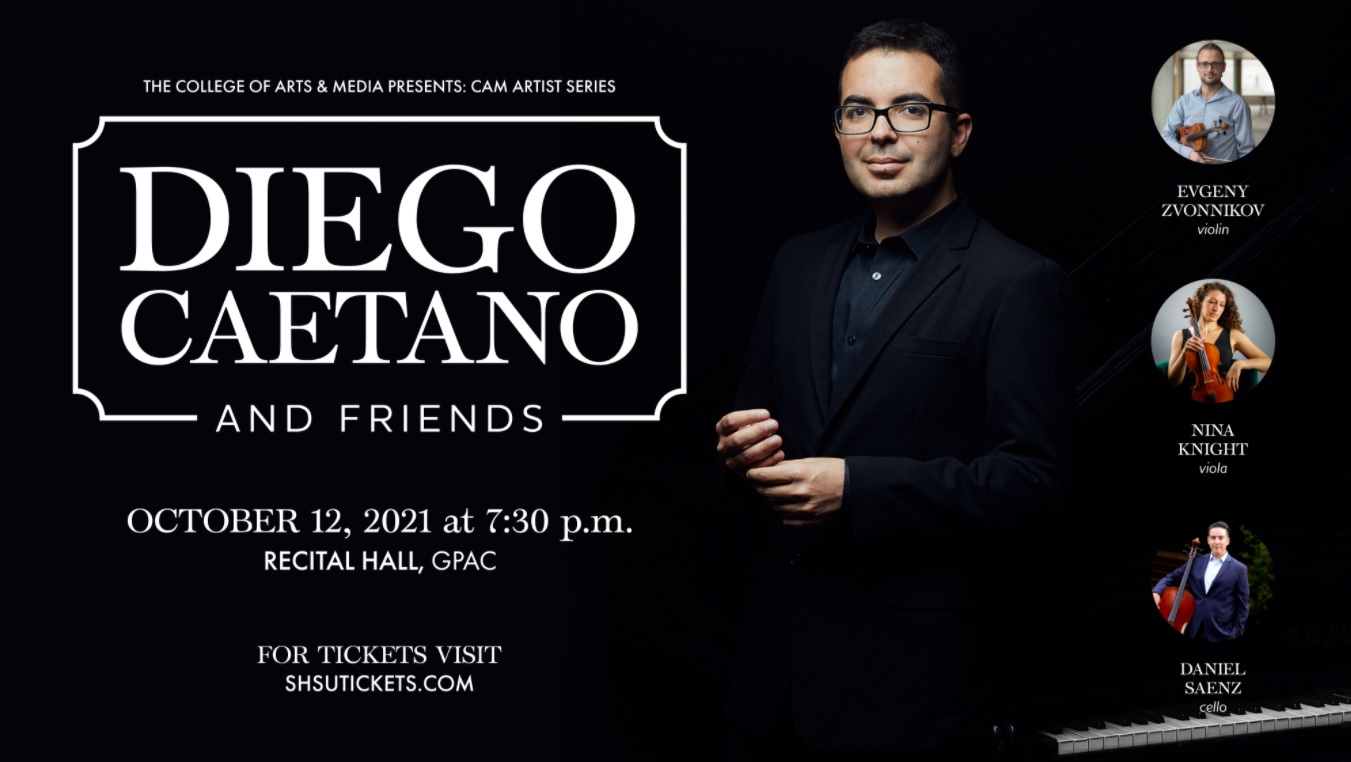 The College of Arts and Media at Sam Houston State University is proud to present “CAM Artists Series: Diego Caetano and Friends” featuring performances by School of Music faculty members Diego Caetano, Nina Knight, and Daniel Saenz, as well as special guest violinist Evgeny Zvonnikov. The concert will take place on Oct. 12 at 7:30 p.m. in the James and Nancy Gaertner Performing Arts Center.

Caetano describes the performance as an evening filled with romance, and he looks forward to sharing the stage with his fellow musicians. The concert will feature works by Schumann, Ravel, Chopin, and the Brazilian composer Luciano Gallet, as well as solo pieces by Chopin and a finale with some of the most beautiful music ever written by Schumann - the Piano Quartet, which was written as a dedication to Clara, his wife and lifelong lover.

Caetano and Zvonnikov will be performing both as soloists and as the Golden Music Award-Winning chamber group, Duo Lispector. They formed the group four years ago, playing their respective instruments of the piano and violin. Earlier this year, Duo Lispector submitted a performance to the Golden Music Awards and won first prize, which includes a performance at Carnegie Hall in New York City later in October. The two have both previously performed in the esteemed hall separately and are very excited to be playing there again, but together for the first time. As musicians, they believe that being recognized for their hard work also serves as a sign that they are headed in the right direction.

Caetano does not see winning as a competition, but rather as a reason to practice, learn new repertoire, and most importantly to him, a way to meet new people and network. Having taught music since the age of thirteen, he has gained a lot of experience as both a performer and teacher, and he believes that, with teaching, compassion goes a long way.

“Performing makes me a better teacher, and teaching makes me a better performer. I can bring experience into the studio, such as my views about music, views of people who I saw performing, and experience from my own former teachers,” Caetano said. “I can also meet the student where he/she is and build from there. I don’t believe in the old school way of ‘destroying’ the student so that they can grow stronger. I think compassion does the same job, and it is more in line with what music is about.”

An experienced teacher as well, Zvonnikov serves as a lecturer at West Texas A&M University and attributes his teaching philosophies to the techniques he has gained from performing.

“When I prepare for a competition or a performance, I discover new ways to prepare and learn, such as ways to deal with performance anxiety. I then share those discoveries with my students,” Zvonnikov said. “Usually, I know my performance schedule one year in advance which helps me plan carefully to make sure that my travels won’t influence their progress.”

Aside from teaching and their upcoming performances, Duo Lispector is also preparing for the release of their debut album and planning an international tour. Caetano is currently recording not one but four solo albums, including one dedicated to Chopin, one with Winterreise by Schubert with tenor Richard Resch, one with French pieces of the 20th century, and another with Brazilian pieces for solo piano.

Also performing in the CAM Artist Series are SHSU School of Music faculty members Nina Knight, viola, and Daniel Saenz, cello. Knight enjoys a versatile career as a performer and pedagogue. Performance and teaching opportunities have taken her to concert halls and universities in the United States, Europe, and Asia. In recent years she has performed with the Kolonneh String Quartet, the Axiom Quartet (2015-2018), Aperio, and the Texas New Music Ensemble. As a collaborative artist she has premiered works for string quartet, viola and piano, viola and cello, and viola and dance.

Saenz is a graduate of the Eastman School of Music, Rice University, and the University of Houston. He is a committed music educator and frequently presents clinics and masterclasses for strings players of all ages. He is also the Executive Director of Brazos Music, a nonprofit dedicated to supporting music education in public schools, and the Educational Outreach Coordinator for Aperio, Music of the Americas.

Tickets for CAM Artist Series: Diego Caetano and Friends are $15 and can be reserved on the Box Office website. For ticket information, please contact the Box Office at 936-294-2339 or email tickets@shsu.edu.