Manatees don’t live year-round in Texas, but these gentle, slow-moving sea cows are known to occasionally visit, swimming in for a “summer vacation” from Florida and Mexico and returning to warmer waters for the winter. 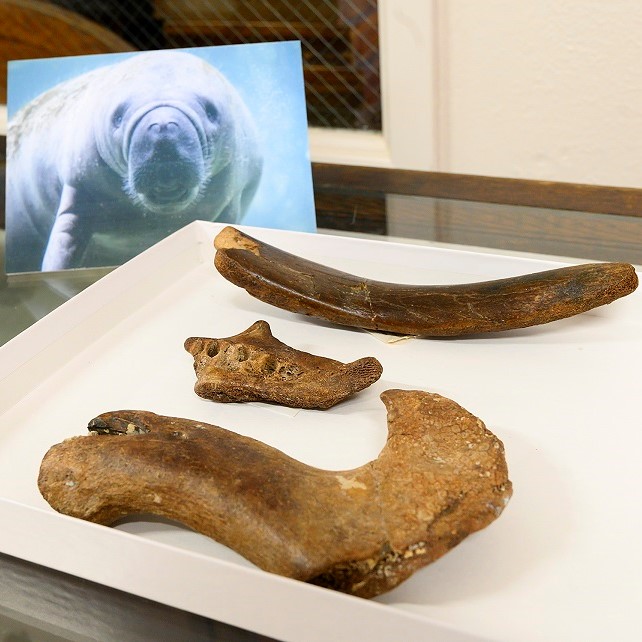 Research with professors from The University of Texas at Austin and Sam Houston State University found fossil evidence for manatees along the Texas coast dating back to the most recent ice age. The discovery raises questions about whether manatees have been making the visit for thousands of years, or if an ancient population of ice age manatees once called Texas home somewhere between 11,000 and 240,000 years ago.

The findings were published in Palaeontologia Electronica.

“This was an unexpected thing for me because I don’t think about manatees being on the Texas coast today,” said lead author Christopher Bell, a professor at the UT Jackson School of Geosciences. “But they’re here. They’re just not well known.”

SHSU students, Scott Golightly and Quenton Hegel, were active participants in the research. When Bell planned a visit to the Smithsonian at one point to consult with manatee experts there was concern about the specimens being lost or damaged. SHSU professor, Pam Zelbst, who serves as director of the Center for Innovation & Technology came up with a solution. Her students scanned the fossils and printed exact replicas as an aid to the research and as a safeguard against loss.

The eight fossils described in the paper include manatee jawbones and rib fragments from the Pleistocene, the geological epoch of the last ice age. Most of the bones were collected from McFaddin Beach near Port Arthur and Caplen Beach near Galveston during the past 50 years by amateur fossil collectors who donated their finds to the SHSU collections.

“We have them from one decade to another, so we know it’s not from some old manatee that washed up, and we have them from different places,” Godwin said. “All these lines of evidence support that manatee bones were coming up in a constant way.”

The Jackson Museum of Earth History at UT holds two of the specimens.

A lower jawbone fossil, which was donated to the SHSU collections by amateur collector Joe Liggio, jumpstarted the research.

“I decided my collection would be better served in a museum,” Liggio said. “The manatee jaw was one of many unidentified bones in my collection.” 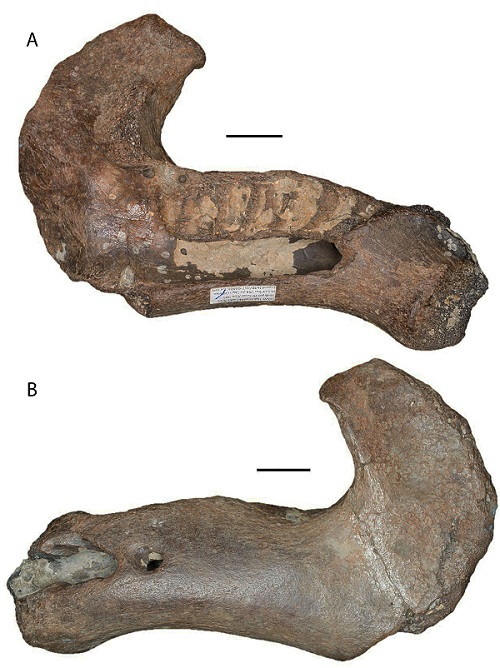 Manatee jawbones have a distinct S-shaped curve that immediately caught Godwin’s eye. But Godwin said he was met with skepticism when he sought other manatee fossils for comparison. He recalls reaching out to a fossil seller who told him point-blank “there are no Pleistocene manatees in Texas.”

But examination of the fossils by Bell and Lewis proved otherwise. The bones belonged to the same species of manatee that visits the Texas coast today, Trichechus manatus. An upper jawbone donated by U.S. Rep. Brian Babin was found to belong to an extinct form of the manatee, Trichechus manatus bakerorum.

The age of the manatee fossils is based on their association with better-known ice age fossils and paleo-indian artifacts that have been found on the same beaches.

It’s assumed that the cooler ice age climate would have made Texas waters even less hospitable to manatees than they are today. But the fact that manatees were in Texas — whether as visitors or residents — raises questions about the ancient environment and ancient manatees, Bell said. Either the coastal climate was warmer than is generally thought, or ice age manatees were more resilient to cooler temperatures than manatees of today.

The Texas coast stretched much farther into the Gulf of Mexico and hosted wider river outlets during the ice age than it does now, said Jackson School Professor David Mohrig, who was not part of the research team.

“Subsurface imaging of the now flooded modern continental shelf reveals both a greater number of coastal embayments and the presence of significantly wider channels during ice age times,” said Mohrig, an expert on how sedimentary landscapes evolve.

If there was a population of ice age manatees in Texas, it’s plausible that they would have rode out winters in these warmer river outlets, like how they do today in Florida and Mexico.