College of Arts & Media Dean, Ronald E. Shields established the award in 2018 to recognize individuals who through distinctive professional accomplishments, personal integrity and service have built a legacy for SHSU students.

“I am honored to present our Legacy Award to someone who exemplifies what it means to live a life of service, an individual whose life and career continues to build bridges,” Shields said. “For more than a decade, Peter has mentored and guided hundreds of students along their paths to professional careers. His name now follows our first Legacy Award recipient, Dan Rather, who received the inaugural award last year.”

Taking to the Gaertner Performing Arts Center stage to accept his award, Roussel thanked the many people of the campus community who have played important roles in his academic career. 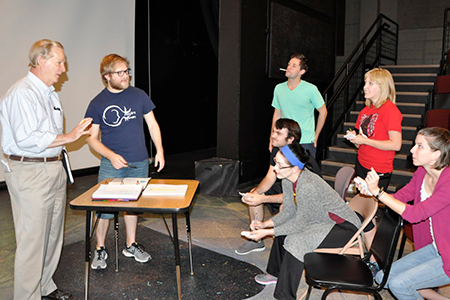 “All of them have truly made me feel as part of a family. And that’s the way I view Sam—as a family,” Roussel said. “Most importantly, thank you to those individuals here at Sam Houston State who every day serve to inspire, encourage and motivate us all—and for myself provide a fulfillment unlike any other I have ever known. I’m talking about, of course, our fantastic students.”

In 2009, Roussel was appointed to the SHSU Philip G. Warner Endowed Chair and teaches courses on public and media relations. One of his courses, Priority One, is centered on the operation of a public relations firm staffed by students. He is also the advisor to PRSSA, the university’s chapter of the Public Relations Student Society of America.

Drawing upon his years in the White House, Roussel penned “Ruffled Flourishes.” The novel is a satirical look at the trials and tribulations of juggling White House directives with the demands of aggressive journalists. The book was followed by a theatrical play adaption and premiere performance at SHSU.

“I have been fortunate in many ways in my career, but receipt of this Legacy Award from the College of Arts & Media has made for a moment that is especially meaningful for me, one of eternal gratitude and appreciation for this great institution,” Roussel said.