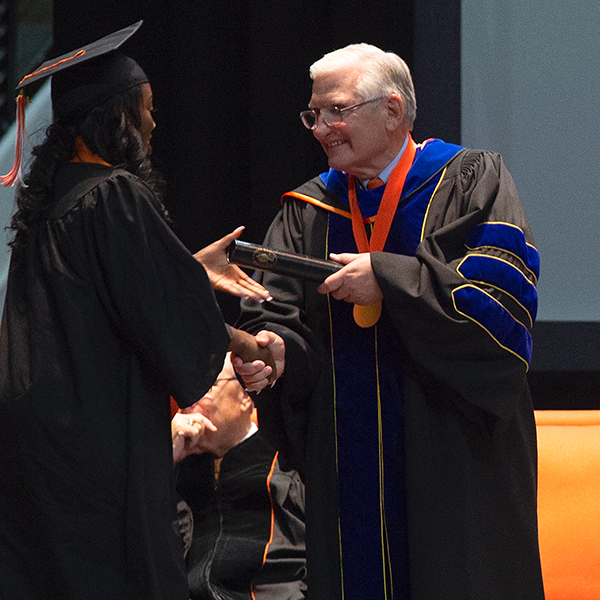 Sam Houston State University Provost Richard Eglsaer is well known for his friendly demeanor and service to others around the university and now that recognition has gone to a national level. Recently, Eglsaer was honored with the William M. Plater Award by the American Association of State Colleges and Universities. The Plater Award is the first national award established specifically to honor and recognize chief academic officers for their leadership in higher education.

“I am honored to receive this reward,” Eglsaer said. “This award is more a reflection of the culture at SHSU and the passion of our faculty and staff who are devoted to civic engagement.”

Numerous letters of support were written to the selection committee from departments across campus enthusiastically nominating Eglsaer for this award. 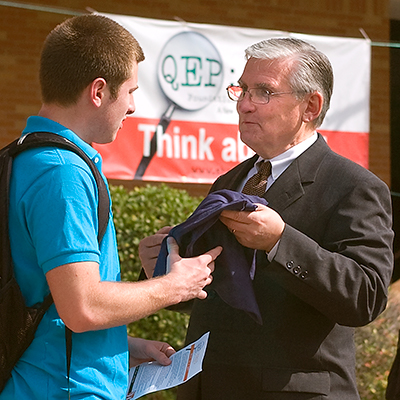 “During his more than 36 years at Sam Houston State, Dr. Eglsaer has worked tirelessly to promote civic engagement as an integral part of this campus,” said Christopher Maynard, vice provost. “His leadership and support are critical in shaping the vision for campus and he is constantly pushing this university to be more engaged and seek out opportunities to move forward and make an impact on students, so that they can make an impact on the world.”

For almost two decades, Eglsaer has been a leader at SHSU with a central focus on student success.  Beginning as an assistant professor of psychology, by 2000, he was associate vice president for Academic Affairs and in 2008 became associate vice provost. Eglsaer has served as provost since 2016, and his engagement with students, faculty and staff has never wavered.

“His initiatives as provost have had an impact on the entire campus and community,” said Mike Yawn, director of the Center for Law, Engagement and Politics. “Campus has become much more geared toward civic engagement in recent years, and the university has developed many key relationships with the community over this same time period. These developments, I believe, reflect a now-firmly entrenched culture—which is, in turn, a reflection of Eglsaer’s leadership as Provost.” 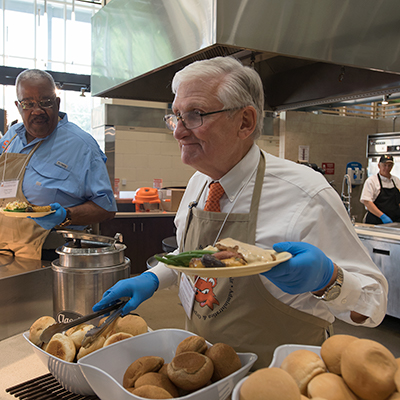 Over the years, Eglsaer has founded many student success initiatives at SHSU, including the first-year programs. Whether helping students develop effective study habits, or fostering relationships with professors and peers, the programs were all established to impact academic and professional success for students.

“What he has established has been instrumental in providing both students and the community  with a sense of belonging and connection, a sense of purpose, and these practices have had a substantial impact on the success of first-year student retention,” said Kay Angrove, director of the First-Year Experience & Student Success. “Dr. Eglsaer stands out as an articulate and perceptive leader in recognizing and validating personhood. I have been most impressed with his approach to student issues and his ability to direct the dialogue to a more reflective and perceptive level for students and colleagues alike.”