Meet The Bearkat Behind The Scenes Of HBO 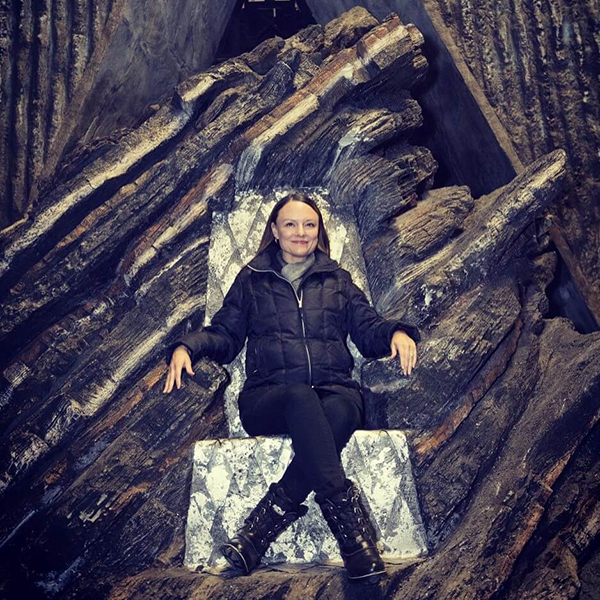 Millions of fans across the country will soon be watching the end of a favorite TV series, Game of Thrones. As the characters on screen fight to see who controls the seven kingdoms, few people know there has been a Bearkat behind the scenes at HBO enjoying every moment of the G.O.T. hype.

Kelley Colello Carville graduated from Sam Houston State University in 2000 with a major in Radio and Television and a minor in Broadcast Journalism. Carville decided to chase her dreams of working in television and moved to Los Angeles following graduation where she got her start working as a page at NBC. After moving her way up to both a senior publicist and press manager at NBC, Carville accepted a position at HBO in 2006, and was announced as vice president of media relations in 2017. She credits SHSU for her drive and confidence in the television industry.

“The hands-on experience I received at SHSU really provided me with a true sense of what it would be like ‘in the real world’ which has proven to be invaluable,” Carville said. “I would be remiss to not mention the incredible faculty that really took the time to discuss our career paths with us post-graduation and encouraged us all to dream big.”

Carville, a member of Alpha Delta Pi sorority and PRSSA during her time at Sam Houston State, claims to be a bit of a nerd, saying her favorite memory was grinding over many all-nighters during a final project in a media production class. She says she took that attitude which led to an “A” and applied it to her career and encourages new graduates to do the same.

“Every goal, no matter how out of reach it might seem, begins with that all-important first step,” Carville said. “Take the step, ignore the voices both internally and externally that try to deter you, be willing to work harder than you’ve ever worked, and you will be well on your way.”

Wrapping up one of the biggest shows in the history of television leads to many people having to be on their “A-game” at all times.

“From actors, set decorators and costume designers to post-production supervisors, location managers and unit photographers, I have been incredibly fortunate to work with some of the most talented people in this business that are so passionate about their craft,” Carville said. “To get to go to work and be inspired is something I don’t take for granted.”

Carville is a mother of three “little dragons,” Colt, Brady and Aidan. According to her husband Justin she never misses a chance to brag about SHSU and Texas while in California and Carville agreed.

“I don’t think it is actually possible to be from Texas and not brag about it,” Carville said. “No matter how long I live in Los Angeles, Texas will always be home and I could not be prouder of being a Bearkat. While my amazing parents raised me with a strong moral compass, sense of self and tenacity, SHSU provided me with the education and tools necessary to go out into the world and make my dreams a reality.”

As vice president of media relations, Carville oversees all aspects of press and publicity for the original series, limited series, comedy specials, documentaries and late-night programming. If there is a red carpet, photo shoot, media circuit or any event where HBO talent is involved there is a good shot Carville is near by or had a hand in making it happen. While her duties go well beyond Game of Thrones, she explained that, like most fans, she will be sad to see it wrap up.

“Game of Thrones has been an extraordinary, humbling and massively educational experience,” Carville said. “I’m beyond proud to have been even a small part of it and I’ll admit to feeling a bit emotional about it all coming to an end.”

As for any spoilers on the finale, Carville channeled a fan favorite character in Arya Stark.