SHSU To Rope In Audiences With Hit Musical ‘Oklahoma!’ 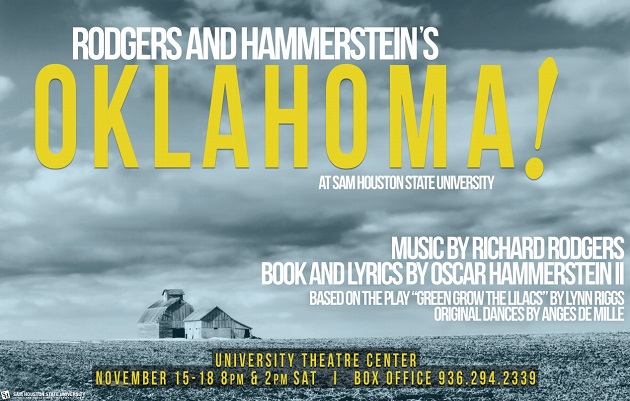 Set in the Oklahoma Territory just after the turn of the 20th Century, the spirited rivalry between the local farmers and the cowboys provides the backdrop for the love story between a handsome cowboy and a beautiful farm girl.

With memorable songs such as “Oh, What a Beautiful Morning,” “Surrey with the Fringe on Top,” and the title song “Oklahoma,” the show pulses with the promise of a land on the verge of transformation.

Based on Lynn Riggs’ 1931 play, “Green Grows the Lilacs,” the musical is full of dramatic themes.

Those themes include working to come together despite differences, putting community values ahead of self-interests, and respecting and cherishing those who occupy the land.

“Oklahoma!” remains one of the groundbreaking musicals in the history of musical theatre. It was one of the first musicals written by the team of composer Richard Rodgers and librettist Oscar Hammerstein II. It epitomized the development of the “book musical” where the songs and dances are fully integrated into the story telling.

Before “Oklahoma!,” musicals focused on humor with big production numbers, novelty acts and specialty dances, but little dramatic development. With Hammerstein crafting the lyrics and a fundamental part of the story, the songs could develop and intensify the story telling.

The 15-minute “dream ballet,” choreographed by Agnes de Mille, was the first of its kind using dance to forward the plot and reflect the internal, emotional struggle of one of the leading characters. Both the music and dance evolved to create powerful, groundbreaking story telling.

The Erica Starr Theatre is located in the University Theatre Center at 1740 Bobby K. Marls Drive and 17th Street between the Newton Gresham Library and James and Nancy Gaertner Performing Arts Center.