Frank Holmes, vice president of university advancement at Sam Houston State University, has been elected as the 2017-2018 chairman of the board for The Woodlands Area Chamber of Commerce.

The Woodlands chamber is one of the largest and most influential business associations in the Houston region that works with business and civic leaders for the advancement of South Montgomery County. 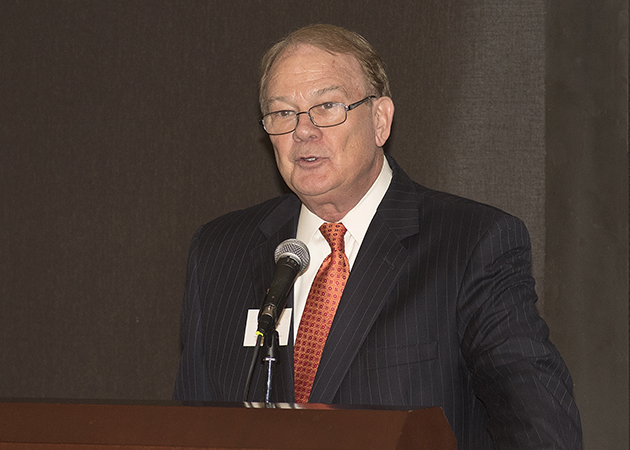 “At Sam Houston State University, we strive to be the best at educating the next generation of professionals,” he said. “Regardless of the size of a business, employers need workforce-ready graduates. I believe my position at the university brings a unique perspective to my role at the chamber and allows me to be an effective bridge between the business community and higher education.”

SHSU has a significant presence in the region with over 22,000 alumni living in The Woodlands area. Since 1997, SHSU has been offering courses in Montgomery County. Strong enrollment growth in locally provided programs led to the construction of the SHSU-The Woodlands Center, a 144,164 square foot facility, which offers upper-level undergraduate and graduate degrees. TWC also hosts a number of student and community services.

Holmes is in his 15th year as SHSU’s vice president for university advancement. The advancement division encompasses the departments of advancement services, alumni relations, development, marketing and communications, and the Sam Houston Memorial Museum.

He oversees a division with 58 full-time staff positions and 35-50 part-time student employees with combined annual expenditures of more than $5 million.

During his tenure at SHSU, annual private giving has increased from less than $2 million in 2003 to more than $16 million. The university's first comprehensive fund-raising campaign was completed in August 2010, surpassing the $50 million goal by more than $11 million.

In December 2011, the university received a $25 million commitment, which is the largest in its history. The university launched its second campaign on Jan. 28, 2017, announcing a $125 million goal.